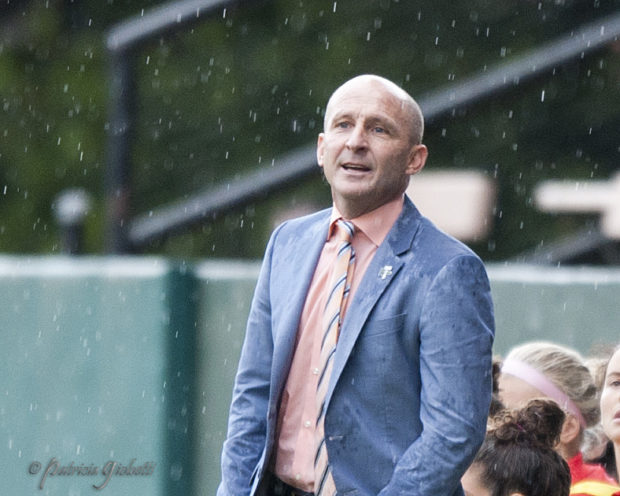 Paul Riley is officially the head coach of the North Carolina Courage. (Photo Copyright Patricia Giobetti for The Equalizer)

“We’re thrilled to have the opportunity to work with Paul,” Courage president and general manager Curt Johnson said. “The success that he’s had throughout his career speaks for itself, in particular, winning the championship last year. He likes great attacking soccer, and that’s something that we are excited to bring to the Triangle.”

Riley is a longtime youth coach on Long Island where he has worked with current national team players Allie Long and Crystal Dunn. He gained prominence at the professional level for his two seasons with the Philadelphia Independence in WPS. The Independence reached the final both years and both years Riley was named Coach of the Year. His NWSL career consists of two seasons in Portland and last year with the Flash. He took the Thorns to the playoffs in 2014, losing in the semifinals, but beset by injuries and inconsistencies, they missed the playoffs in 2015 and fired Riley.

In Western New York, Riley set a positive tone for a young group that did not connect with previous coach Aaran Lines. The 2016 Flash were the surprise of the league and despite a late-season slump, upset the Thorns in Portland to win the semifinal. In the NWSL Championship against the Spirit, they tied the match with seconds to go in extra time and prevailed on penalties.

“I’m extremely excited and humbled to be the first head coach of the Courage,” Riley said. “Sincere thanks to Steve and Curt for this brilliant opportunity. Obviously last year was memorable, but we all understand we are entering a new market and the joy with any season is in the doing of the tasks and in the journey itself, however long or difficult. The challenge will be embraced by all of us, and we look forward to pushing our limits, believing in the process and bringing quality football to one of the true fabulous soccer area’s in the country.”