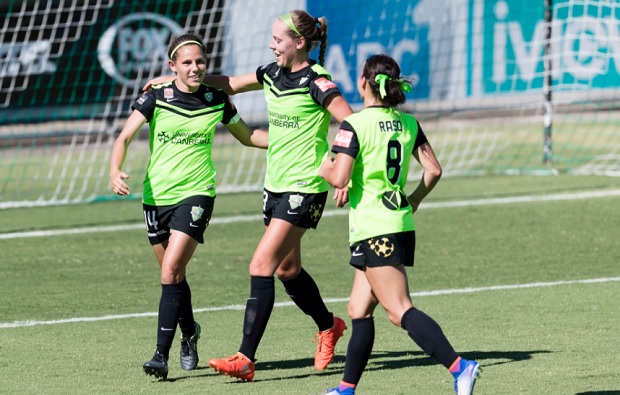 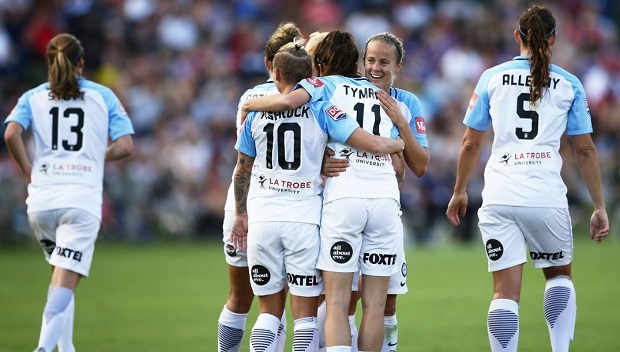 Reigning champions Melbourne City won its second game in a row after going winless for six consecutive matches to clinch a playoff spot over Newcastle Jets (2-0) on Friday, January 27. The Jets entered the match two points behind City and needed a win to clinch their first playoff berth since 2008/09, but 3,570 Jets fans went home disappointed as Erika Tymrak (FC Kansas City) scored from close range in the 55th minute and former Australian U-20 midfielder Amy Jackson sealed the win on a long range scorcher in injury time. Tymrak’s goal was her second of the year, while Jackson scored her first. Newcastle can be pleased with its effort, finishing with 15 points, tying for second in all-time points in a season with 2014/15 (12 games) and only two behind its 2008/09 record of 17 points in 10 games. Newcastle scored 18 goals—double their total from last season—led by Jen Hoy’s z and Jenna Kingsley’s five goals each, while Arin Gilliland chipped in four—three coming last weekend in their 3-1 defeat of Sydney FC away.

For City, NWSL loanees Lydia Williams (Houston Dash), Laura Alleway (Orlando Pride), Steph Catley (Orlando Pride), Jess Fishlock and Lauren Barnes (both Seattle Reign) played the entire match while Erika Tymrak (FC Kansas City) subbed out in the 76th minute for Jackson. New Zealand-international Rebekah Stott—a recent Seattle Reign signing for 2017—also played the full match, while Larissa Crummer—who signed with the Reign this week—has been out of action since Week 12 with a broken foot and will miss the playoffs.

The champs are heading to the finals! ?#BeReal #BeRemarkable pic.twitter.com/njl01Z5npq

Canberra used braces by 2016/17 Westfield W-League Golden Boot winner Ashleigh Sykes and Japanese-international Yukari Kinga to defeat Melbourne Victory 5-1 on Saturday, January 28. Seventeen-year-old Australian youth international Grace Maher scored once for her third tally of the season, the same as Kinga. Sykes’ first goal came when she was taken down in the box by Samantha Johnson (Chicago Red Stars) and scored with the ensuing penalty kick. Sykes and Kinga each scored during second half injury time. Melbourne’s lone goal came from Christine Nairn in the 49th minute. Canberra’s win, combined with Sydney FC’s loss in Adelaide, gave Canberra the Premiership (regular season) title for the third time in history (2011/12 & 2013/14) and the right to host a semifinal and Grand Final if they defeat reigning champions Melbourne City next week.

For Melbourne Victory, Christine Nairn (Seattle Reign), Natasha Dowie (Boston Breakers) and Johnson played the entire match. Goalkeeper Bianca Henninger (Houston Dash) did not play, out on international duty with Mexico ahead of a friendly with Canada in Vancouver on February 4, in which the Canadians will celebrate their second consecutive Olympic Bronze medal.

Adelaide extended its undefeated streak to six straight with a 5-2 defeat of Sydney FC at home on January 29, costing the Harbour City club the chance to win the premiership for the third time in its history (after 2009/10 & 2010/11). Adriana Jones scored twice while defender Emily Hodgson and forward Sofia Huerta (Chicago Red Stars) each scored once. Sydney’s Servet Uzunlar scored an own goal just after halftime. Second-half substitute Remy Siemsen scored two goals in three minutes to tie the game up just before the hour mark (her fifth and sixth of the season to lead the club) but Hodgson, Jones (from the penalty spot) and Huerta goals cemented the win. The season finale drew 2,334 to Coppers Stadium in Adelaide.

Adelaide ended the year with 14 points, an all-time club record and finished second in the league in scoring behind Canberra’s 33 with 31 goals. Ten of those came in Round 12 in a 10-2 defeat of Western Sydney Wanderers, and 19 came in their last 4 games. Jones led the team in scoring with 9 goals, followed closely by Huerta with 8.

The loss, combined with Canberra United and Perth Glory victories, saw Sydney fall from first in Round 13 to third place in the final league table, causing them to have to travel to Perth to meet the Glory in next weekend’s semifinal. Two years ago, at the same stage, they fell to the Glory 3-0 in Perth, who made the Grand Final in only their second season in the playoffs. We will know over the next two weeks if Perth can be third time a winner for a Grand Final Title to go with its Premiership crown in 2014/15.

Perth left it late, but Caitlin Douglas scored two minutes into injury time to give the Glory a 1-0 win and a tie on points at the top of the standings with Canberra on Sunday, January 29. Though Perth finished second on an inferior goal difference to Canberra, they still host Sydney FC, who entered the weekend with the lead but were undone in Adelaide.

For Perth, Alyssa Mautz and DiBernardo (both Chicago Red Stars) and Ari Romero (ex-Houston Dash) played the entire match, while Nikki Stanton and Samantha Kerr (both Sky Blue FC) missed the game with a one-game suspension from ejections in last week’s game. Kerr finished second in the Golden Boot race with 10 goals to Ashleigh Sykes’ dozen.

Brisbane Roar had a bye this week.