Savannah Jordan, the second all-time leading goalscorer from the University of Florida, signs with Glasgow City FC for 2017 (Copyright: Steve Bruno for The Equalizer)

Glasgow City FC announced its signing of American forward Savannah Jordan this past weekend. The Portland Thorns drafted Jordan with the No.18 overall pick at the 2017 NWSL College Draft two weeks ago, however, they were aware that she would be playing in Europe for the season.

The 21 year-old striker finished off her college career at the University of Florida this past fall after earning four NSCAA All-American honors — the only player in school history to be able to do that. With 81 goals and 27 assists over four years, she became the school’s second highest career goal-scorer, that is, second only to U.S. legend Abby Wambach.

In addition to her success at the collegiate level, Jordan has 23 caps with U.S. youth national teams, most recently with the U.S. U-23 women’s national team at the Nordic Cup this past June. She, however, was not included in the most recent U-23 camp earlier this month in California.

Did @christierampone confirm her playing plans for 2017? Find out in Episode 002 of #SBFCdiary!

The 41-year old is a two-time World Cup Champion and three-time Olympic gold medalist who remains the second-most capped U.S. player in history with 311 appearances. Rampone did not make the Rio 2016 Olympic squad after withdrawing from U.S. women’s national team camp before it started in May ahead of the Olympic games. Her last appearance with the U.S. women’s national team dates back to September 2015.

Christie Rampone being honored for her 300th cap during CONCACAF World Cup qualifying in 2014. (Photo Copyright Erica McCaulley for The Equalizer)

The New Jersey native’s 2017 NWSL season will be her fifth consecutive season at Yurchak.

The Mexican Football Federation announced its 23-player roster today for the women’s national soccer team’s first training camp of the new year. The camp will be in preparation for the team’s friendly against Canada scheduled for February 4 in Vancouver. The roster includes some veterans in Monica Ocampo and Teresa Noyola, but also some new faces as well. Seven invitees most recently played for Mexico in the 2016 U-20 FIFA Women’s World Cup in Papa New Guinea where Mexico was knocked out by the United States are dropping the quarterfinal match 2-1.

Even with a roster announcement, it still appears that the team lacks a head coach. Leonardo Cuellar stepped down as the Mexican manager in April 2016 and there has been no official permanent boss named since then. 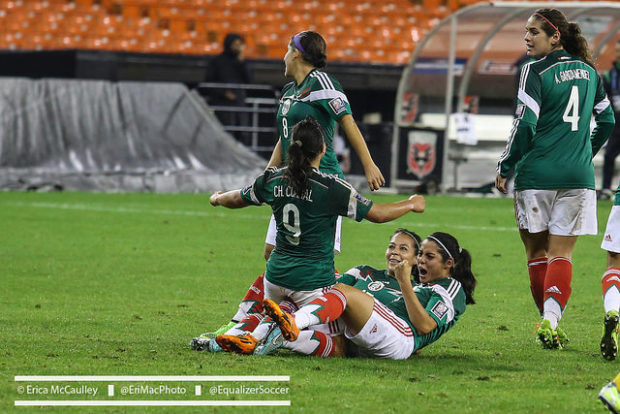 Mexico missed out on last summer’s 2016 Rio Olympic games after failing to qualify during the 2016 CONCACAF Women’s Olympic qualifying tournament where they lost to Costa Rica in the quarterfinal round. They were, however, at the 2015 FIFA Women’s World Cup in Canada. The team failed to advance past group play after earning only one point in Group D.

The AFC Asian Cup Qualifiers draw was announced today. The group winners will advance to the 2018 AFC Women’s Cup in Jordan set to take place in May. Japan, Australia, and China automatically qualified along with hosts Jordan. From there, the top five teams qualify for the 2019 FIFA Women’s World Cup in France.

With the above draw, it is impossible for both Korea Republic and DPR Korea, two of the stronger teams in the qualifying tournament, to make it to the Asian Games and furthermore the 2019 World Cup.

**-Jordan requested to play in the qualifying tournament even though they qualify automatically as hosts. If they win Group A the runner-up will qualify for the Asian Cup.

Kendall Fletcher to play with Sydney University after W-League season

Over the weekend, Heather Garriock, head coach of Sydney University, announced that defender Kendall Fletcher will be playing with them this NSW NPL season. Fletcher currently plays for the Western Sydney Wanderers in the W-League where she was on loan from Seattle Reign FC. This announcement of her inclusion on Garriock’s club comes on the heels of Fletcher’s announcement last week that  she will be leaving Seattle Reign FC and beginning a ministry program at Hillsong International Leadership College in Sydney, Australia.

Coach of Sydney University @HeatherGarriock announces that @kendallfletcher will be playing with them this NSW NPL season.