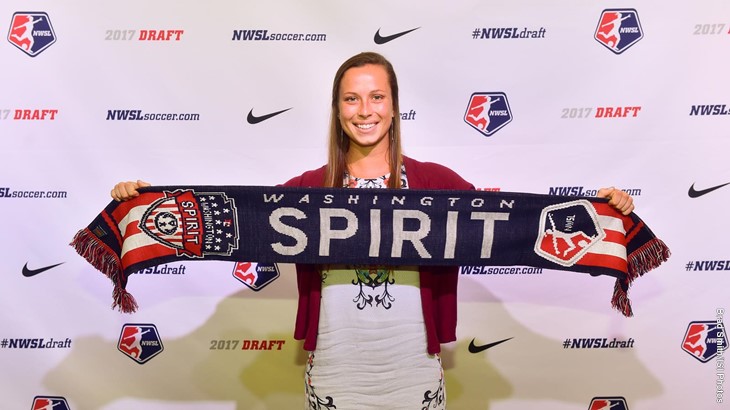 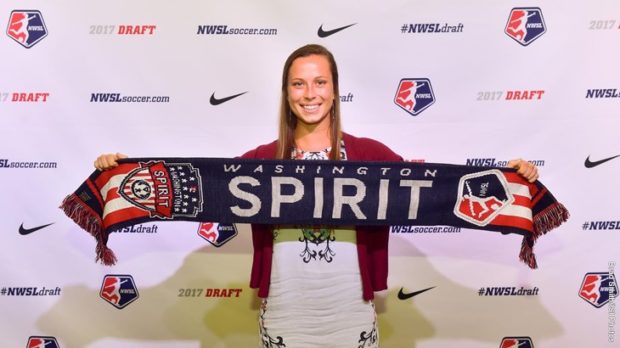 Unlike most of this NWSL off-season, the Washington Spirit did not dominate headlines at the 2017 draft. After offloading two first-round picks in exchange for Kristie Mewis, Kassey Kallman and the first spot in the allocation order, the Spirit were kept off the board until nearly halfway through the draft.

As far as the team’s strategy with the draft, head coach Jim Gabarra said that while the draft had a lot of forward talent, a lot of teams had need for defenders. With that in mind, the club was comfortable not drafting until late in the second round.  The Spirit were convinced some enticing options for the forward line would still likely be available.

“We actually had three players in mind for that (No. 19) pick, and they were all three still on the board and we were hoping one of them would be there,” Gabarra said. “So it worked out very well of us there having such a strong defensive group….”

With its first selection, the Spirit chose Ohio State product Lindsay Agnew, who was recently called into the Canadian national team’s assessment camp. With Crystal Dunn off to Europe and Cali Farquharson recovering from an ACL injury, Gabarra hopes Agnew, as well as the team’s fourth-round pick (No. 36) North Carolina’s Cameron Castleberry, will add attacking width. He also believes the pair will fit well into the team’s high-pressure style.

Although it didn’t fill an immediate need, perhaps the most intriguing pick is the selection of Florida’s Meggie Dougherty Howard in the third round. Dougherty Howard spent the last two summers playing with the Spirit Reserves team and was part of the 2015 W-League winning side. While in the D.C. area, the holding midfielder also trained with the full team.

“The heart said to go with Meggie Dougherty Howard,” Gabarra said about the pick. “She’s such a good kid, and she really fits in well with the way we play.”

Certainly the Spirit have more pressing needs given the turnover in the off-season and the ACL injuries that plagued the team late last year, but Dougherty Howard is a known quantity. The staff knows how she fits in and what to expect from her and she’s familiar with the environment. Also, with Tori Huster and Joanna Lohman above her on the depth chart, Dougherty Howard will have two veterans to learn from and perhaps time to adjust to the professional level.

On draft day, the midfielder spoke positively of her past experience with the club.

“You know, being with them the past two summers, I grew and developed a lot as a player during that short time, so I can only imagine how much I have to grow,” Dougherty Howard said about being draft by the Spirit.

“I think I’ve learned to just take more risks and play more simple and keep things clean,” she said about her growth. “I understand now a little bit more when you have opportunities to have that creativity moving forward and provide that element kind of a surprise in the attacking areas.”

Being reunited with a key cog from the Reserves system is one of the few bright spots in an otherwise bleak off-season for the Spirit. There’s still many questions that remain unanswered for the team heading into preseason. One of the biggest may be Washington’s acquisition of the top slot in the allocation order, a move for which there’s no clear payoff as yet.

“There is a plan there and some possibilities, but it’s going to take some time for that to kind of evolve,” Gabarra said in regards to the No. 1 allocation spot after the draft.

It remains unclear whether the Spirit will actually benefit at all from holding it. Gabarra’s answer to a question regarding the allocation spot in a January 4th interview with Soccerwire suggested that holding that top spot might not lead to something tangible.

Another question that remains unanswered is how the Spirit will fill its international roster spots. Gabarra maintained after the draft that a return by Estefania Banini, who spent the last two seasons with the club, is a possibility after her contract with Spain’s Valencia CF expires in June.

While Banini’s future with the team is in the air, the team anticipates to fill one of those international spots in the next four months although another may not be used until the back-half of the 2017 season. Add it up and the Spirit could have a roster very much in influx, especially with three players recovering from ACL injuries, to start the season.

“There’ll be some additional players coming in to fight for spots because we’ve got three players coming back from ACL surgeries, so they’re probably not going to be available at the beginning of the season,” Gabarra said.  “It will be a real opportunity for players to come in and earn a contract and then when those players return you kind of have to make a choice on who stays.”

The Spirit can’t replace Dunn. What has been replaced in Washington is the continuity that played a huge role in the club’s most successful season to date. In its stead, the club has ushered in a lot of uncertainty. While the full picture isn’t entirely clear yet, the outlook on Washington’s upcoming season is a near mirror image of 2016.