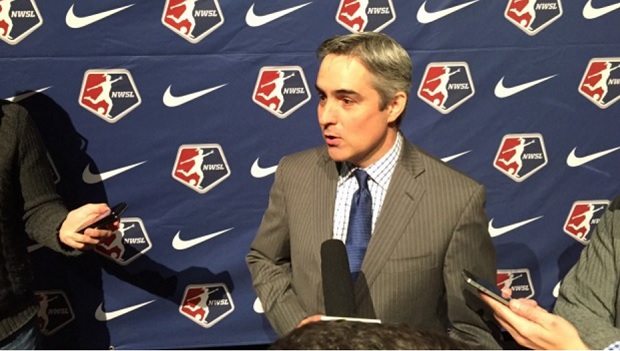 LOS ANGELES – The 2017 NWSL Draft is in the books, preseason fixtures are being announced and rosters for the upcoming season are taking shape. NWSL fan excitement is building with first-kick anticipation awaiting the spring.

Equalizer Soccer caught up with NWSL Commissioner Jeff Plush at the NWSL draft. While he did confirm communication with the Vancouver Whitecaps FC organization, he did not suggest that a franchise was on the horizon for Vancouver.

“I wouldn’t want to certainly speak on behalf of Vancouver,” said Plush. “I would tell you that we’ve had very good conversations with them. Fantastic market, great infrastructure with the Whitecaps with everything they’ve done on the academy side. It’s a very attractive opportunity and we’re enthusiastic about it, but I wouldn’t give a timeline on it.”

At this point in negotiations, it feels as if the NWSL and Whitecaps FC are in a getting-to-know-you stage. Unfortunately, neither side seems to want to fully commit at this stage without exactly knowing what they’ll be getting into long-term.

Vancouver Whitecaps FC President Bobby Lenarduzzi was available following the 2017 MLS SuperDraft in Los Angeles. He provided a small brief update without all the juicy details.

“It’s not something that we can comment on at this stage. Much like it has been, we’re investigating the opportunity, but really can’t say too much,” Lenarduzzi said.

If an NWSL team was to come to Vancouver, would it feature a roster primarily made up of Canadian-international players? What about allocations, and would those Canadian players be on board with playing in Vancouver? Lenarduzzi wasn’t willing to tackle hypotheticals.

“I think that’s probably a little premature to be discussing that,” said Lenarduzzi. “Again, really just right now, it’s a question of an investigating the opportunity. Once we have more to talk about, we can do that.”

Having a team in Vancouver would be tremendous for soccer fans in Canada. For too long, supporters have had to travel to the U.S. to watch their favorite Canadian players. There is no debate about Canada being able to support an NWSL franchise, and Jeff Plush agrees.

“In my opinion, no question,” said Plush.

The pressure is on the NWSL and Vancouver Whitecaps FC to find common ground and bring an NWSL team to Vancouver. When they do, players, fans and media will no doubt flock to support it.