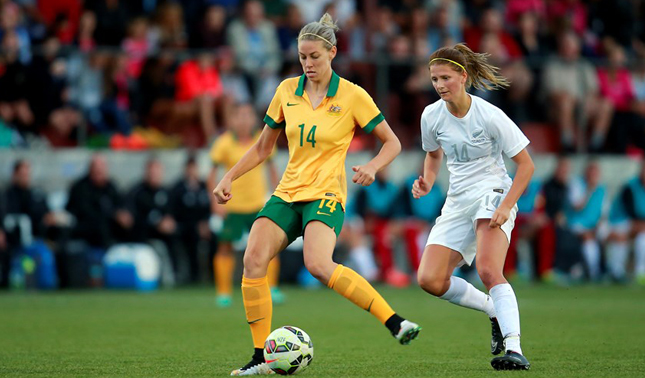 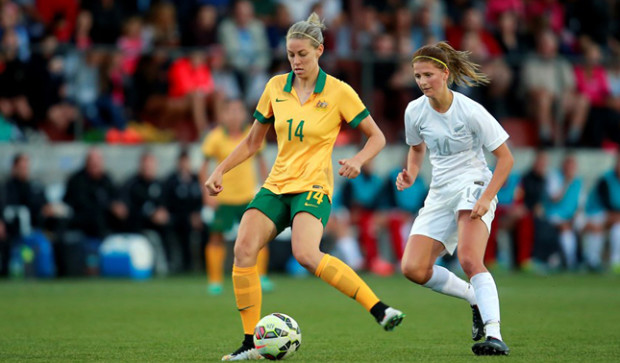 Alanna Kennedy (14) has been traded from the Courage to the Orlando Pride. (photo courtesy Western New York Flash.)

The North Carolina Courage announced today that defender Alanna Kennedy has been traded to the Orlando Pride for defender Sam Witteman.

Kennedy, an Australian international, joined the Western New York Flash in February 2016 for her first year in the NWSL and made 17 appearances for the club, all starts, during their championship run, forming a key part of their backline. She has made 48 appearances for the Matildas since 2012, including the 2015 Women’s World Cup and the 2016 Olympics, where she scored a goal against Zimbabwe. Kennedy is currently on loan with Sydney FC, with whom she previously won both the W-League Championship and Premiership. She will be the most recent in a number of Australians in Orlando, who last season welcomed Laura Alleway, Steph Catley, and Lisa De Vanna.

Witteman was the Pride’s first ever draft pick, taken at No. 10 in the 2016 NWSL draft. She made 16 appearances for the club, moving up and down the flanks at outside back and winger. Witteman was called back to camp with the U-23 USWNT this month after helping the team win the 2016 Istria Cup. She also spent a brief period this offseason on loan to Apollon Limassol in the Cypriot First Division alongside former Seattle Reign player Paige Nielsen. Witteman scored two goals in UEFA Champions League play before the club was knocked out in the Round of 32.

“Sam will be a very valuable addition to the team,” said Courage coach Paul Riley. “She is a quick, good footballer and has a tremendous engine. She certainly fits our mold and her energy level will be infectious. Alanna had a very good season last year, and I would like to wish her all the best in Orlando. On our end, the trade allows the club to open up a foreign slot, and that will be extremely valuable in bringing quality and depth into the present squad.”

“Firstly, Sam has been a fantastic player and a great teammate with wonderful character,” Pride coach Tom Sermanni said. “She will be missed both on and off the field and we are very sad to see her leave the club. We wish her the best of luck in North Carolina. However, in bringing in Alanna we have acquired one of the best center backs in the league and a high-quality, international player. Though she’s just 21, Alanna has extensive experience with Australia and she will be a terrific addition that both strengthens and adds experience to our lineup next season.”