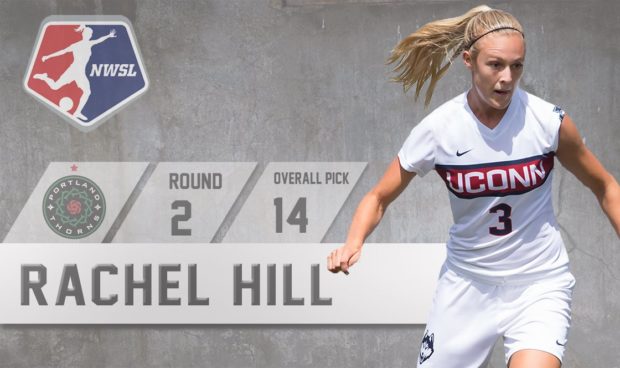 The Orlando Pride acquired the rights to No. 14 overall pick Rachel Hill from Portland Thorns FC in exchange for 1st and 4th round picks in 2018.

A speedy striker with versatility to slot at multiple positions and formations, Hill finished her career at UCONN with 61 goals to rank second in program history behind Moira Buckley.

“Rachel was a player we scouted heavily and rated very highly going into draft day,” Orlando Pride Head Coach Tom Sermanni said. “While we weren’t able to trade up to draft her, we’re happy we were able to make this deal work to bring another goal-scoring option to the roster.”

Hill was rated by some as a 1st round pick and the Thorns were pleasantly surprised to see her on the board at No. 14. But with a deep roster on hand the club jumped at the chance to acquire a second pick in next year’s 1st round.

“Immediately after drafting Rachel we were presented with a trade option,” Thorns general manager and president of soccer, Gavin Wilkinson, said. “With this in mind, we were able to draft a similar quality player in Tyler Lussi.”

The Thorns took Lussi with the 21st pick. In between they drafted Savannah Jordan at No. 18.