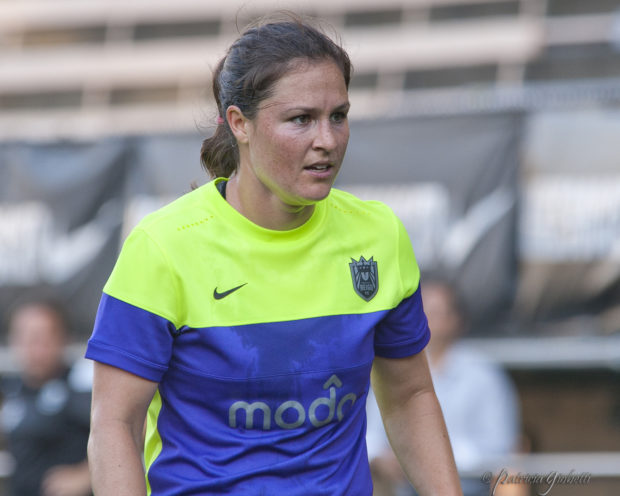 Kendall Fletcher is leaving NWSL to start a ministry program in Australia. (Photo Copyright Patricia Giobetti for The Equalizer)

Kendall Fletcher announced on Monday that she is leaving Seattle Reign FC and beginning a ministry program at Hillsong International Leadership College in Sydney, Australia. The 32-year old defender is currently on loan to the Western Sydney Wanderers and will finish out the W-League season there. Fletcher spent three seasons with the Reign and her arrival in 2014 helped stabilize the back line and led to consecutive Shields.

“Fletch is one of the most competitive, smartest defenders I have ever worked with,” Reign head coach and general manager Laura Harvey said. “Her attitude towards being the best player she can be was unmatched. Her influence on our team was exceptional and she will be truly missed.”

Fletcher made 62 regular season appearances for the Reign, starting all but one. She totaled 5 goals with 3 assists. Fletcher also started all four playoff games in Reign history but her injury in the 2015 NWSL Championship set the stage for the only goal of the match. In the sequence immediately following her departure, Heather O’Reilly attacked her replacement, Elli Reed, and passed to Amy Rodriguez to give FC Kansas City the victory.

“This was an extremely difficult decision for me to make,” said Fletcher. “If I’m honest, there is a part of me that is surprised I had the courage to make this decision. I have never enjoyed myself more in a soccer environment than I have with the Reign. I can honestly say the last three years playing for this club have been the most enjoyable years of my career.”

Fletcher joins Keelin Winters, Kim Little, and Manon Melis as prominent players from last year’s club to announce their departures. Hope Solo remains in limbo after being suspended by U.S. Soccer after which she took the rest of the year off from the Reign.