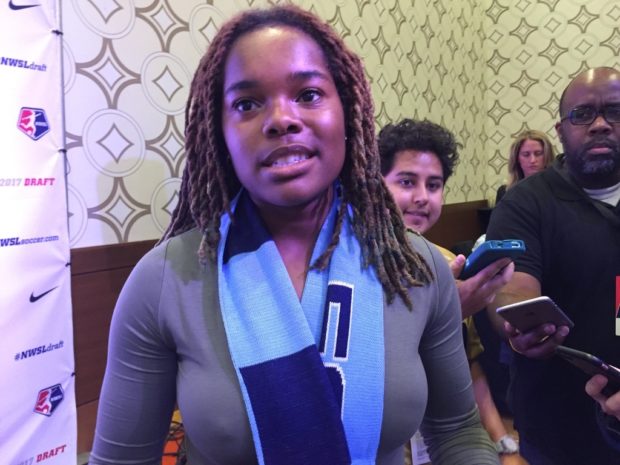 Kayla Mills after being drafted No. 4 overall by Sky Blue FC on Thursday

Christy Holly spent the better part of Wednesday embedded with Sky Blue management in an effort to fine tune the club’s draft strategy. By the close of business Thursday, the second-year head coach was all smiles about his day. The New Jersey club landed Kayla Mills with its natural 1st round pick and then Mandy Freeman with the pick acquired from the Thorns on draft day 2016.

“We were delighted to get Freeman. We thought she would be off the table.”

The USC teammates will take their collective selves to New Jersey where Holly hopes that, among other things, they bring with them some of the experience that helped them win their final college game.

For the moment Mills is pegged as a fullback which will allow Erica Skroski to move back to a central defense role. Freeman, who was under consideration to be taken at No. 4, can play on the back line or in the midfield according to Holly.

“Kayla is what we need in the fullback position, someone who can get up and down the field, but also has that little bit of flexibility to go and play centrally if needs be. With Mandy she can play center back and she can play in the midfield too.”

After securing the USC duo, Holly and Sky Blue stared at a second round that did not include a pick for them. Holly wanted Canadian goalkeeper Kailen Sheridan and he sat, watched, and mostly waited, hoping she would fall to No. 23.

The first round rolled by with no trades or timeouts. The second round began with a break in the action before the Red Stars moved up to take Michele Vasconcelos. At 15 the Dash through a wrench into the keeper market when, to the surprise of everyone, they grabbed Jane Campbell. More trades were made for the 16th, 18th, and 20th picks.

“One of those trades concerned me a bit,” Holly said but did not specify which one.

Sky Blue even called a timeout early in the third round and Holly said they were “close” to making a move to improve their position. Ultimately they decided to wait. With Sheridan still on the board at No. 23, Holly wasted little time.

The Carolines, Stanley and Casey, passed the starting job back and forth in 2016. Both showed potential of being able to develop into solid professional keepers, but it was an open secret that the position was a major area of concern for the club this offseason. Sheridan will add to the competition and most draft observers feel she will go to camp as the favorite to land the starting job.

There was little drama ahead of Sky Blue’s next pick since it was the one right after Sheridan and Holly went with a Jersey girl, Madison Tiernan from Rutgers. “As a jersey girl she understands what it means to play for Sky Blue,” Holly said. “She can play various different positions on the attacking line. That gives us better depth up there—someone we will make our forwards a bit more uncomfortable. It’s a type of player we don’t have. She’s a very robust forward. She can create, she can hit from distance, she can score inside the box.”

Sky Blue closed the third round by taking Sheidan’s Clemson teammate Catrina Atanda and in the fourth nabbed McKenzie Meehan. The Breakers apparently had eyes for Meehan but instead gambled and took goalkeeper Sammy Jo Prudhomme at No. 31, hoping Meehan would be there at 38. Holly made sure she wasn’t.

“We’re happy with what we got. We’re bolting through the lines, we got a defender, someone to play in midfield, we got a goalkeeper, and now we got an attacking player through Madison Tierney. Each player we think are ready to make immediate transitions into the league.”

In Holly’s first draft last season he landed Casey, Skroski, plus NWSL Rookie of the Year, Raquel Rodriguez and explosive forward Leah Galton. That proved to be an exceptional rookie class, but it was one Holly had to push harder than he wanted due to being thin in the ranks up and down the roster.

“Hopefully this year through the depth in our squad we don’t have to drop them in the deep end as much as we did last year.”