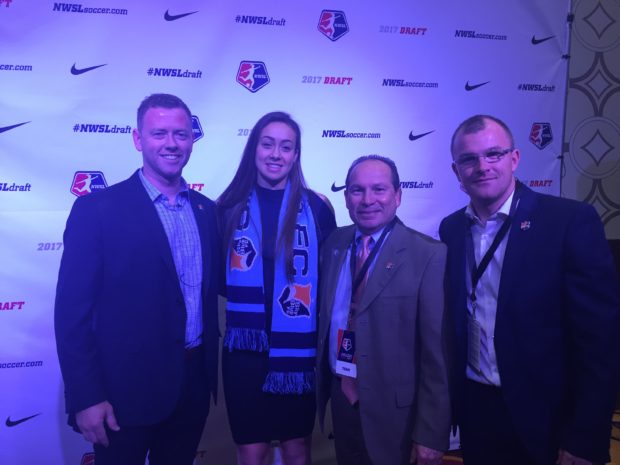 Kailen Sheridan was the first Canadian off the board when Sky Blue took her at No. 23.

Los Angeles, CA. – It was a long wait through the first two rounds of the 2017 NWSL Draft for Whitby, Ontario native, Kailen Sheridan. The Clemson Tigers goalkeeper finally celebrated when she heard her name called 23rd overall by Sky Blue FC. It was a moment she and her family had long dreamed about.

“As soon as I heard it, I just sat for a second and took it in, took a deep breath. I’m glad my mom was here, and my coach is sitting right behind me. I couldn’t be happy.”

Sky Blue FC head coach Christy Holly had been in the market for an upgrade in net. Sheridan wasn’t surprised by her Sky Blue FC selection. Her agent, Jarrod Rogol, had been in touch with Sky Blue FC to see if they were interested in the Canadian international.

“Yeah, I talked to Jill (Loyden, Sky Blue goalkeeper coach) a while ago,” said Sheridan. “She wanted to get to know me as a person, which was super exciting. My agent has been contacting them because they were in need of a goalkeeper. That’s what I’ve been looking for, an opportunity to compete and earn a starting spot.”

Being able to select Sheridan in the third round was a steal for Christy Holly. He was over the moon about the potential, development opportunities for Sheridan with Sky Blue FC.

“She’s fantastic,” said Holly. “She’s comes in with a huge amount of pedigree, she comes in as a player who already has little bit of international experience. I also think it’s a player that hasn’t got anywhere close to her ceiling yet. That’s huge for us, she’s going to come in and face a huge amount of completion from the Carolines (Stanley and Casey). We’re delighted, we’re delighted.”

The 21 year-old, Sheridan will have that opportunity to compete with Sky Blue FC goalkeepers Caroline Stanley, and Caroline Casey. Sky Blue FC can’t afford to have another season with faulty goalkeeping. Sheridan should be the clear preseason favorite to emerge as the number one.

The NWSL is the top priority for Sheridan. Canadian international teammates, Kadeisha Buchanan, and Ashley Lawrence have taken their talents to France. That’s not something Sheridan is interested in pursuing at this stage of her career.

“There’s a few that signed in Europe, and we talked about that growing up,” admitted Sheridan. “It would be a cool opportunity. You also have to think about your position, and what opportunities are there for you. Sky Blue has an opportunity for me right now. I can compete, and earn a starting spot. That’s ultimately what I want. I’m going to do my best to earn that. Europe’s always going to be there. If an opportunity comes to me to earn a starting spot there, maybe I’ll look in to it. Right now my focus is on the NWSL.”

Kailen Sheridan was not the only Canadian selected in the 2017 NWSL Draft. Lindsay Agnew was selected 19th overall by the Washington Spirit and Nichelle Prince was selected 28th overall by the Houston Dash. Both Ohio State Buckeyes forwards have dual Canadian/U.S. citizenship. Neither was in attendance for the draft.