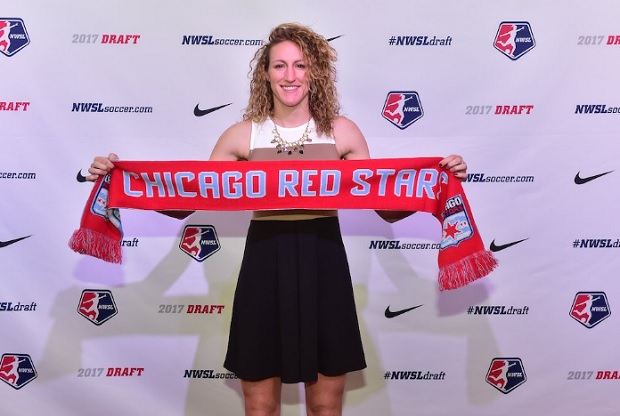 LOS ANGELES—With nearly every player returning from a successful campaign in 2016 and no immediate or glaring needs, the Chicago Red Stars still managed to do a good bit of business in this year’s 2017 National Women’s Soccer League draft.

Proffitt grew up in Indiana and continues Chicago’s long tradition of drafting players with local connections, having played for the Red Stars’ reserve team the past two summers.

“It feels like home,” Proffitt told The Equalizer. “I’m really excited [and] thankful for the opportunity.”

“It went really well for us [today],” conceded Chicago head coach Rory Dames. “I rated Michele as the best [outside midfielder] in the draft and I thought Morgan was the best [defensive midfielder] that would fit with Vanessa [DiBernardo] and Danielle [Colaprico].”

“I wouldn’t be surprised if we get the Rookie of the Year again, that’s how highly I rate those two,” he later added.

Besides their second-round selections, Chicago maintained its crown as master of the trade, negotiating four separate deals during the day—all of which gave the Windy City squad selections higher on the draft board than what they traded away.

Dames explained the selections they picked up for the 2018 draft should be helpful next year if and when the league expands, as they can be used as trading fodder to protect the core of their current roster.

“We got a first-round pick [next year] for a No. 16 pick. We got two second-round picks [next year] for two third-rounds. That gives us some ammo next year. Maybe we can get somebody not to take one of our players and, in turn give them [picks] to try and have a little bit of protection to keep our team intact.”

Dames also left open the possibility for further moves before the 2017 season kicks off, saying, “We’re not done with the roster yet.”

This winter, Chicago has had eight players competing in Australia’s W-League, and the coach is doing his best to keep tabs on his young talent.

“I tune in when I can—some of their games are past my bedtime,” Dames joked.

“It will be a huge difference for us, having those guys all actually being [full-time] professionals and playing this year as opposed to not doing anything for six months.”

After making the playoffs for the first time in 2015 and repeating the feat in 2016, Dames also thinks this year’s squad is in good shape to make the finals in 2017.

“That loss stung everybody last year.”