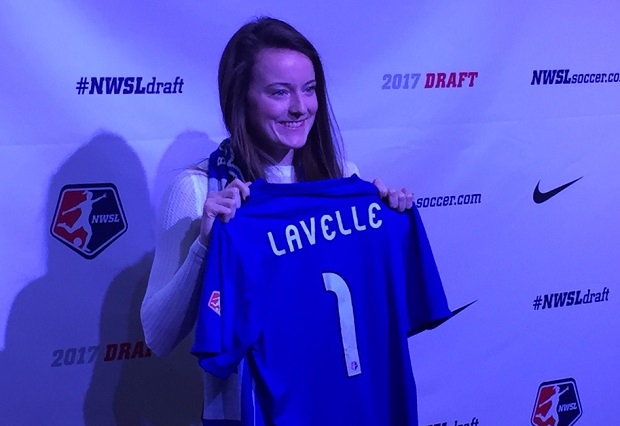 Rose Lavelle was selected by Boston Breakers as the No. 1 overall draft pick (photo by Dan Lauletta)

The pick comes as no surprise to most followers of the NWSL, as Lavelle was projected by many to be the top draft pick of 2017. As a true attacking midfielder, Lavelle’s skill on the ball and ability to move the ball down the field despite her smaller stature helped Wisconsin finish out 2016 with a trip to the second round of the NCAA tournament. That ability will be an asset to the Breakers, who struggled to generate goal-scoring plays for much of the 2016 season.

In her four-year career at Wisconsin, Lavelle played in 84 matches for the Badgers, scoring 22 goals and tallying 29 assists. She was also named the Big Ten Midfielder of the Year in both 2015 and 2016, the first player to receive consecutive honors, and was a three time All-American. She has also appeared on the MAC Hermann Trophy watch list multiple years, being named a semifinalist for the award in 2015.

Lavelle’s draft stock rose significantly after earning her first call up with the USWNT in December 2015. Since then she has participated in multiple USWNT training camps—she was also invited to the team’s training camp training camp that begins on January 13—despite not being capped with the senior national team. Lavelle has been on the USWNT’s radar for years as she also has extensive experience in the U.S. youth national team system.

Lavelle is the first player from Wisconsin to ever be drafted to the NWSL.