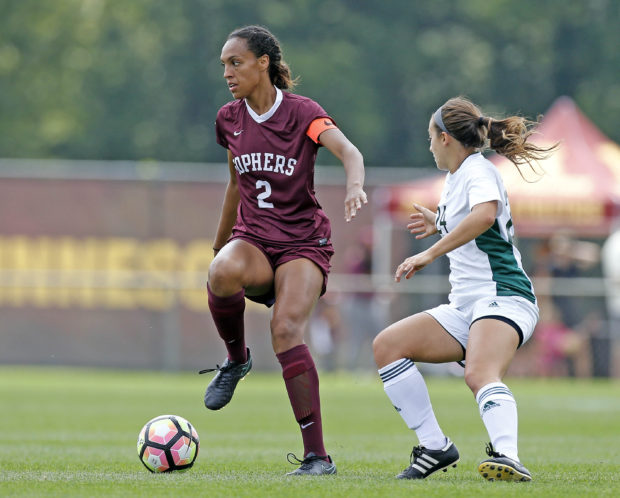 If there’s one takeaway from last summer, it’s that the name Simone is synonymous with excellence. At the Olympics in August, Simone Biles dazzled audiences in the gym literally performing feats that seemed to defy gravity while Simone Manuel made history in the pool.  Excellence and the name Simone also extends to the soccer pitch.

Simone Kolander, a 2017 NWSL draft hopeful, was named Big Ten Forward of the Year for the second straight season in October. The Minnesota native notched 11 goals and 6 assists en route to helping her team earn a share of the Big Ten regular season title.

And while her first name was linked to some of the best athletic performances of 2016, her last name in familiar to Gophers fans.  Her father Chad blocked a shot by Georgetown in the final moments to seal the men’s basketball team’s 62-61 win in the 1993 NIT championship game.

And while her mother was also involved in athletics at Minnesota as a member of the then women’s club soccer team, Simone says she felt no pressure to follow in her parents’ footsteps at Minnesota.

“They were super open. They would have been happy with whatever I chose which it just happened to work out that Minnesota was the school for me,” Kolander said in an October phone interview. “It helps having parents that are former athletes at such a high level that they understand where I’ve been and I think that’s what makes their feedback, their encouragement, and their criticism…that’s why I value it that much more. Not only do they care about me and they want the best for me but they’re knowledgeable as well.”

{THE LOWDOWN: Lauletta’s annual attempt to unlock the riddle of the NWSL Draft}

Given her tall frame, one would expect Kolander to excel at the aspects of the game typically associated with target forwards, and she does. Kolander, however, is much more than a player with a strong aerial presence. The forward is a more well-rounded player as evidenced by how comfortable she is with the ball at her feet.

Her ability to contribute to the Golden Gophers’ attack in a variety of ways may well be attributable to the fact that while growing up, Kolander typically played a little further back on the field. At Minnesota, she was asked to switch positions. She admits it was tough transiting to striker but feels the transition from club and high school soccer is difficult for everyone.

“The style of play I played was, I checked back to the ball a lot, liked to get the ball at my feet, like to like play it out wide, set other people up,” Kolander said about herself as a soccer player prior to her arrival at Minnesota. “ I was definitely more of a midfield minded player and so I had to change my mindset and I think that was one of the toughest parts.”

Each year the 2016 co-captain improved which she credits to her increased confidence. The extra training time she’s put into her shooting and finishing has  also helped. Kolander also credits the Golden Gopher coaching staff for putting her on the field early on and allowing her to build that confidence.

Her on the field skills weren’t the only thing that grew during her time as a Gopher. After her sophomore year, a lot of the team’s leadership core graduated and Kolander as well as other rising upperclassmen were required to take on leadership positions. In short order, she learned that a  key part of an effective leader is getting to know your teammates.

“I think you quickly learn that not everybody is going to respond the same way to the same message and I think that’s where getting to know your teammates personally is so important because even knowing which players you can just be like ‘Hey come on! Let’s go!’ and they’ll respond to that,” Kolander explained, “There are those players you take aside and really talk to them.”

Minnesota’s impressive season last fall earned them a national seed in the NCAA tournament. The Gophers hosted North Carolina State in the first round of the tournament.  Unfortunately for Kolander, the Wolfpack upset Minnesota on penalty kicks, ending a very promising season prematurely.

After graduating in December, Kolander hopes to apply what’s she’s learned to the next level. She got advice from her dad about her post-Minnesota plans. As a former athlete, her dad encouraged her to explore playing professional if it’s something she’s passionate about as the career path as a short shelf life.

“My dad who played basketball here, some of the advice he had given was that  your body is only going to be able to do this sport and compete in it for so long and if it’s something that you really, really love you should definitely chase your dreams to keep playing if that’s what you really want to do,” Kolander said adding, “If there’s a place for me in the professional game, I’d love to do that.

This Thursday could be a monumental step forward towards becoming a professional as Kolander looks to be one of the 40 women selected in the 2017 NWSL draft. The draft will be live streamed on the league’s youtube page.