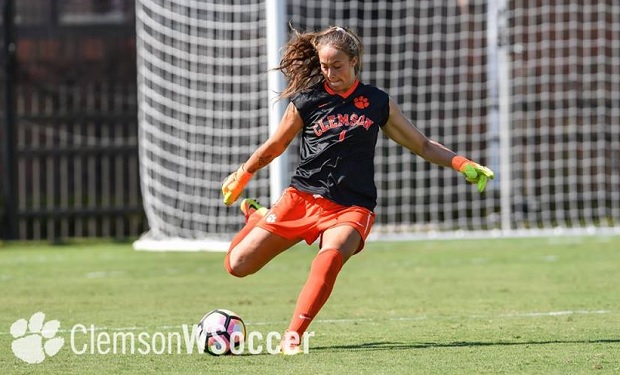 VANCOUVER, B.C – Canada’s pipeline of talented NWSL goalkeepers looks to continue with Kailen Sheridan. The 21 year-old Whitby, Ontario native, has entered the upcoming 2017 NWSL draft, and will hope to hear her name called on Thursday, January 12 in Los Angeles.

The Clemson Tigers psychology major completed her senior year with a 0.77 goals against average, .805 save percentage, and 66 saves in 21 games played. Sheridan has been a focal point of Clemson’s turnaround as a top college soccer program. Entering the NWSL draft fulfills part of a long-term goal that Sheridan has always dreamed of.

“I decided to enter the NWSL draft because it has been my dream since I was a little girl to play professional soccer at the highest level. Coming out of college the draft is a growing environment that I see having a massive future and impact in women’s soccer.”

In recent weeks, we’ve watched players like Ashley Lawrence, Kadeisha Buchanan, Alex Morgan, and Crystal Dunn sign to play in Féminine Division 1, or the FAWSL. While entering the NWSL draft is good first step to turning professional, Sheridan is keeping all of her options open, and hasn’t closed the door on playing in Europe.

“I have thought, and am still looking at potential European options of professional play,” admitted Sheridan. “However I entered the draft as well, and am keeping options open in Europe so I can make the best decision for my future when the time comes. I think that Europe has a well-developed system that the U.S. is trying to catch up to, however the NWSL has the potential to grow and surpass in the near future If the league continues to develop and progress the women’s game.”

NWSL teams like the Boston Breakers, Sky Blue FC, and Washington Spirit could benefit from drafting a young up and coming goalkeeper, like Sheridan. She’s focused on earning a roster spot and competing for that coveted number one keeper title. It won’t be easy, but having a keeper with a strong winning mentality is something any NWSL club could use.

“My NWSL goals start at earning a starting spot,” said Sheridan. “It’s important to me to get to a team that has an opportunity for me to compete for the #1 spot and not just join the team as the #2 or #3 and have no chance to challenge for the starting spot. However, following that I want to be able to lift that NWSL trophy whether we have to build to it in a couple of years or have a chance to make a strong run. Ultimately I want to win the NWSL.”

Taking that leap from the college game to the professional level can be quite a jump for some athletes. Sheridan has already been a part of a few Canada Soccer training camps. She made her senior national team debut with a clean-sheet, on March 7, 2016, in a 1-0 victory over Iceland at the Algarve Cup.

Leading up to the 2016 Rio Olympics, Sheridan was Canada’s backup keeper while Sabrina D’Angelo recovered from a fractured wrist. Sheridan was ultimately named to Canada’s alternate list. Being exposed to a national team environment has allowed her to be a sponge and pick up advice from players who have led the way and played in the NWSL.

“I have talked to a few Canadian teammates about advice and information upon entering the draft,” said Sheridan. “A lot of the feedback was to be patient but also be ready. It’s not every day that people get drafted, so if you do it’s a big moment. Also, if it’s not the team that you are hoping for or do not get an opportunity with, they have told me to be patient and work with the coaches and agents as well as the Canadian coaches to find the best solution. When your opportunity comes be ready to take advantage of it and make the best out of it. We can control how we play, so when you get the chance to play, it’s important we prove what we are capable of.”

Kailen Sheridan will be in attendance for the 2017 NWSL Draft and she should be the top goalkeeper that comes off the board first. When her name is called, it will be a special moment of hard work, happiness, and joy with her family and friends.