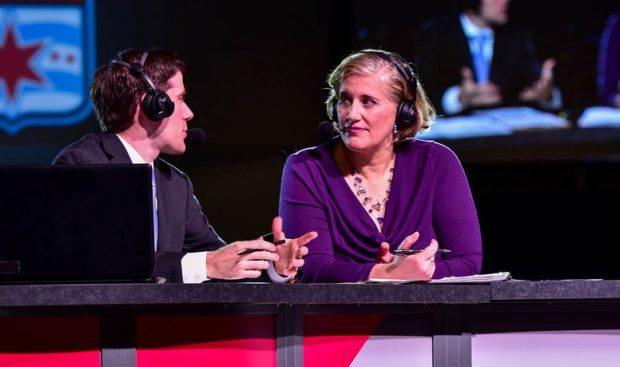 You may know Jen Cooper as the analyst for the Houston Dash or even one of two cohosts for last year’s NWSL College Draft. You may even know her as the founder of Keeper Notes, the host of The Mixxed Zone podcast or even the owner and operator of Soccer4All, a store specializing in soccer merchandise.

If you know of Jen cooper though, you know one thing is true: Cooper is an outright WoSo trivia buff.

It’s that reputation as a WoSo expert that has recently landed Cooper her second gig as analyst for the NWSL College Draft. This year she will sit alongside Mark Rogondino, Aly Wagner and Ashleigh Ignelzi and talk draft attendees and viewers at home through the draft.

While Wagner brings a unique player’s perspective to the webcast, Cooper brings with her extensive knowledge of the USWNT and the NWSL, as well as the two previous professional women’s soccer leagues, that she has been accumulating for the past several years.

So how did Cooper become the “encyclopedia of woso”? Although she grew up in a household that frequently played Trivial Pursuit, she says that it’s her love of soccer that inspires her to really research and soak up all of the WoSo trivia she can.

Although Cooper didn’t grow up playing soccer, she joined a recreation league team shortly after college graduation, but it was not until she watched the 1994 World Cup that she really fell in love with the game.

“I was mesmerized by it,” she said. “It was the first time I had seen high-quality soccer, especially Thomas Ravelli, the Swedish goalkeeper. I was like, ‘I want to be that. I want to be him.’”

Luckily for Cooper, her team’s goalkeeper had recently gone off to grad school, leaving an opening Cooper was all too happy to fill. She went from being the player who skipped every other game to the first one at practices. Eventually, she would even become president of the entire league, the Houston Women’s Soccer Association, a position she held for six years.

She also continued being a fan of the sport, keeping up with the United States women’s national team as well as the men’s team. She bought tickets to attend the 1999 Women’s World Cup, and she felt a connection to the players and the team that inspired her to get even more involved. Just a couple years later, she would be traveling all over the country to attend as many WUSA games as possible.

“I remember at the end of the end of 2001, I was looking at the [WUSA] website and it said, ‘Did you know your community could host a WUSA game?’” she recalled. “So I started investigating that, and it took about 10 months, but in October 2002, I hosted, through the Houston Women’s Soccer Association, we hosted the Washington Freedon versus Atlanta Beat….That was just so thrilling for me. It’s like Briana Scurry, Cindy Parlow, Mia Hamm, Siri Mullinax playing at the home field of my alma mater. That was, for me, the beginning of not only my soccer operations career, but also soccer promotions, writing and media.”

From the emails and information Cooper gathered in the planning and organizing of the WUSA game, she founded Keeper Notes, a newsletter to inform Houston residents of soccer happenings in and around the city. That eventually led to the creation of the Keeper Notes radio show in 2012.

It was also in 2012 that Cooper began archiving WoSo information, and all after a chance encounter with the U.S. Soccer media guide.

“My sister and I had met in Denver to see a double header. It was a preseason game between the Cyber Rays and the Freedom, followed by an MLS regular-season game for the Rapids and the San Jose Earthquakes…and they had a table of stuff that you could buy. I think it was auction stuff, but also you could tell they were just clearing out their closets,” she said. “I had never seen a media guide before with all of that date all in one place, like every single U.S. Soccer lineup ever and the player bios and all of that stuff. That’s when I started collecting those and seriously reading them, just absorbing those, watching those games over and over.”

That same year is when the USWNT won gold in the London Olympics, and a victory tour was no doubt in the works. Cooper used her contacts and experience organizing the WUSA match from a decade before to get the team to play a victory tour match in Houston that following December.

“What’s funny is my insane Excel database, it all started with that 2012 tour when I was just curious about how does the attendance for this tour compare to the one in 2008 and the one in 2004, so I started building this spreadsheet, putting in those games. Each time I would have a different question,” she said, “so then I eventually ended up entering every game that they’ve ever played, and then I’m entering who the coach was, and then I’m entering who scored, and then I started the database of every player who ever played.”

Over the years that database has grown to also incorporate the NWSL, and with it Cooper’s trivia knowledge has also grown. She has since published the NWSL Almanac, a one-stop resource for statistics and information regarding every player and match played in the previous four seasons of the NWSL, and she is currently writing another book compiling match reports and other useful information for every USWNT match that has ever been played.

Although she admits her expertise in the USWNT is stronger than that of the NWSL, she has all of the information readily available at the click of a mouse and a push of a button. That knowledge and resources have since made Cooper one of the most valuable assets in WoSo broadcasting and earned her the reputation of the WoSo encyclopedia. And while she may have been defeated by The Equalizer’s own Dan Lauletta in the WoSoCo Nerd Off before last October’s NWSL final, Lauletta better get ready. There will be a rematch, and Cooper will be back with a vengeance.