Carli Lloyd repeats as FIFA World Player of the Year 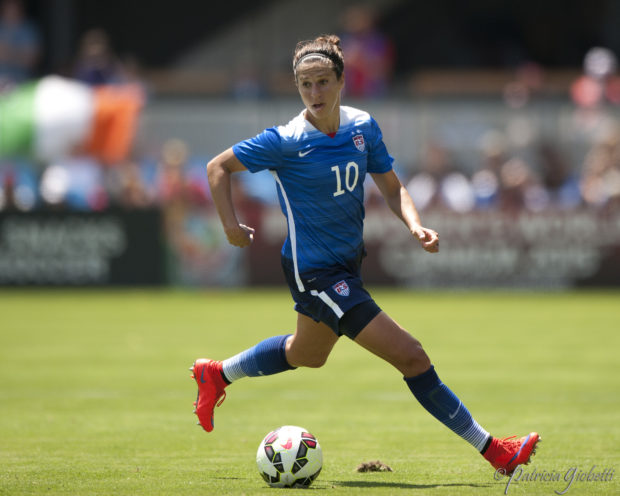 United States and Houston Dash midfielder Carli Lloyd was named the 2016 FIFA Women’s World Player of the Year on Monday at the Best FIFA Football Awards Gala in Zurich, Switzerland.

Lloyd wins this award for the second consecutive year, becoming the second-ever United States player to win this award twice in as many years, after Mia Hamm completed this feat in 2001 and 2002. Lloyd captained the United States women’s national team in the 2016 Rio Olympics this past summer where the team was knocked out to Sweden during the quarterfinal round. It was the team’s earliest exit from an Olympic tournament making it a disappointing result for the team who, one year earlier, won the 2015 FIFA World Cup title in Canada.

Lloyd, who looked a bit surprised herself to hear her name called out, praised her fellow nominees on stage before thanking her teammates and coaching staff. “I wouldn’t be standing up here without the help of my teammates. Thank you Jill and the coaching staff for believing in me,” she said on stage, “Thank you to my teammates. I play with some of the best players in the world, competitors – they push me every day.”

Towards the end of the acceptance speech, Lloyd looked ahead to what’s to come. “Now here’s to 2017. Gotta start prepping for 2019 World Cup qualifying.”

In April, Lloyd suffered a knee injury in a Houston Dash game that at the time, many worried may have put her Olympic hopes in jeopardy. After taking 2 months off, she returned to USWNT action ahead of the July 9th friendly, just one month prior to the start of the Olympic Games.

Lloyd’s Houston Dash missed the playoffs for the second consecutive year as they finished the year with 22 points, two spots clear of the bottom of the NWSL table.

Lloyd beat out Brazil forward Marta, who has won the award five times and German midfielder Melanie Behringer- the top scorer at the Rio Olympics- for the award.

“I’d like to seize this opportunity to thank the team and the team behind the team”, she said on stage “for 34 years working for the women’s national side and all of those incredible moments I was able to achieve.” The 2016 final in Rio was her last game as national team coach and she will embark on a new journey in a new role as head scout for the women’s department for the German Federation.