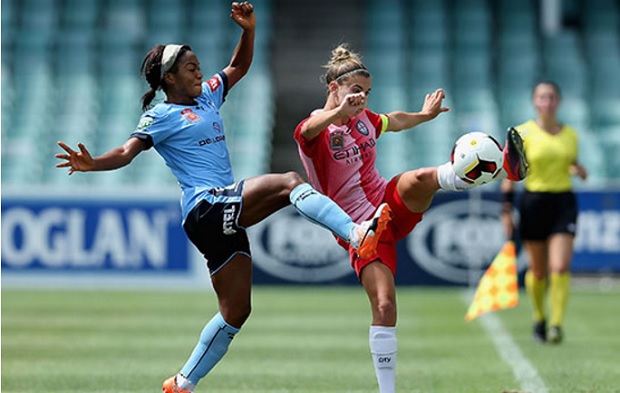 Francisca Ordega and Steph Catley battle for the ball in this weekend’s rematch of the 2016 Grand Final. (photo courtesy Sydney FC)

The long awaited rematch of last year’s Grand Final between leaders Sydney FC and reigning champions Melbourne City—who are winless in their last four matches—ended in a 1-1 tie on Sunday, January 8. With the point, Sydney retained first place thanks to Caitlin Foord’s (ex-Sky Blue FC) 67th minute goal, her second of the year. City answered the goal eight minutes later from Jess Fishlock (Seattle Reign). Sydney FC is now two points clear of Perth, who won their game versus Melbourne Victory, while City are winless in five consecutive matches but has recorded ties in their last two games and remains in fourth place.

Perth Glory defeated Melbourne Victory 3-2 on Sunday, January 8 to extend their undefeated streak to six matches. Strangely, Perth scored all of the goals, with second-half goals from Sky Blue FC’s Sam Kerr (her league-leading ninth of the season), Chicago Red Stars loanee Vanessa DiBernardo from the penalty spot (her third goal) and Rosie Sutton (her fifth of the season). Perth also scored two second-half own goals by Mexican international Arianna Romero (ex-Houston Dash) and Nikki Stanton (Sky Blue FC). With the win and Sydney’s tie against Melbourne City, second place Perth reduced the gap with first place Sydney FC to two points from four and the Western Australian side has a game in hand.

Brisbane Roar used a Tameka Butt hat-trick to defeat the Western Sydney Wanderers on January 7. Both sides started the round three points behind fourth-place Melbourne City. Butt had two goals within the first six minutes and the third on the 75th-minute mark. The Sweden-based player, who played for the Boston Breakers in the WPSL Elite in 2012, now has five goals on the season. In addition, former Portland Thorns defender Clare Polkinghorne became the first player in league history to play in her 100th W-League game, all with the Roar. The game attracted 2,503 to Suncorp Stadium, ahead of the men’s game versus Newcastle Jets, where 14,470 saw the home side lose 3-2.

On Saturday, January 7, an Ashleigh Sykes brace gave Canberra a share of the points at home with draw specialists Adelaide United, who are still winless this season but have five draws in nine games, two more than any other team in the league. Sykes now has six goals on the year. Sofia Huerta (Chicago Red Stars) replied with a brace of her own—one goal from the penalty spot—and now has four goals down under.

For Canberra NWSL loanees Hayley Raso and Celeste Boureille (both Portland Thorns) started and played 90 minutes, while Canberra striker Jasmyne Spencer (Orlando Pride) played 80 minutes and Stephanie Ochs (Houston Dash) played 87 minutes. Former Australian U-17 and U-20 international Kahlia Hogg substituted in for Ochs for the final minutes. Hogg joined Canberra after a five-year gap, having played in the United States for Florida State University and the University of Colorado. Her father Steve, an Australian-international defender, played for NSL (A-League predecessor) sides in Brisbane and Canberra. Former Western New York Flash striker Michelle Heyman is out for approximately a month with an ankle injury. Australian international defender Ellie Brush did not play as she was resting a knee injury. Brush plans to play in the first season of the eight-team Australian Football League’s women’s professional division, leveraging some of the men’s organizations, which launches next month after a few seasons of exhibition matches.

For Adelaide United, NWSL loanees Danielle Colaprico, Sofia Huerta and Katie Naughton (all three from Chicago Red Stars) played the entire match, while Monica of Brazil (Orlando Pride) was out this week to rest a hamstring.

Newcastle Jets had the bye this round.