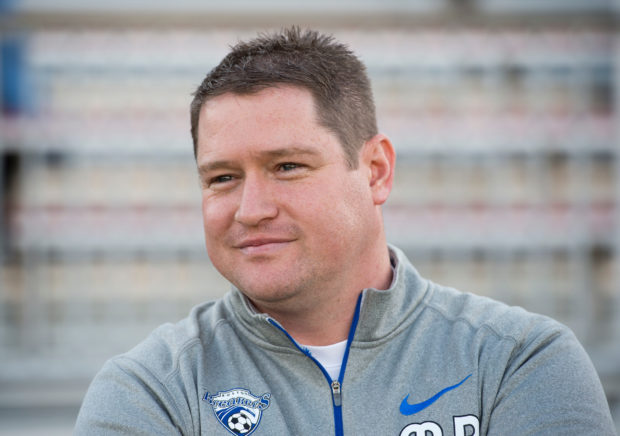 Head Coach Matt Beard admits that next week’s NWSL College Draft will define the direction his club goes in the future, with the Boston Breakers holding four first-round picks and seven in total.

The Breakers have been without question the busiest club in the league off-season, overhauling the roster that saw them finish bottom of the league in 2016, and bringing in a number of players familiar to Beard from his time in England. But the draft next week presents a solid opportunity for the Breakers to lay the foundations for the next few years, with five of the first 11 picks belonging to the East Coast club, as well as picks 31 and 38.

With a strong draft class this year, the opportunity to stop the rot for the Breakers has never been greater, and Beard admits he looks at what the Western New York Flash were able to achieve in 2015 as he looks to shape his squad.

“Western New York is your best example two years ago of a team that used the draft really well, going onto win a national championship a year later,” he said. “I’ve identified some really good players in the top ten, top 20, even top 30, there’s some real talent available, so we need to get it right.”

Preparation for this year’s draft in Los Angeles could not be any different to that of last year, with Beard only taking on the Boston job two months before the Baltimore event was due to take place. With having to organize a visa, somewhere to live, and moving his family over, he admits that he wasn’t ideally prepared for what was ahead of him.

“I knew last year was going to be tough, I was under no illusions and it was tougher than I had anticipated,” he confessed. “It was really out of my hands and I had to trust the people who were already at the club. We were very relaxed about everything, but then we acquired the number three pick, so it added a bit of pressure.”

Beard learned a lot from last year’s draft, and much more in 2016, following the college game in his first full year in the United States.

Concepts such as roll on, roll off subs, which is fairly unique to the college system, and the number of games played in such short periods of time, were all things the English coach needed to get his head around when scouting players. But watching these young players and selecting the right ones, are two different tasks. First round picks in particular are often expected to hit the ground running immediately, and Boston has four of them.

So what does a coach look for when deciding whom to acquire for their club? Do they go for the player with the highest stock, like Emily Sonnett last year, an international that simply couldn’t be passed up? Or, do you go for the players in the positions you have identified as a priority?

Beard admits it can be difficult.

“It’s a bit of both to be honest with you. In terms of this year, I will identify the best players available who can come to Boston and play the way I like to play.

“This might not necessarily mean that I’m going for the players that maybe others have identified. I want to get the best players available who can come in and compete and create competition for places – which is something we didn’t have last year.”

Ensuring the right players are acquired, doesn’t just center on watching film and attending games, but for Beard, also involves doing research on the players themselves to ensure they fit in with his ethos and bring the right character.

It won’t have gone unnoticed that the former Liverpool coach’s overhaul of his roster has seen him bring in players that he has worked with before. But not only that, players he trusts, who will fight for the cause and who have the right mentality.

But with so many players, from so many universities, spread out across one of the largest countries in the world, how do you even begin to gain that insight on the players that are of interest?

“Its tough, but you watch as many games as you can, and you speak to the player’s coach who works with them every day. In the whole of my recruitment process, I have always wanted to get to know the players, get to know what makes them tick, and absorb as much information about them as possible.”

Getting to know the character of players he’d like to bring in could be key for Beard as those who sign on with the Breakers will be coming into an environment where the L column has been far greater than the W in the last three seasons.

In terms of bringing in those players to turn things around, read the statement aloud to the Breakers coach, “With the first pick of the 2017 NWSL College Draft, the Boston Breakers selects…,” is he in a position to fill the gap?

“Yes, I know whom I want at one, but I’m not telling you,” he chuckles.

“I know who I want at three, at eight and at nine, and if a player goes before it comes to us, then we cross them off and look at our list. There are plenty of top players in this draft, and I know exactly who I want from it.”