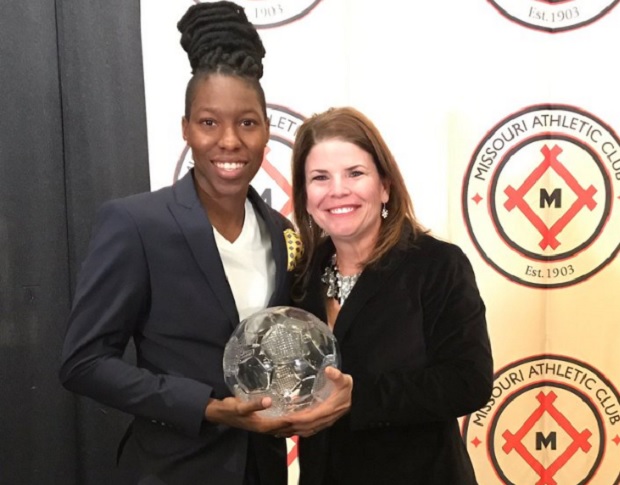 West Virginia University and Canadian-international defender Kadeisha Buchanan won the 2016 Missouri Athletic Club (MAC) Hermann Trophy. The MAC Hermann trophy is the award given out to the best collegiate player in the country. Buchanan beat out Morgan Andrews (USC) and Andi Sullivan (Stanford) to win this year’s award and is only the second defender to ever win the award.

Over the past four years, Buchanan has been a standout player for WVU. Her assertiveness, daring and tenacity on the ball is unparalleled by most in the NCAA. As a two-time captain, Buchanan helped lead the Mountaineers to their first ever NCAA College Cup final this past December, where they ultimately fell to fellow finalist Andrews and USC.

Leading into that match, Buchanan was a contributing force in earning a program record 18 shutouts this fall while allowing only 12 goals in 27 matches. As a dual threat who is just as effective in the attack as she is on defense, Buchanan tallied three goals and three assists on the season, increasing her career total to eight goals, nine assists and 25 total points. For these accomplishments, Buchanan also won the 2016 Honda Award, named espnW’s female soccer player of the year.

Although it was her collegiate play that earned Buchanan the Hermann trophy, she also achieved notoriety at the international level this past year when she won an Olympic bronze medal with the Canadian women’s national team. For Canada Buchanan has 59 starts over 63 appearances, three goals and two assists.

Because of her excellent play this year for WVU, many American fans hoped to see her declared for the 2017 NWSL College Draft, but rumors have put her signing with a team overseas instead. As of Friday, January 7, Buchanan had not declared for the draft, although the deadline is not until January 11.