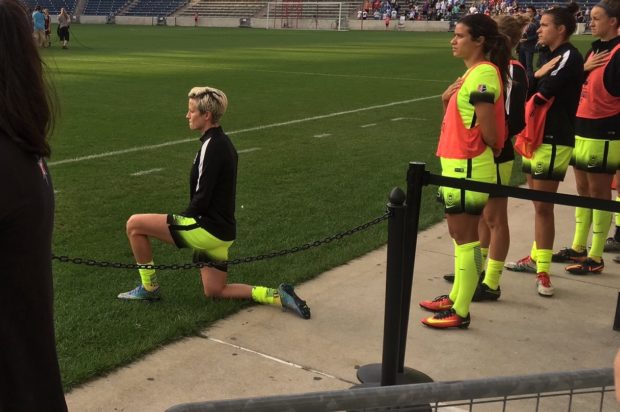 Megan Rapinoe kneeling during the National Anthem of Reign’s September 4 match in Chicago.

When the Seattle Reign traveled to Chicago in early September to take on the Red Stars, no one would have expected the main story to be one that occurred before the contest even kicked off. After all, both squads entered the match in the thick of the NWSL playoff hunt, separated by only three points with four games left to play in the regular season.

However, the events that occurred that Sunday night at Toyota Park ended up shaping a national debate over the coming weeks and months.

Still not 100% fit after the Olympics, Reign midfielder Megan Rapinoe didn’t start the game in Chicago, but still managed to make quite the statement, kneeling on the sideline near Seattle’s bench during the national anthem.

After the contest, Rapinoe told American Soccer Now that her protest was done to support San Francisco 49ers’ quarterback Colin Kaepernick, who had begun kneeling prior to NFL games just a few weeks earlier—an act Kaepernick said he performed to protest racial injustice in the wake of a series of African-American deaths at the hands of police officers.

“It was a little nod to Kaepernick and everything that he’s standing for right now,” said Rapinoe. “I think it’s actually pretty disgusting the way he was treated and the way that a lot of the media has covered it and made it about something that it absolutely isn’t…Being a gay American, I know what it means to look at the flag and not have it protect all of your liberties. It was something small that I could do and something that I plan to keep doing in the future and hopefully spark some meaningful conversation around it.”

Rapinoe’s actions that night set off a wave of debate that only grew in intensity midweek when Seattle traveled to Washington. Prior to that match, Spirit owner Bill Lynch, a veteran of the United States Air Force, opted to play the national anthem while both teams were still in the locker room in order to prevent Rapinoe from kneeling again.

The team also immediately released a statement which described Rapinoe’s protest as an act of “disrespect” and an attempt to “hijack” the event, a comment that some dubbed in poor taste considering the proximity of the game to the 9/11 anniversary only four days away. Rapinoe herself didn’t hold back after the match, calling the Spirit’s decision “f***ing unbelievable” and accusing Lynch of homophobia.

That weekend, on September 11, the Reign played at home and, this time, Rapinoe chose to stand for the national anthem, locked arm-in-arm with her teammates prior to a match that also honored several Navy veterans in attendance.

However, Rapinoe standing on September 11 didn’t end the saga. Four days later, she would kneel again, this time in a United States women’s national team jersey prior to a friendly against Thailand played in Columbus, Ohio.

That action led U.S. Soccer to release their thoughts on the matter, saying, “Our national anthem is an opportunity for our men’s and women’s national team players and coaches to reflect upon the liberties and freedom we all appreciate in this country. As part of the privilege to represent your country, we have an expectation that our players and coaches will stand and honor our flag while the National Anthem is played.”

{XI WoSo Moments of 2016: Love wins in aftermath of tragic shooting at Pulse}

Head coach Jill Ellis also added her reservations about the protest, worried that Rapinoe’s individual action overshadowed the focus on the team.

However, despite the statements from the federation and Ellis, Rapinoe again elected to kneel four days later in Atlanta when the U.S. played the Netherlands.

From there, the controversy largely fizzled out. While Rapinoe did kneel again for Seattle’s final club game in Houston a week later, she wouldn’t come to represent the U.S. again in 2016. In October, Ellis chose not to include the winger for a series of friendlies against Switzerland; in November, Rapinoe received a call-up, but didn’t dress for either of two California friendlies against Romania—admitting before the first contest that she still wasn’t fully fit.

{More WoSo Moments of 2016: Link to all XI of our top WoSo moments of the year}

During the November camp, U.S. Soccer President Sunil Gulati added his thoughts to the matter, telling FourFourTwo during a roundtable discussion, “There is a right to freedom of speech. She also has the obligations to putting on a national team uniform. And we think those are pretty strong when you’re representing the U.S. national team and wearing the crest.”

Where the controversy goes next is anyone’s guess. Throughout her career, Rapinoe has shown a willingness to speak out on controversial issues and her anthem protest this year was certainly no different, especially in the face of considerable pressure from both the public and U.S. Soccer. The only for certain is that when Rapinoe lines up for her first match in 2017, all eyes will be on her during the Star Spangled Banner.