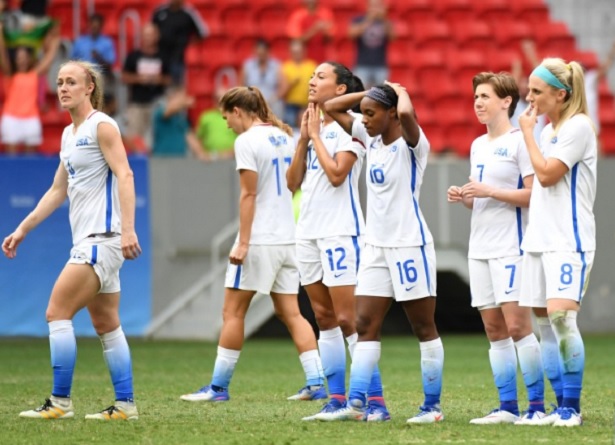 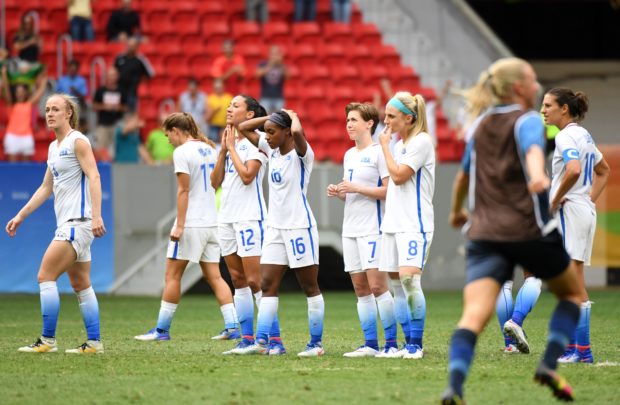 The USWNT is out of a major tournament at the quarterfinal stage for the first time ever. (Christopher Hanewinckel-USA TODAY Sports)

After the United States women’s national team’s stunning run to become the 2015 World Cup champions, many fans around the world thought the USWNT was poised to be the first team to win a World Cup and Olympic gold in consecutive years. After all, the USWNT had won gold in the previous three Olympic tournaments.

However, not only did the USWNT fail to win Olympic gold in Rio, but they failed to even medal, being eliminated by Sweden in penalty kicks in the quarterfinal round. It was the earliest exit ever by the USWNT in a major world tournament.

Previously, the worst result for the USWNT in a major tournament was third place, where the USWNT finished in each of the 1995, 2003 and 2007 World Cups. The worst Olympic finish for the team was silver, which the team earned in the 2000 Olympics after falling 3-2 to Norway in the gold-medal match. Because of the team’s prior Olympic history though, even fans who were skeptical of the USWNT winning gold thought the team would at least return to the medal podium for the second time in just over a year.

The team seemed well on their way to do just that, opening their Olympic tournament with a strong showing against New Zealand. The USWNT played some of their best soccer all year, looking much more cohesive than in any of their previous matches. Carli Lloyd scored the game-winning goal in just the ninth minute, while Alex Morgan scored an insurance goal in the first minute of the second half to defeat the Football Ferns, 2-0.

However, the second match of the group stage did not go as smoothly for the USWNT. France was a much stronger opponent than New Zealand, and the U.S. suffered some of the same problems that had plagued them for much of the year. While the U.S. had trouble connecting passes and maintaining possession of the ball, France seamlessly controlled the ball in their own offensive half for much of the match. France also outshot the U.S. 14-7, but Hope Solo made five big saves to preserve the shut out. Lloyd also came through with the game-winning goal in the 62nd minute to once again win the game and put the U.S. at the top of their group.

Group play ended with the USWNT facing Colombia, who on paper should have been the easiest opponent the U.S. faced but turned out to be the most difficult. Unlike in the previous match against France, Solo seemed off her game and made a number of goalkeeping errors, allowing two shots by Catalina Usme to slip by. Luckily for Solo, Mallory Pugh and Crystal Dunn each scored a goal, ending the match in a 2-2 draw and progressing the USWNT into the elimination stage, where they would take on Sweden.

Sweden proved to be a dauntless opponent for the USWNT, and the U.S. attack was unable to penetrate the bunker-style defense implemented by former USWNT coach Pia Sundhage’s side. The match remained scoreless throughout the first half, but goals by Sweden’s Stina Blackstenius and Alex Morgan saw the match tied 1-1 at the end of regulation. Two goals negated by the offside flag and a lack of finishing by the USWNT saw the match still tied at the end of extra time, and the game was sent to a penalty kick shootout. Both Morgan and Christen Press failed to convert, while only Linda Sembrant failed to convert for Sweden. Sweden outshot the U.S. 4-3 in the shootout, sending them to the Olympic semifinal round and sending the USWNT home early.

Although the result counted as a tie and the USWNT would finish 2016 technically undefeated, the failure to medal in an Olympic Games undoubtedly felt like one of the most painful losses the USWNT and its fans have ever suffered.