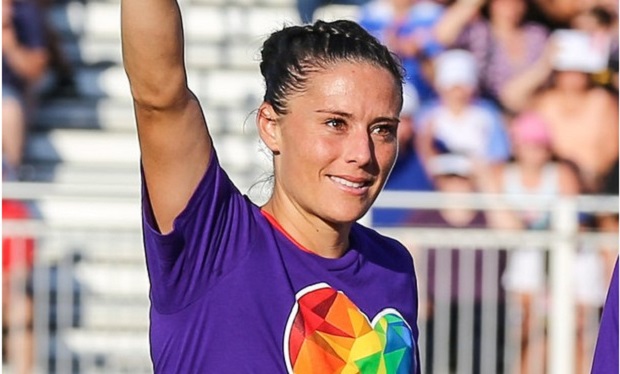 Ali Krieger, then with the Washington Spirit, wears tee-shirts honoring victims of the nightclub shooting at Pulse in Orlando. (photo copyright EriMac Photo for The Equalizer)

There are many reasons we love soccer: the perfect first touch to settle the ball, the absurd athleticism that taps a shot over the cross-bar, the trade off of a goal celebration for a yellow card.

One of the reasons we love soccer is because it is a community. There are supporters clubs, bars, banter, and songs in addition to fans of almost every age, creed, or identity.

On Sunday June 12, 2016 the largest mass shooting in U.S. history targeted the gay community at Orlando nightclub Pulse. The initial response to the news could be likened to getting the wind knocked out of us: there was confusion and pain, there was a doubling over of emotion, and for a moment we all felt alone in our grief.

But as the shock of the news spread outward, hope, love, and unity began to echo back from our NWSL and WoSo community. Refreshing Instagram and Twitter posts brought in a trickle, and then a torrent of messages from players, teams, journalists, supporter clubs, trainers, soccer blogs, and coaches speaking out against hate.

Never forget who you are and what you represent. #OrlandoUnited #LoveWins pic.twitter.com/rBGGSWJkOe

Orlando United T-shirts were created to show unity in the week that followed. The Orlando Pride match on June 18 in Washington against the Spirit underscored the sentiment of community. Standing in matching Orlando United shirts, both teams honored the victims and families prior to the start of the match. We were also told that at minute 49 of the game the stadium and players would observe a moment of respect for the victims.

As the clock ran towards that moment those of us in the press box, watching on YouTube, and following on Twitter prepared to face this tragedy together. We watched the Pride tap the ball back to the feet of keeper and Orlando-native Ashlyn Harris. The entire stadium of 5,750 paid respects to those lost and affected. The applause continued and got even louder as Harris slowly pushed the ball to the top of the box to put it back into play, affirming that there is only room for one perspective in our community: love is love.

The beauty of the Beautiful Game in this context is not an incredible back heel or screaming golazo;the beauty is derived from the love put into the sport and the community that is generated out of that commitment. Harris would echo this sentiment after the game: “The beauty of this game is that it brings people together that’s why we do what we do.” There are many reasons we love soccer, but regardless of reason or role, we do it together.