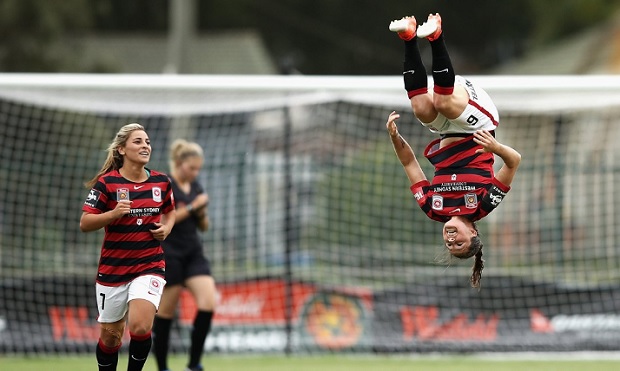 Kendall Fletcher (Seattle Reign) scored twice—the second from the penalty spot in the 49th minute—to give Western Sydney Wanderers a home victory over Melbourne City in front of 513 fans on December 18. Former Australian youth international forward Marianna Tabain scored in the 3rd minute (her second of the season) to give City the lead, but they went on to lose their second consecutive game of the season and in their history, having gone undefeated last season as an expansion side. City fell to a tie for third in the standings with idle Sydney FC, both a point behind Canberra and Perth Glory.

Canberra United blasted Brisbane Roar 5-1 at home on December 18, led by Nickoletta Flannery and Ashleigh Sykes each scoring a brace. The 17-year-old Flannery, an Australian U-20 international, now has three goals on the season. Australian international Sykes was a member of the 2015 Women’s World Cup team in Canada and an original Canberra United player in the inaugural season of 2008/09; she spent this past offseason with AS Harima Albion in Japan’s second tier. Sykes also has scored three times this season. American loanee Stephanie Ochs (Houston Dash) scored the other Canberra goal, her second of the season. Australian international Emily Gielnik, who has played for Liverpool, Ottawa Fury and Urawa Red Diamonds in Japan, scored in injury time to spoil the shutout for Canberra’s goalkeeper Trudy Burke. With the victory and other results on the weekend, Canberra heads the table with 13 points along with Perth Glory, though Canberra has a slightly better goal difference (+8 vs. +7).

Newcastle Jets tied Melbourne Victory 1-1 on December 16 in Newcastle. Boston Breakers loanee and English international Natasha Dowie scored early for the visitors (18th minute), while Chicago Red Star loanee Jen Hoy replied for the Jets with six minutes remaining in the game. Dowie and Hoy both scored their fourth goals of the season. For Newcastle’s NWSL contingent, Katelyn Rowland (Western New York Flash) in goal, Megan Oyster (Boston Breakers), Arin Gilliland (Chicago Red Stars) and Hoy all played 90 minutes. For Melbourne Victory, Samantha Johnson (Chicago Red Stars), Christine Nairn (Seattle Reign) and Dowie played the entire match. Goalkeeper Bianca Henninger (Houston Dash) did not play as she is recovering from a knee injury over the next 4-6 weeks. The tie hampered both teams’ quest for the playoffs, with Newcastle still within a couple of victories of making the playoff frame; Jets have 7 points and sit in sixth place as Melbourne City and Sydney FC stand tied for third on 12 points. Melbourne Victory is second from the bottom with 3 points.

For Perth, Kerr now leads the league in scoring with 5 goals, with half of the rounds completed for the season. Rosie Sutton, who played for a year in Iceland and then scored 5 goals last season for Adelaide, has returned to Perth this year to great effect and now has three goals on the season, while DiBernardo has two. Alyssa Mautz (Chicago Red Stars), Nikki Stanton (Sky Blue FC), Mexican international defender Arianna Romero (ex-Houston Dash), DiBernardo and Kerr all started the match for the Glory. Stanton subbed out in injury time at the end of the second half, while the others played the entire match.

The three points allowed the Glory to jump to a tie for first with Canberra on 13 points, while Adelaide is marooned at the bottom of the table on 2 points.

Sydney FC had a bye this week.