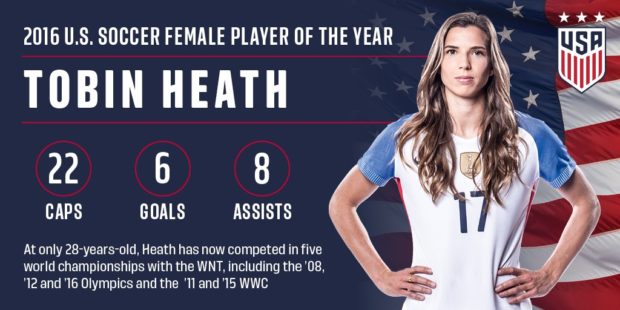 Tobin Heath is the 2016 US Soccer Female Player of the Year (photo credit: U.S. Soccer)

Tobin Heath has been voted U.S. Soccer Female Player of the Year for 2016. The announcement was made Tuesday on ESPN’s soccer program ESPNFC. Also honored was 17-year old Ashley Sanchez who was voted Young Female Player of the Year. Heath won with 40 percent of the vote, edging Crystal Dunn who collected 34 percent. The other finalists were Carli Lloyd, Alex Morgan, and Becky Sauerbrunn.

“It’s obviously an honor to win an award like this, especially when you look at the list of amazing players who have won it before,” Heath said via U.S. Soccer. “This year was a difficult one for our team, but overall we played some great soccer so it’s humbling to be recognized individually. I’m just proud to be in the company of all the great players that were nominated and all of the players that played for the USA this year. I couldn’t have accomplished anything without the support of my teammates and my coaches, and while it was a fun year for me personally, I’m excited not only about my own future, but also the future of this team as I know we have a lot more room to grow and many more goals to achieve.”

Heath won the Young Female Player of the Year in 2009 and on Tuesday joined Lauren Cheney/Holiday as the only players to win both awards. The Young Female award was first awarded in 1998. Heath appeared in 22 matches for the United States this year scoring six goals with eight assists. On the club level she set the NWSL record for assists with 10 despite making only 14 appearances. She was named to the league’s postseason Best XI.

Sanchez played in both youth World Cups in 2016. She captained the U-17 squad in Jordan and scored three goals in three games. Later she was the youngest player on the U-20 team. Sanchez started all six games of that tournament and had a goal plus two assists. The United States was not on the podium in either event.

“It was a memorable year for sure, and even though we fell short at both World Cups, I know the experiences that me and my teammates had will last a lifetime,” Sanchez said.

Sanchez is verbally committed to attend UCLA beginning next fall. She is expected to be teammates there with 2015 winner Mallory Pugh. Players are not eligible to win the Young Female Player of the Year honor in consecutive years.

Huw Williams left his mark on FC Kansas City, NWSL
Heath to ESPN: “I am very happy here in the U.S.”