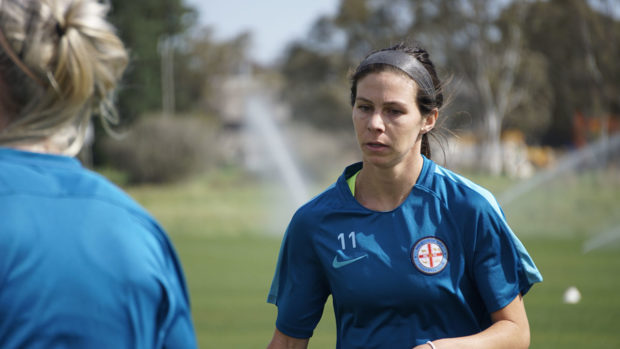 Melbourne City burst onto the scene last season and won all 12 regular season matches. They were held to a draw by Brisbane in the semifinals before defeating Syndey FC Women in the Grand Finale. Saturday marked the club’s first dropped points and first defeat of any kind though they remain atop the ladder on goal difference from Syndey who also lost. Melbourne also own a match in hand on Sydney.

Samantha Kerr (Sky Blue FC)’s 18th minute rocket held up as the only goal at Dorrien Gardens as the hosts denied Sydney a chance to supplant Melbourne at the top of the ladder. Alyssa Mautz (Chicago Red Stars), Nikki Stanton (Sky Blue), and Vanessa DiBernardo (Red Stars) all went the full 90 for Perth as did Kerr. Perth moved within two points of first place with the win.

Melbourne carried the lead into stoppage time but were denied their first victory of the season by Katie Stengel (Washington Spirit)’s 91st minute equalizer. Kariah White had put the hosts on top at 84 minutes. The Wanders had already rallied after keeper Jada Mathyssen-Whyman’s 2nd minute own goal and eventually tied it up the first time when Sarah Yatim converted in the 61st, just five minutes after vacating the substitutes’ bench.

The point was Melbourne Victory’s second of the season but they remain last of nine clubs on the ladder. Western Sydney are two places up on four points.

Brisbane opened up a 3-0 lead and held on for dear life to eke out the win and keep Adelaide out the win column on the season. The Roar led by two goals after 11 minutes thanks to Katrina Gorry and Tameka Butt and carried that lead into the half. Allira Toby came on after the break and scored four minutes in to make the lead appear insurmountable.

Adelaide staged a rally though, getting o the board through Adriana Jones and narrowing the lead to one on Sofia Huerta (Chicago Red Stars)’s 74th minute penalty. But they were unable to find an equalizer. For Brisbane, Gorry was replaced later after apparently picking up an injury in second half stoppage time.