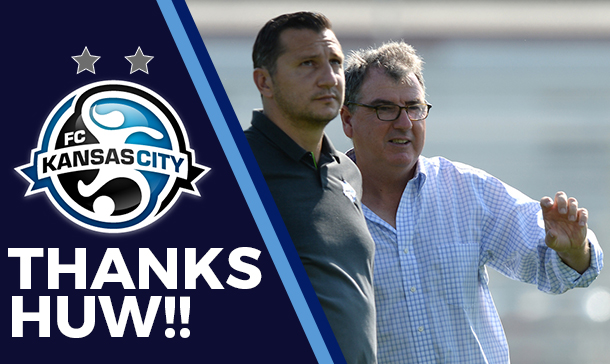 FC Kansas City general manager and assistant coach Huw Williams resigned from the club on Thursday. Williams assisted Vlatko Andonovski during the Blues’ inaugural season in 2013. He was promoted to general manager during the championship season of 2014. A native of Wales, Williams has been a Kansas City fixture since 1985 and owns the sports marketing and event company Global Sports International (GSI). It is GSI where Williams’s focus will go following four seasons with FC Kansas City and the Missouri Comets.

“I’ve loved being a part of this venture since the beginning,” Williams said of FC Kansas City in a team release. “I wish nothing but the best for Vlatko and the team and the NWSL. I have learned so much and made many lifelong friends in the past four years. I will miss being here every day, but I will be a Blues fan for life.”

Williams and Andonovski made a dynamic team and combined on developing the trail blazing style in NWSL that saw the club become the only one to qualify for the playoffs each of the first three seasons. The 2014 and 2015 seasons ended in championships. Williams also collaborated with Andonovski on a draft strategy that has seen FC Kansas City parlay several deep picks into quality players. Second round pick Erika Tymrak (11th overall) was 2013 NWSL Rookie of the Year. The 2014 rookie class included Kassey Kallman (No. 5) and Jenna Richmond (No. 16). Both became regular starters on the 2014 championship side and Kallman was later used in a package to acquire Heather O’Reilly. In 2015, Shea Groom (No. 12) was a Rookie of the Year candidate before missing time with a broken foot.

“There are not words that can explain how thankful I am for everything that Huw did for this organization, team and especially for me personally,” Andonovski said. “He has been my mentor from day one and helped me grow as a coach throughout these four years. I’m sad that decided to go, but at the same time I’m happy for him and his new opportunity.”

The club has recently come under the microscope thanks to an internal lawsuit among owners. The club is also said to be for sale.