US Soccer reveals Player of the Year nominees 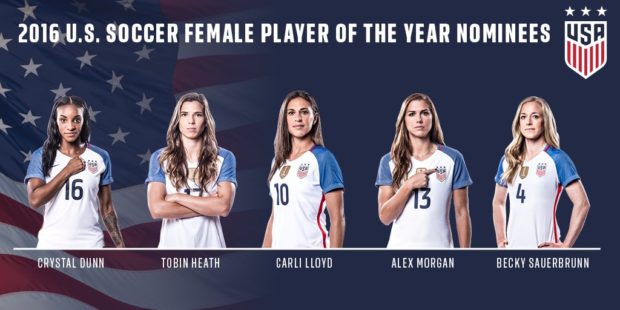 The nominees for 2016 U.S. Soccer Female Athlete of the Year (photo: U.S. Soccer)

FIFA World Player of the Year finalist Carli Lloyd was among five nominees named Monday by U.S. Soccer for the Female Player of the Year award. Lloyd has already won the award twice including last year. She also took down the honor in 2008. The only other former winner nominated was Alex Morgan who won for her 20-goal, 20-assist season of 2012. The other nominees are Crystal Dunn, Tobin Heath, and Becky Sauerbrunn.

Lloyd and Morgan scored 17 goals between them and combined for three hat tricks. Morgan scored key goals in two of the SheBelieves Cup matches and two more in the Olympics including the equalizer against Sweden. Lloyd scored in the first two Olympic matches.

Dunn tied a team record in February when she buried five goals against Puerto Rico during Olympic qualifying. She scored 14 goals in all including one against Colombia in group play in Rio.

Heath excelled as a creative midfield player and continued to send in deadly free kicks on a regular basis. Sauerbrunn continued as the defensive anchor.

The five nominees for Young Female Player of the Year are: Emily Ogle, Kaleigh Riehl, Karina Rodriguez, Ashley Sanchez, and Andi Sullivan. Last year’s winner Mallory Pugh, who spent much of the year with the full national team, is not eligible to win the award two years in a row.

The winners will be announced Sunday, December 11 on ESPN FC.