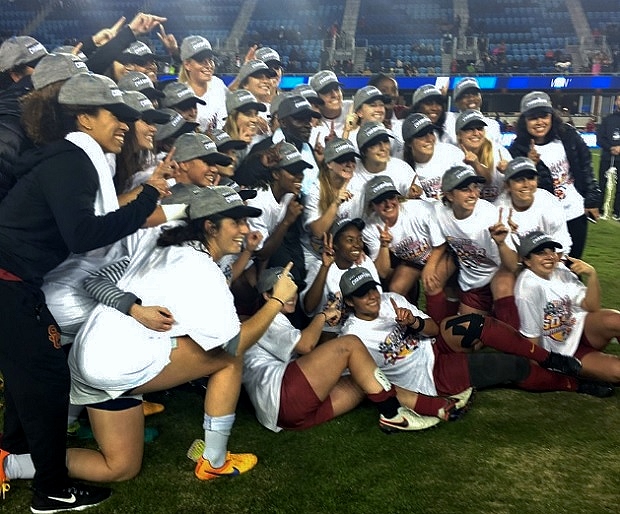 As has happened more than once this tournament, the College Cup final ended in an upset as the USC Trojans defeated the WVU Mountaineers 3-1 to claim the 2016 NCAA Championship. Both teams made history in the process, with WVU making their first College Cup appearance, as well as the first for any Big 12 team, while USC is the only other team besides UNC to go two-for-two in College Cup final appearances after winning their first championship in 2007. So what happened?

The old adage proved true once again. WVU held the majority of the possession and greatly exceeded USC in shots, 21-8, but while the Trojan defense held strong, defensive slips by the Mountaineers allowed all three goals. Morgan Andrews’ header for the opening goal in the very first minutes of the game occurred because WVU first failed to properly clear the ball and then were caught ball-watching. Both Savannah Levin, who headed the ball back into the box, and Andrews were left unmarked, and Andrews was able to send it past goalkeeper Rylee Foster.

In the second half, Leah Pruitt ran down a long ball and took on first one, then both Mountaineer centerbacks before slotting the ball to Katie Johnson, who sent Foster diving in the wrong direction. Kadeisha Buchanan was caught in a bit of a lose-lose situation when she decided to slide over to help shut down Pruitt, but ultimately she left Johnson wide open on top of the box to take on Foster 1v1, never a position any goalkeeper wants to be in.

Johnson’s second goal, which sealed the game for the Trojans, resulted from a classic counterattack after the Mountaineers sent numbers forward in a push for an equalizer. That in and of itself wasn’t a mistake, but it allowed Johnson to break free and find Foster cheating off her line. The redshirt senior had no trouble sending it far left post from distance.

As stated previously, WVU held the advantage in shots by far, but only nine of their 21 shots were on frame. Many of these chances were created from their nine corner kicks, but none of those resulted in a goal either. While a large part of that credit belongs to Trojan goalkeeper Sammy Jo Prudhomme, who collected eight saves and managed to get a hand on a number of other shots, the Mountaineers struggled to truly put Prudhomme to the test. Loose ball after loose ball ping-ponged around the Trojan box, but too many times the Mountaineers couldn’t get a good touch. They also struggled with second balls, as a number of rebounds fell favorably to them but weren’t followed up on.

This was particularly evident in the second half after USC regained the lead, when WVU began to take wasteful shots from distance any chance they got, sending them well wide and high of the goal. They were plain unlucky at times, but ultimately they created enough chances that WVU could have put this game away. In the game of soccer, sometimes it comes down to thirty seconds of brilliance rather than who is the better team for 89 minutes.

SUPER SUBS SAVE THE DAY

Neither Pruitt nor Johnson started for the Trojans, coming off the bench in both halves. Pruitt totaled barely over half an hour of playing time, yet she made her mark well before her assist to Johnson. The sophomore forward brought a spark of energy to a team that spent much of the game chasing the ball in possession of WVU, and her battles against Buchanan were part of the highlights of the match. The ball that Andrews lobbed down the pitch at first looked to be a wasteful long ball headed out of bounds, but Pruitt did well to run it down before going 2v1 against a strong centerback pairing that included four-time Big 12 Defensive Player of the Year Buchanan, and still got the pass off to Johnson.

Johnson played closer to an hour, but like Pruitt, it was her second half exploits that left her mark. Already a hero for her game-winning goal against Georgetown in the semifinal, she did one better for the final, tallying an insurance goal on top of the game-winner. Johnson brought an offensive presence the Trojans were lacking in the first half and made a depleted and tired WVU defense pay.

USC head coach Keidane McAlpine used two more substitutes than WVU coach Nikki Izzo-Brown, and no Mountaineer sub played more than 27 minutes. A thousand factors can go into winning a soccer game, and sometimes the bench makes all the difference.