College Cup a reflection of the year in sports 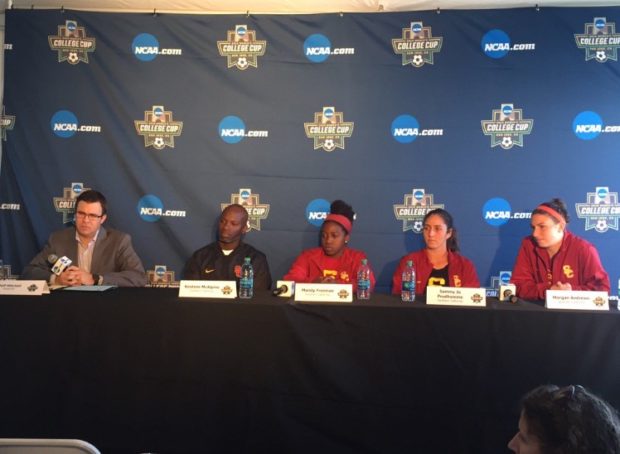 SAN JOSE, CA. —SAN JOSE, CA. — Reflecting on the year as the clock runs down on 2016, one theme that’s been prevalent throughout in sports has been the discussion of societal issues. Certainly, women’s soccer is no exception with the discussion of equal pay and opportunity in relation to the U.S. women’s national team and Megan Rapinoe kneeling in solidarity with Colin Kaepernick dominating headlines throughout much of the year.

You don’t have to look far to see that societal issues are also interwoven into the fabric of the last major event on the North American women’s soccer calendar. In fact, the very location of this year’s College Cup is the result of a social problem that the nation is currently grappling with.

This College Cup was supposed to be held in Cary, N.C. (after Orlando’s new stadium fell behind construction schedule) but the NCAA decided in September that North Carolina’s H2B law, denying transgender persons the right to use the bathroom of their choosing, contradicted the organization’s anti-discrimination policy. Thereafter, it was a mad dash to find a replacement host and get ready for the event.

In San Jose, there haven’t been many direct references to the reason for the move.  It’s come up  though with people complimenting Avaya Stadium and the West Coast Conference for getting the event together with less than two months notice and in discussions of how an East Coast final would have made for easier travel for most of the participants and their fans.

Beyond the venue change for the event lies other issues that have been at the forefront as of late. On Sunday, the title will be decided between a school with a woman at the helm in Nikki Izzo-Brown’s West Virginia and another with an African American male counterpart in Keidane McAlpine’s Southern California. You don’t have to look at the history books to know that’s a rarity. In fact, it’s a first.

In the final press conference before Sunday’s championship, both sides fielded questions concerning issues of diversity.

“Right at the beginning of my career, so to speak, to see him on that stage was important,” McAlpine said of Portland’s former coach Clive Charles, the only African-American coach to win the women’s College Cup. “Hopefully, it will be equally important going forward. For the players, I know as a player myself I was often the only one (African American) on my team. So to have this kind of diversity in a game of this magnitude will do nothing but continue to grow the game because we need it in this country as well as others.”

Before Amanda Cromwell’s UCLA squad brought home the title in 2013, only one woman had won a national title as a head coach, Florida’s Becky Burleigh in 1998.  In each of the last five years, a female head coach had made it to the title game and woman has been the helm of two of the last three national title winners. Izzo-Brown has the chance to join a short but growing list women’s coaches who have won the ultimate prize in the college game.

“It was incredible when Becky (Burleigh) did it,” Izzo-Brown, who was then in her second year as a head coach at West Virginia, said. “…I hope that everyone looks to me as one of the best, especially this year if we do hoist that trophy, but I do think there are role model opportunities for me being a woman and being in this situation…. If there are young women out there questioning if they can or can’t do it, well they most certainly can do it.”

In truth, Izzo-Brown is already a role model, as her current assistants and a number of her former assistants, are former players.

“I do believe that women have a great perspective and we should celebrate it and I’m so fortunate that some of my former players have chosen the path of coaching,” Izzo-Brown said. “I have a lot in the coaching profession but I’m also blessed that two of my former players are alongside of me every day and making me better and that they are going to continue to be some of the great young coaches in this profession.”

Izzo-Brown said she’s faced issues of having to “prove herself” in ways that her male counterparts wouldn’t have. Given women head coaches’ recent record in the College Cup perhaps it should be the reverse especially if WVU is victorious tomorrow. Women make up just over a quarter of all head coaches in the sport. Across the board in women’s college sports, it’s even worse for African Americans, who constitute less than 16 percent of all head coaches in comparison to almost 39 percent for women.

The rosters of West Virginia and USC are also diverse in relation to other women’s soccer programs. While soccer is known as the world’s game, in the United States, soccer is a decidedly suburban, middle or upper class, white sport. For these two programs, athletes of color feature prominently. For the Trojans, Mandy Freeman and Kayla Mills feature prominently. Canadian international Kadeisha Buchanan and Ashley Lawrence, both black, are the undisputed stars.

“People aren’t used to seeing people that look like them on a stage like this,”  Mills said about the diversity of her team Saturday. “They see it and we’re definitely excited – I know I’m excited – about being able to inspire people and open up doors.”

Megan Rapinoe took kneeling for the National Anthem into the women’s soccer world.

The extensive connection sports and issues that impact our culture on a macro level this year has generated a lot of discussion in a wide array of locales throughout the nation. One such discussion took place between the members of the Southern California women’s soccer team this fall.

Members of the team wished to kneel for the anthem prior to a game in a nod to Colin Kaepernick’s kneeling in protest of police brutality against the African American community. Some wished to kneel while others wanted to stand. In the end, the protest occurred before a game, with each player choosing what to do for herself. McAlpine called the conversation among the team that proceeded the game one his proudest days as a coach.

“To see women sit there and open up honestly, freely and emotionally, there were tears, there was anger, there was all of those things,” he said. “But at the end of it, we were reminded as Americans and as citizens – well most of us  – that we share the ability to have differences in this country and that’s okay.”

The social issues of equality, and diversity that have permeated sports’ headlines including women’s soccer will continue long after the confetti is swept from the grass at Avaya Stadium. What remains to be seen is whether the conversations continue will too or will they be swept away.