Buchanan, Lawrence hope to lead WVU to title together 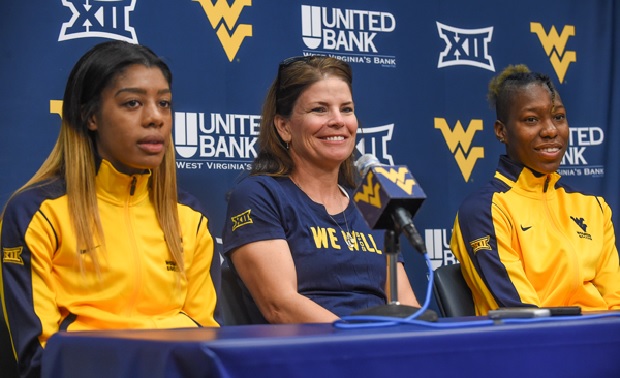 SAN JOSE – “Country roads, take me home. To the place, I belong,” members and staff of the West Virginia Mountaineers belted out on the field at Avaya Stadium after the final whistle blew Friday, having punched their ticket to Sunday’s championship game.

The song “Take Me Home, Country Road” is steeped in tradition at West Virginia University and the state as a whole. It’s been played at every home football game since 1972, other sporting events as well, and is even widely played at weddings in the state.  In fact, John Denver’s tune about traveling back to “almost heaven” as the lyrics go, is actually an official song of the Mountain State.

“Whenever we’re at home and we win a game, they play the song,” senior midfielder Ashley Lawrence said. “It just feels like that sense of home, like we’re back in Morgantown at Dick Dlesk Soccer Stadium. Even though we’re in San Jose, California or wherever we are.”

It’s a fitting song for Mountaineers captains and Canadian internationals Lawrence and Kadeisha Buchanan to sing given the amount of miles they’ve traveled both literally and figuratively together since they arrived in Morgantown, W.Va four years ago. On Sunday, they hope to sing the song one last time together as victorious West Virginia student athletes.

On the field, the pair are two of the most talented anywhere in the college game. Buchanan, who legendary North Carolina head coach Anson Dorrance said Friday night, directs the ball with her head the way other players do with their feet, has long been touted as one of, if not the, world’s best young center back. Meanwhile, Lawrence’s versatility, ability to score and set the table for her teammates makes her a huge asset to both West Virginia and the Canadian national team.

Each came to the school for different reasons but after those decisions were made, they discussed the opportunity presented in Morgantown. Rather than join a program that had already obtained the college game’s biggest prize, they had the opportunity to take an accomplished program to a new level.

“We decided to both go to the school, and we had a conversation that we could make this program number one and we could play in a national championship game,” Lawrence said. “ It gives me chills when I think about us finally being here in our senior year as captains playing in the national championship tomorrow. So, it’s pretty surreal.”

The road to the national final wasn’t linear, of course, as roads rarely are, especially in the state of West Virginia. The Mountaineers suffered two early stage exits on penalties in previous NCAA tournaments before being eliminated by Penn State in the quarterfinals a season ago.

This season has been truly historic for the Mountaineers.  The team earned its first ever number one ranking in the NSCAA coaches poll and it’s first number one seed in the NCAA tournament. All that’s left now is to the end the season number one with the national championship trophy.

It’s also been a mixed bag at the international level as well, with an earlier than expected exit at last year’s World Cup and a failure to medal at the Pan Am Games that same summer. In Rio, however, the Canadians took home the bronze medal, matching their stellar finish from four years earlier. Against USC, the duo has the opportunity to cap off incredible college careers and an incredible year in style.

Throughout it all, they’ve pushed each other to continuously improve and become better soccer players. Their sparring in 1-v-1 drills in West Virginia’s practices are highly contested battles with neither player conceding an inch.

“She makes me one of the best defenders because, although she plays defense, she’s also an attacking midfielder by heart and striker by heart. Definitely, when we go 1v1 it’s always one up, one down, one up, one down with her,” Buchanan said. “ I think it always ends up being a tie game because we never let up to each other.”

Pushing each other to achieve isn’t just limited to the field either. The best friends and teammates have also been roommates throughout their careers as Mountaineers. Buchanan admits that Lawrence keeps her accountable and makes her do her homework all the time.

“We’ve been best friends since we were young,” Buchanan said. “ I’m always proud to step on the field with her whether it’s with West Virginia or the national team. I’m looking forward to stepping out in my last [college] game with my best friend.”

No matter how their college soccer journey ends Sunday, these two have many more miles to log in their soccer careers. Trophy in hand or not, they’ll travel back to Morgantown as they’ve done so often in their time as Mountaineers–together.