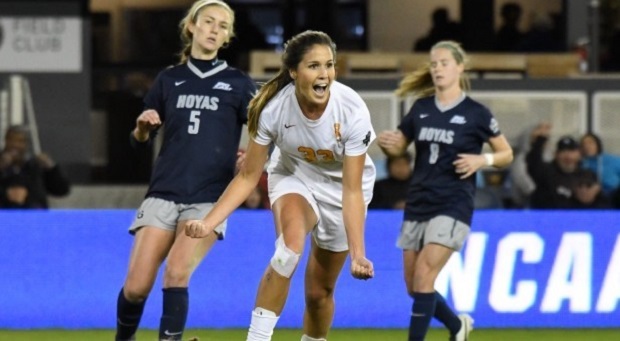 The University of Southern California defeated Georgetown, 1-0, to advance to the 2016 College Cup final.

The result marks just the second time the USC Trojans have advanced it to the national championship game in program history. Their last appearance was in 2007, when they defeated Florida State 1-0 to win the title.

Both USC and Georgetown advanced to the semifinals of the College Cup with 1-0 wins over their opponents, making it little surprise that tonight’s match ended with the same score. A number of factors contributed to the lack of goals, including neither team generating many quality looks on goal and strong defensive showings by both teams. Neither goalkeeper had a stellar night, but neither was heavily tested either. Although the Hoyas outshot the Trojans 9-6, both teams only had two shots on goal all night.

The first half of the match remained scoreless despite both teams having multiple opportunities on goal off of set pieces. Morgan Andrews, a 2016 MAC Hermann trophy semifinalist, had an opportunity for USC with a free kick in the first half, but the kick was from outside the box and Andrews’ ball lacked the power and angle to get past Georgetown keeper Arielle Schechtman. USC had another opportunity off of a corner kick that was sent right to Nicole Molen, but her header was blocked by a Georgetown defender who denied Molen with a goal-line clearance of a header.

Georgetown followed USC’s corner kick with a free kick of their own in close proximity to their goal which was taken by Rachel Corboz, also a 2016 MAC Hermann award semifinalist. Corboz’s free kick went to Marina Paul, but Paul’s shot went just wide of the post although Prudhomme may have had a hand in that as she dove to make the stop.

Despite the majority of the on-goal opportunities coming off set pieces, the first goal of the match was scored during the run of play. In the 60th minute, Morgan Andrews sent a ball to Katie Johnson near the goal box, although Johnson was closely marked by a defender while her back was to the goal. However, she managed to hold the defender off, turn slightly and fired off a shot past a diving Schechtman.

With 30:46 left to play, Katie Johnson finds the back of the net for Southern California! #WCollegeCup pic.twitter.com/qGSIk23iUV

A second goal for USC was almost scored with less than 20 minutes left to play when Katie Bingham sent a corner kick that Leah Pruitt got her head on for a shot towards goal. One of Georgetown’s own defenders attempted to head the ball clear, but the ball was hit in the wrong direction and towards a wide open goal. Luckily for the Hoyas, the ball deflected off the post and was cleared.

Junior midfielder Chloe Knott also came up big for the Hoyas with 10 minutes left on the clock when USC drove the ball up the right side of the field before sending a cross across the turf to a Daria Petredes making a run for it. Schechtman was unable to get in position to stop any shot that was taken, but Knott managed to slide and cleanly knock the ball from the feet of Petredes, avoiding a foul and goal both in the process.

Although the Hoya defense prevented a second USC goal, their attack failed to score a goal of their own, and the remained down a goal at the final whistle. USC won, 1-0, to knock Georgetown out of the tournament.

The win sends USC to the College Cup finals, where they will play WVU on Sunday, December 4 at 6 p.m. EST.