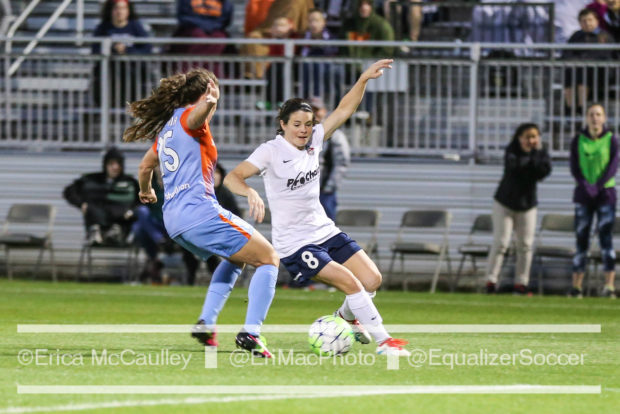 The Breakers acquired Canadian left back Allysha Chapman from the Houston Dash on Tuesday in exchange for the No. 15 pick in the 2017 NWSL draft and an international roster spot through 2018.

“Allysha was one of my top targets in this offseason, and I’m delighted that we have managed to bring her to Boston,” Breakers coach Matt Beard said. “She will add great defensive stability to our side, and she is a threat going forward. She also brings a wealth of NWSL and international experience.”

Chapman entered NWSL in 2015 through the allocation process. In two seasons in Houston, both constantly disrupted by international absence, Chapman has a dozen starts from 14 appearances, mostly as a left fullback. She represented Canada at last summer’s World Cup and at the Olympic games earlier this year. Chapman owns a bronze medal from the Olympic Games.

The Dash had previously been outside the first three rounds following a slew of trades. By acquiring the pick that was originally Kansas City’s and comes by way of Chicago as well as Boston, Dash coach Randy Waldrum is now in possession of the 15th and 33rd picks in the January 12 draft. Due to the complexity of some of the trades involving 2nd round picks, the No. 15 position could adjust slightly if other picks are moved ahead of the draft.

The international roster spot gives the Dash six for the 2017 season. Currently only three are in use. Corey Roepken of the Houston Chronicle reported Tuesday that the club has a verbal agreement with an international central defender.