Five things to know about the 2016 College Cup 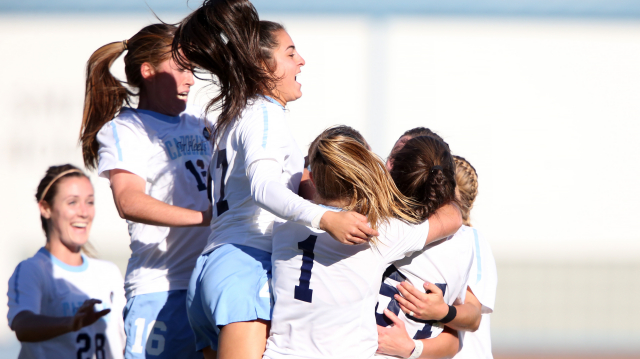 North Carolina is back at the College Cup.

Just three games remain before the championship trophy will be hoisted in San Jose this Sunday. Now that we know which four teams will be making the trip to the College Cup, let’s take a look at this year’s participants, how they got here, and some of the possible storylines to watch.

North Carolina is back in the College Cup for the first time since 2012. This wouldn’t qualify as a drought for any other program but the Tar Heels, one of the most prolific programs in all of college sports. For North Carolina, this recent stretch between college cup appearances is the longest in school history. In fact, there’s only one member of the last championship roster still donning the famous Carolina blue, redshirt senior Hanna Gardner. To put it another way, if the Tar Heels fail to capture the title this season, the 2013 freshman class will be the first to leave Chapel Hill without a national title.

It’s insane that such a streak has lasted so long, but much like the U.S. Women’s National Team has found out in recent years, there are more and more teams with a legitimate shot at winning it all. Whether or not this year’s Tar Heels will hoist the trophy remains to be seen but the team does share a parallel with the last North Carolina team to win. In 2012, the Tar Heels struggled a bit out of the gate with stars Kealia Ohai and Crystal Dunn away with U.S. U-20 duty. With Dunn and Ohai back in the fold, the Tar Heels found their groove and demolished Penn State in the national championship game 4-1. In 2016, North Carolina entered this season having suffered their earliest exit in NCAA tournament history in large part due to a string of injuries the team suffered late in the season.  This year head coach Anson Dorrance had to tinker with the back line a bit but since finding the right combination the team has fared much better.

New Kids on the Block

As old Big East rivals, West Virginia and Georgetown are very familiar with each other. West Virginia moved to Big 12 in 2012 but the teams have dueled several times since then. In addition to being old rivals, these two programs were two of the most established programs without a college cup appearance to their name until now. Since these sides have at last reached the final weekend the question becomes how will they fare?

Not only are these teams making their first appearance in the semifinals, there are the only teams shooting for their first national title in San Jose. Southern California won it all in their first appearance back in 2007 and North Carolina has won more titles than all other teams combined. Only two teams have won the national championship in their first college cup, the Trojans being one and Florida being the other. This would seem to cut against this year’s new entrants, however, this is also only the second time since the tournament started (aside from inaugural NCAA tournament in 1982) that none of the four teams participated in the preceding college cup.  Therefore, few players for any side have college cup experience from which to draw.

The Mountaineers do have two players with extensive experience at the international level in Kadeisha Buchanan and Ashley Lawrence. Both Lawrence and Buchanan were members of Canada’s most recent World Cup and Olympic teams. Their experience at dealing with the added media pressure and rigorous schedules that come with full international competitions could valuable as given the dearth of experience elsewhere in the College Cup field in this regard.

The idea of a player that you bring off the bench to spark the offense and inject energy isn’t a new phenomenon. Super subs are a hotly contested area of the game with observers and pundits alike are deeply divided over whether  the idea of “the super sub” has merit or not. While this is debatable the impact two such players have had in punching their respective teams’ tickets to San Jose is not.

In truth, given the Tar Heels frequent substitutions, it’s not surprising for a large number of their tournament goals have come this way.  Nonetheless, freshman Madison Schultz’s recent form is astounding. Schultz has five game-winning goals in the last eight games, including three of the four tournament games North Carolina has played. On Friday, the forward scored the only goal in the contest against South Carolina less than two minutes after entering.

Crystal Thomas, who plays the role of super sub for the Hoyas, is on the opposite end of the experience spectrum from Schultz. The graduate student was a full-time starter for Georgetown last season. Coming off the bench has paid off for coach Dave Nolan and Thomas as her goal total has increased from seven in 2015 to 11 this season. Her latest came on a well struck ball from outside the eighteen-yard box Saturday against Santa Clara.

If either team makes it to Sunday, having a proven goal scorer coming off the bench could pay huge dividends. Fatigue tends to impair the quality of the championship game as the finalists play two games in a less than 48-hour timeframe. Under these conditions, a super sub may well difference.

Morgan Andrews and Crystal Thomas were once teammates at Notre Dame. Several years later these two will face off this Friday for a ticket to the national championship match. Andrews is the fulcrum of the Trojans’ midfield, and Thomas’ is one of the Hoyas’ leading scorers.  While these two have been instrumental in getting their teams to this point, they aren’t the only impactful transfers on their respective rosters.

For Georgetown, Arielle Schechtman filled the hole left by standout keeper Emma Newins’ graduation, helping the team to record sixteen shutouts this year. Perhaps none of her 68 saves this season was as big as the stop she made on Santa Clara’s Jenna Roering on a breakaway opportunity in last weekend’s quarterfinals.

In addition to Morgan Andrews, the Trojans have a slew of transfer players that have significantly impacted the course of the team’s season. Sammy Jo Prudhomme, an Oregon State transfer, won goalkeeper of the year in a conference that features several highly touted goalkeepers. Meanwhile, Maryland transfer Alex Anthony leads the team with 10 goals. The aforementioned Andrews is second with nine.

It’s Too Early To Call It Trend But…

Before 2013,  Florida’s Becky Burleigh held the distinction of being the only female head coach to win the national title. In two of the last three seasons, UCLA’s Amanda Cromwell and Penn State’s Erica Dambach (nee Walsh) have joined Burleigh. West Virginia’s Nikki Izzo-Brown is the only female head coach left in the tournament. West Virginia enters the final weekend, favored to bring home the hardware, it will be interesting to see if this list continues to grow.

The fact that only one female head coach made the College Cup lines up with statistics as University of Minnesota’s Tucker Center for Research on Girls and Women in Sport reports the only 26.5% of women’s soccer  head coaches at the Division I level are women. In a year when the U.S. Women’s National Team drew attention to the differences to equal opportunity and equal pay, perhaps women’s soccer fans who are otherwise neutral will root for the Mountaineers to lift the trophy