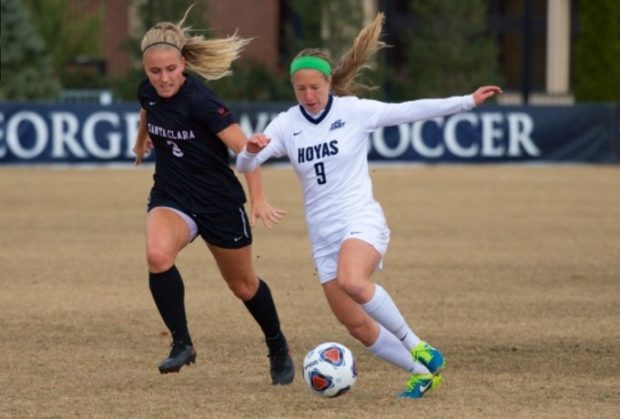 Crystal Thomas scored the quarterfinal-winning goal for Georgetown, sending them to the College Cup for the first time in program history. (photo courtesy Georgetown University)

Graduate student Crystal Thomas scored the game’s only goal in the 76th minute to send the Hoyas to their first-ever College Cup. Thomas sent a rocket past Santa Clara keeper Melissa Lowder from the top of the box for the game-winner.

In a game dominated by defense, Thomas’ goal was a moment of brilliance that even a well organized Broncos’ backline couldn’t stop. It’s a moment that the Notre Dame transfer had waited a long time for.

“I lost in the Elite Eight,” Thomas said when asked how far she had made it in the NCAA tournament with her previous team. “This time I wanted to win. It only took five years,” she added with the laugh.

Thomas wasn’t the only transfer that played a huge role in the Hoyas’ first win in the NCAA Quarterfinals. Arielle Schechtman came up huge for the Hoyas earlier in the second half when Santa Clara had a golden opportunity to take the lead.

In the 57th minute, Jenna Roering got in behind Georgetown’s backline to create a 1v1 opportunity. Schechtman came off her line to cut down Roering’s angle. Schechtman was able to deny Roering’s initial chance and Roering’s ensuing attempt off the rebound was off target.

“Just 1v1 as a goalie, you’ve just got to make yourself as big as you possibly can and try to get a reflex, a reaction save on it,” Schechtman said about the play that one of the deciding moments in the game.

Shortly after the Roering’s opportunity, Schechtman was forced to come out again with the Broncos charging towards goal. This time, Schectman’s feet met with a Bronco’s player, upending the latter. Schectman received a yellow card for the challenge and the momentum swung in Santa Clara’s favor.

The Hoyas back line withstood the challenge all game despite an early injury to stalwart outside back Drew Topor in the 21st minute. Meaghan Nally replaced Topor and the Hoyas’ back line continued to stifle the Broncos attack especially in the first half.  Georgetown’s fullbacks were exceptionally proficient at isolating Santa Clara’s attackers’ near the sideline and then dispossessing them before the Broncos were really able to launch an attack.

At the other end, Santa Clara did well to get numbers behind the ball any time Georgetown was in possession. The game plan to shut down one of the nation’s most potent attacks nearly worked. The Hoyas found little room in their attacking third to operate. In fact, it took a long-range effort from Thomas to topple the Broncos’ defense.

In the postgame huddle, Georgetown head coach Dave Nolan made his team laugh by singing the first verse to Dionne Warwick’s Do You Know The Way To San Jose after inquiring if the players knew it.  They didn’t which isn’t surprising as it predates most of them by nearly three decades.

Similarly, while the Hoyas may not know the exact path to the national championship yet, they know their next obstacle the road to the final will be the Southern California Trojans. Before making their way to San Jose for the semifinals, they’ll spend the next few days familiarizing themselves with the Trojans and Warwick’s lyrics.