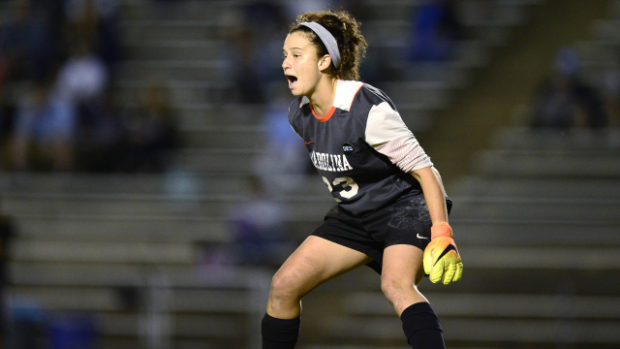 North Carolina is back in the College Cup for the first time since 2012. Can the sport’s most storied program lift the trophy once more? (photo courtesy Jeffrey A. Camarati and UNC)

For the second week in a row, a substitute for the Tar Heels provided the game’s only goal as North Carolina defeated South Carolina to continue its quest for the program’s 23rd national title. On Friday night, it was a goal by Madison Schultz that proved to be the difference in the border battle.

The real star of the game for the Tar Heels was senior keeper Lindsey Harris, who stymied the Gamecocks offense on several dangerous opportunities, especially before Schultz’s game winner, to preserve the shutout. Harris made 8 saves in the contest to give her 90 saves on the season, a program record.

North Carolina’s Bridgette Andrzejewski got the first dangerous chance of the game in the sixth minute of play when she tried to go near post from inside the box, but Gamecock keeper Mikayla Krzeczowski denied her.

South Carolina appeared to gain some momentum just before the 15-minute mark as the Gamecocks forced Lindsey Harris to make a stop right on the line. South Carolina protested in vain that the Harris crossed the line to make the stop.

The Gamecocks got another couple of chances in quick succession as the Tar Heels defense cleared a Savannah McCaskill’s header off the line. A rebound opportunity by Kurtz was then saved by Harris. The saves by Harris shifted momentum in the Tar Heels’ favor, as North Carolina controlled more of play and created more opportunities thereafter in the half.

The deadlock was broken in the 22nd minute with freshman Madison Schultz lobbing a ball past Krzeczowski less than a minute after entering the match. It was Schultz’s fifth goal of the season, all of which have come in the last eight games. Annie Kingman was credited with the assist.

While the Gamecocks generated more chances than the Tar Heels, overall those chances were less threatening than the ones attempted by the winning side as the Gamecocks had trouble connecting in the final third for most of the game.  North Carolina did well to provide support every time Savannah McCaskill was on the ball for South Carolina.

With five minutes remaining in the half, South Carolina’s Anna Conklin nearly equalized. The junior rifled a bending ball from well outside the 18-yard box just off target.  Unluckily for the Gamecocks, Conklin’s shot hit off the post.

About ten minutes into the second half, the Gamecocks were given their best opportunity of the night after a penalty kick was awarded to South Carolina. The referee signaled for the spot kick after McCaskill went down in the box after a bit of contact with a Tar Heel defender. Harris once again came up big for North Carolina, diving to her right to stop the ensuing penalty kick taken by Sophie Groff.

In the 76th minute, Schultz nearly scored again as a ball got behind the Gamecocks’ defense and gave the freshman a 1v1 opportunity with the keeper. Solid goalkeeping once again prevailed as Krzeczowski came off her line and cut down Schultz’s angle to make the save.

In the end, the Gamecocks’ efforts to equalize were in the vain. South Carolina ended the game with 16 chances to North Carolina’s 14. With the victory, North Carolina advances to the College Cup for the first time since 2012, which is also the last time the Tar Heels lifted the national trophy. North Carolina will face the winner of West Virginia and Duke next Friday in the semifinals.