USC advances to College Cup with 1-0 win over Auburn 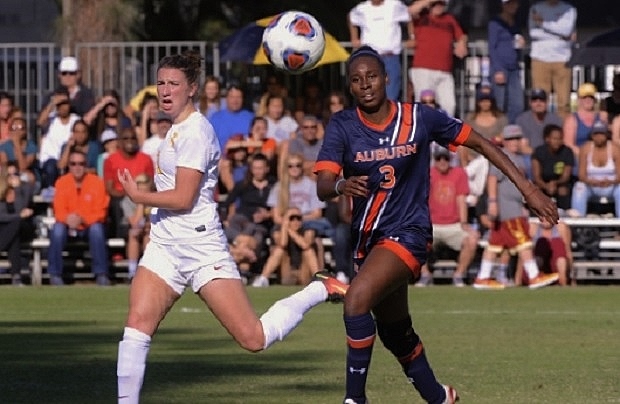 USC defeated Auburn, 1-0, on the Trojans’ home field in Los Angeles to advance to the NCAA tournament semifinals. The last time the Trojans made it to the College Cup was back in 2007 when they went on to win the championship title.

Going into the match, Auburn had outscored opponents 11-2 and had scored the most goals of any team in tournament play. All of Auburn’s tournament wins had also occurred in regulation, while USC had to survive two penalty kick shootouts to advance to the Elite Eight. That may seem to have given Auburn a slight advantage going into today’s match, but the Trojans defeated Auburn 2-0 back in September and had a tougher regular season schedule than the Tigers. The Trojans also got to enjoy the home-field advantage as a result of Auburn’s upset of the no. 1 seed Florida Gators in the third round. All things considered, USC entered the match with a slight advantage over Auburn, and it showed.

Despite a 15-minute window during the first half where Auburn gained momentum, the match was dominated by USC, who scored an early goal and never relinquished the lead. The Trojan defense did a superb job of reigning in the attacking efforts of Auburn’s powerhouse trio of twins Brooke and Casie Ramsier and Kristen Dodson, something few other teams had managed to do this season.

It did not take long for Alex Anthony to put USC on the board, scoring in just the fourth minute on a play that originated on a set piece. Sydney Johnson beat defender Karli Gutsche to the ball near the end line and earned a corner kick for the Trojans. Although the corner kick was originally cleared out, Mandy Freeman played it back in with a through ball to Julia Bingham, who sent a right-footed cross in towards goal. The cross was a little short, but Anthony got just enough of a touch on the ball to put it past Auburn goalkeeper Sarah Le Beau. Le Beau managed to get her arm on the shot, but it was not enough as the shot deflected off her arm and into the goal.

USC continued to control the first half of the match until about the 20th minute when Auburn picked up their momentum. C. Ramsier really got the Auburn attack going when she tested Sammy Jo Prudhomme with a half-volley from the top of the box while Prudhomme was off her line, but the shot went just over the crossbar. Gianna Montini then put a header on goal off a Taylor Troutman free kick, but Prudhomme easily collected it to prevent the equalizer. In the 25th minute, C. Ramsier was fouled just above the arc for an Auburn free kick. Courtney Schell took the kick, and her shot split the wall but deflected off the post. Moments later, Dodson created another opportunity for the Tigers, but the ball went just wide of the post.

USC then started a late-half surge towards goal, trying to increase their lead before heading into the locker room. Leah Pruitt created a dangerous opportunity for the Trojans when she drove the ball into the box before serving it over to Katie Johnson. Johnson fired a hard shot at Le Beau, but Le Beau dove to knock the ball back into play. K. Johnson had another close call on goal with less than a minute left in the half when she went 1v1 with Le Beau, but Le Beau came off her line and splayed out in front of the ball, sending K. Johnson sprawling and coming up with the ball. Less than a minute later the whistle blew, and the Trojans went into halftime leading 1-0.

The second half was dominated by USC, with the Trojans maintaining possession in their offensive half and putting pressure on the Tiger defense and goalkeeper. Auburn’s attack suffered a blow when freshman phenom Bri Folds, who has six goals on the season including the game-winning penalty kick in Auburn’s Sweet 16 win over Florida, went down on a play and was slow to get up, limping around the field before eventually coming off in the opening minutes of the second half. However, Folds just seemed to have tweaked something, as she subbed back on just minutes later, but she never seemed to be back at 100 percent.

As to be expected in an elimination match, the intensity and physicality increased in the final 30 minutes left, and there were a number of fouls from both sides. USC received a free kick in their attacking third on the right side of the field, but Morgan Andrews’ free kick was headed clear by Brooke Ramsier. Moments later, Samantha Solaru tried to clear out a ball in front of the goal, but the clearance deflected off USC’s K. Johnson and almost into the Auburn net for an own goal, but Le Beau was there to make the stop.

Auburn’s best opportunity on goal in the second half came in the 73rd minute when Kiana Clarke took the ball almost to the end line before sending in a cross to Kristen Dodson. Dodson’s header was on target, but Prudhomme made a huge save to keep Auburn off the board.

Sydney Johnson had a solid opportunity on goal for USC with less than 15 minutes left on the clock, but Le Beau punched the ball back out. Sydney Sladek then followed up with her own chance on goal, but Le Beau came out and jumped in front of the ball and knocked it out from in front of Sladek’s feet to rob her of the opportunity. Late in the second half, Julia Bingham stole the ball and started a nice passing sequence for USC in which Ashleigh Plumptre centered the ball to Pruitt who took a one-timed a shot, but the ball soared just over the crossbar and out of play.

USC never let up their strong defensive and offensive efforts in the second half, and that prevented Auburn from ever finding their footing as they sought an equalizing goal. When the final whistle blew, Anthony’s goal remained the lone goal of the match, and USC advanced to the College Cup.

The USC Trojans will next take on the winner of tomorrow afternoon’s quarterfinal match between Santa Clara and Georgetown. That College Cup semifinal match will be played on Friday, December 2 at either 5 or 7:30 p.m. EST.

Check back with The Equalizer as we continue to keep you up to date on all this weekend’s NCAA tournament action.