The Lowdown: XI things to be thankful for, NWSL style 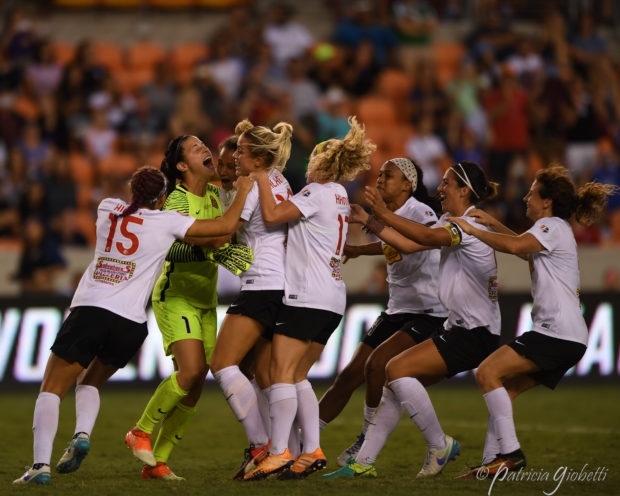 The Flash capped the 2016 NWSL season by winning the championship on penalties. (photo by Patricia Giobetti for The Equalizer)

The Lowdown is back! And with Thursday being Thanksgiving it’s time for the list of XI things to be thankful for in NWSL. I did this last year and some of the items are repeated but I intentionally did not go back to read that one before typing this one out. So we’ll see how much my perspective had changed in the last year.

Not only is this match easily the best advertisement for NWSL over its four-year existence, it has to be in the conversation for game of the year in North American sports. From the first minute to the last, this match had it all. There were great saves and great finishes; defensive mastery and defensive blunders; questionable calls and questionable non-calls. Most importantly the entire two hours was played with the sort of intensity and ferocity that we all want from our favorite athletes. Simply put, the match mattered a great deal to all who took part in it, and it showed. If you missed it, go ahead and give it a watch. If you watched it, consider doing so again. And if you’d rather not, just take a look at the effort from the Flash on Lynn Williams’s go-ahead goal in extra time.

In its continuing effort to make the NWSL Championship a bigger deal every year, the league arranged a small media day this year in Houston where every player from each team was made available during two, 30-minute sessions (both of which ran over time). This led to far greater variety in the stories my colleagues and I were able to produce from the week. Hopefully it showed. This format should also bolster future story opportunities and serve as an enticement for more media to make it their business to cover what should soon be the seminal women’s soccer weekend of the year.

Williams’s second season in NWSL was a masterpiece. She scored 11 goals and helped the Flash to an unlikely championship. Along the way she was named to the league’s Best XI, voted Most Valuable Player, and made her national team debut, scoring 49 seconds in (a team record that stood three days until Kealia Ohai broke it by a second). But what stood out about Williams was being able to speak to her during NWSL Championship week. She came across as intelligent, insightful, and completely unencumbered by the accolades, some of which had been bestowed upon her that very day.

NWSL is filled with fascinating people. Williams is just one, and admittedly she garnered more attention because of the excellent season she had. But if I had to pick one player to run out in front of cameras to help promote the league, it would be her.

My family stays behind the scenes, except when they make the rare cameo at Yurcak to take in a Sky Blue match. But like others who spend much of their free time covering NWSL and women’s soccer, I could not do it without their support. The words “Sorry, big trade just announced,” are all too common in my house.

You may notice them on our bylines nearly every day, but the fact is The Equalizer Staff at large is filled with many dedicated people who contribute to this site in a variety of ways. From writers to editors to photographers, every person who contributes to Equalizer does it out of passion for the women’s game and wanting to be part of something great. Some contribute mostly ideas, and they can be as valuable as anything else. The staff has grown in 2016, my first as managing editor, and together we hope to provide more great coverage in 2017.

Corey Cohen proved to be an outstanding broadcast partner who never came to the booth unprepared. Danielle D’Avanzo, who has forgotten more about soccer than I will ever know, helped ring in the matches by guiding me through pregame and helping me to see deeper into the game. Evan Davis took it upon himself to spruce up halftime and was an ample substitute for Danielle when called upon. Together with Curt Ciumei and his team, Sky Blue broadcasts continued to improve in 2016.

The NWSL coaches are a fun lot – most of the time. While their personalities differ wildly, they are similar in that every one of them is willing to take time out to discuss their teams, the league, and soccer in general. Often the most beneficial of these chats are the ones that never make it to print, but they are invaluable in helping me and other writers understand the league as well as some of what each club is trying to accomplish. I will single out one this time – Christy Holly. The Sky Blue coach went above and beyond this year both in supporting the broadcast team and taking me deeper into the tactical side of soccer.

The days of The Equalizer being a novelty are long gone. This is not a bad thing. The rise (and sometimes fall) of other sites strictly dedicated to or with heavy focus on women’s soccer has been a boon to all who yearn for NWSL to become sustainable for the long term. They have also forced Equalizer and myself to continue striving to be better at what we do. Backlinesoccer.com sprouted up from nothing and has dared to take on social issues around the sport as well and delved into the past with founder RJ Allen’s piece on the 2009 Sky Blue side. They were also considerate enough to loan us Chelsey Bush.

IX. A culture of inclusion

When Britt Eckerstrom’s house burned down just ahead of preseason leaving her, Tori Huster, and Tiffany Weimer with next to no soccer equipment, a GoFundMe quickly sprang to life and almost as quickly exceeded its stated goal. (A similar campaign after the season, for Alexa Newfield, fell short of its goal but still generated nearly $12,000 in less than 30 days – that one remains active). It is an easy cliché to speak about how great the “woso community” is when one of its own is in trouble, but I can also say that I have been associated with many other industries where that is simply not the case as it seems to be here. We’re not a perfect group, but inclusion is not a problem around women’s soccer.

Similarly, when Jen Cooper and the Houston Dash combined to put NWSL Championship tickets on offer to donate to GonzoSoccer kids, there was some concern there would not be enough children to use all of the tickets. And the support that poured out of NWSL and its teams following the horrific shooting at Pulse Nightclub felt genuine from a league and industry that long ago became a safe haven for LGBT folks.

(note: the most impressive tribute I saw came from the Pride’s brother side, Orlando City SC who placed balloons over prime seats, one for each victim of the shooting.)

Nothing keeps my energy for covering NWSL high like someone going the extra mile to make things easier to do the job. At the NWSL Championship, Dave Maurer’s effort to track down a photo of Sabrina D’Angelo’s jersey with her grandfather’s name on the back made the perfect accessory to Kieran Theivam’s outstanding story about the game’s MVP. A few weeks earlier in New Jersey, Alyssa Naeher waited for me to finish an interview just so she could answer for me what were very likely the same questions she had just answered for others. It was Naeher’s first match after Hope Solo was suspended by U.S. Soccer, so you know how excited she must have been to answer them once, let alone twice. When I asked Joanna Lohman about writing a long-form story, she not only agreed but invited me into her world for a day (This story is due out next month.)

If you have done something similar over the last year, it was very much appreciated.

A site can only be as good as its readership allows it to be, and those who loyally return to our pages certainly make a difference. As a small-scale operation, we don’t pay full-time editors, but not to worry, our smart and perceptive readers are always around to let us know when we have messed something up. But whether you’re fact-checking us, blindly believing every word, or somewhere in between, know that everyone who reads The Lowdown or any other part of Equalizer is very much appreciated. And for those if you who follow along on Twitter (@thedanlauletta) keep those dissenting opinions coming my way. They keep me on my toes.

Everyone in the U.S. have a very happy Thanksgiving!