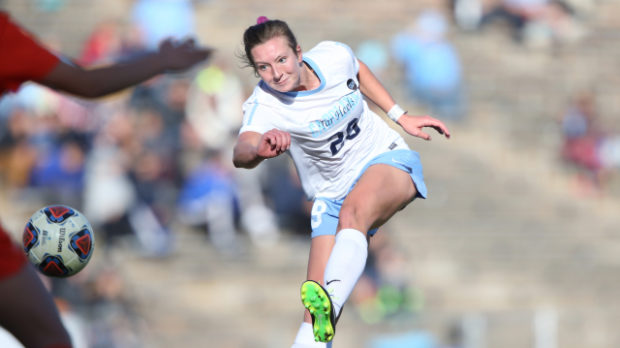 The third round of the 2016 NCAA tournament is underway, with 16 teams competing for a spot in the tournament quarterfinals. The Round of 16 kicked of Saturday night with a match between BYU and South Carolina. Here’s what what went down in the NCAA tournament Sweet 16.

South Carolina, the no. 1 seed in their quadrant and the no. 3 team in the nation, became the first team to advance to the NCAA tournament Elite 8 after defeating BYU, 1-0.

As to be expected with any match this far in the tournament, it was not an easy win for the Gamecocks. Instead they struggled for a large portion of the match, unable to possess the ball or keep up with the speed of BYU. Despite being the lower seed in the tournament, BYU controlled the ball for much of the match. In the first half, BYU maintained possession in their offensive half for much of the first 20 minutes.

South Carolina eventually found their rhythm to create momentum for themselves, and by the end of the first half, the Gamecocks had outshot the Cougars 10-5. A number of those shots were on the same play that originated with a Savannah McCaskill corner kick and nearly resulted in a goal for the Gamecocks. McCaskill’s ball went in right in front of goal, and a couple of Gamecocks got their feet on it, but the BYU defense came up big with two goal-line saves to keep South Carolina from scoring. The match went into halftime still scoreless, largely thanks to the BYU back line.

South Carolina came into the second half with much more energy, but the BYU defense held them to zero shots through the 69th minute. As the intensity and physicality on the field increased to an all-time high, Savannah McCaskill was fouled in the box and South Carolina was awarded a penalty kick. Chelsea Drennan stepped up to the spot for the Gamecocks, and she fired a shot into the bottom right corner and into the back of the net for the game-winning goal for South Carolina.

Despite strong showings from Michele Vasconcelos, Ashley Hatch and Nadia Gomes, BYU was unable to find a goal of their own, and the Gamecocks would advance to the Elite 8. There they will take on the UNC Tar Heels on Friday, November 25 at 6 p.m. EST on the Gamecocks’ home field.

North Carolina returns to the Elite Eight for the first time since 2013 after defeating Clemson, 1-0.

The match was a hard-fought contest between the two ACC teams, with both teams’ defenses coming up big to reduce the number of looks each team got on goal.  UNC just edged out Clemson 11-10 in shots taken, but it would be that one extra shot that would be the difference maker between the two teams.

With just under 20 minutes left in the match, Dorian Bailey scored for the Tar Heels on a good possession play that originated on a set piece. Zoe Redei served a ball into play from the right flank, which Madison Schultz, who scored the game-winning goal against Kansas on Friday, got a foot on before sending it over to Bailey. Bailey took a a couple of touches before sending in a rocket from well outside the 18. Her shot went into the upper 90, making it nearly impossible for a leaping Sheridan to get a hand on it. 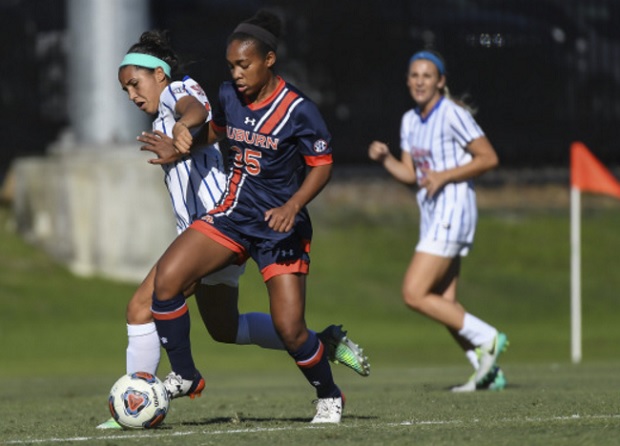 Auburn defeated the Florida Gators, 3-1, to advance to the Elite Eight for the first time in program history. The win was courtesy of goals by Brooke Ramsier, Bri Folds and Kristen Dodson. Brooke Sharp scored the Gators’ lone goal of the match, but it was not enough as Florida has never won this season when being scored on first.

Auburn took only one shot in the first 45 minutes, but that was all they needed. Brooke Ramsier put Auburn on the board with about 20 minutes left in the first half when Kristen Dodson switched the field from one side of the box to the other. B. Ramsier thigh-trapped the ball and then half-volleyed it past Gator goalkeeper Kaylan Marckese to give Auburn a one-goal lead at halftime.

With just under 30 minutes left in the match, Kristen Dodson made a run towards goal but was stopped when she was knocked to the ground by Florida’s Rachelle Smith. Smith was sent off with a red card while Auburn was awarded a penalty kick. Bri Folds stepped up to take the penalty for the Tigers and easily put it past Marckese, who jumped left a split-second before the ball left Folds’ foot.

Even playing a man down, Florida answered almost immediately when Brooke Sharp, who scored the golden goal in the second overtime period in the Gators’ second round win over Wisconsin, caught Le Beau unaware and put a ball in the back of the net to cut Auburn’s lead in half.  Savannah Jordan had a chance to level the score late in the second half, but she went for a half-volley instead of a diving header and her shot was off the mark. With less than 10 minutes left, Jordan ripped off another shot, but Le Beau (6 saves so far) made a diving save to knock it off target.

Kristen Dodson struck again for Auburn with five minutes left when she took a long-range shot that chipped Marckese for the Tigers’ third goal of the match. Shortly thereafter Dodson made a breakaway with three Gators trailing, only to be tripped up and hurt on the play. Mayra Pelayo was shown a yellow card for the foul, but Dodson had to be helped off the field holding her right arm in pain and was shown with her shoulder wrapped and iced at the end of the match. If she’s unavailable for Auburn next weekend in their match against USC, it would be a huge loss for the Tigers as she has set the program record for career points in the Tigers win over UConn.

The Tigers advance to the NCAA tournament Elite Eight where they will face USC on the Trojans’ home field.

USC advances to the Elite Eight after defeating Utah, 1-0, with a second-half goal.

Utah surprised almost everyone by upsetting Florida State in the second round, making program history by advancing to the Sweet 16 round. However, Utah’s luck ran out on Sunday against the second seed and third-overall-ranked USC, and they were unable to repeat the upset. The Trojans outshot the Utes 18-8, putting two more shots on goal than the Utah side.

The Utes managed to keep the Trojans scoreless all through the first half, with both teams’ defense limiting the other side to just one shot apiece after the first 15 minutes of the contest.  Despite a strong effort by Utah’s goalkeeper July Mathias, the Trojans got on the board in the 73rd minute off a corner kick. Julia Bingham took the corner for USC, and the ball was headed into the box by Nicole Molen where it bounced around a few times before Leah Pruitt took a shot. Mathias knocked the ball out, but Pruitt was quick to put the rebound past Mathias and into the back of the net for the lone goal of the match.

Utah fought hard for the remainder of the match for another late goal to knot things up and send the match into overtime, but they fell just short and the whistle blew, ending their historic season.

With the 1-0 win, USC advances to the Elite Eight, where they face the no. 4 seed Auburn Tigers at McAlister Field next weekend.