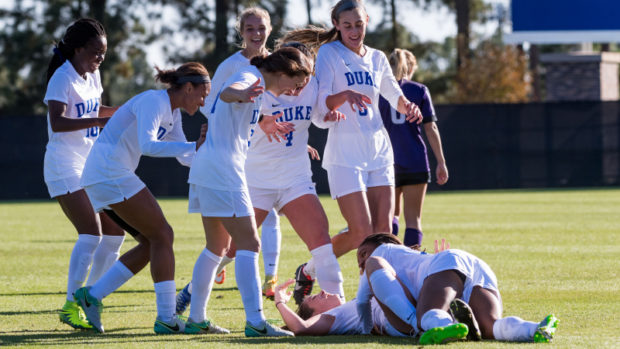 DURHAM, N.C. — It was hard to determine which excited the Duke Blue Devils more — advancing to the Elite Eight with a 1-0 win over Northwestern, or being assured of having Thanksgiving dinner together at Christina Gibbons’ house.

“Whenever we’ve made it to the Elite Eight, we’ve had Thanksgiving at Christina’s house,” said senior co-captain Lizzy Raben. “A lot of people want to go home for Thanksgiving. Not us. We want to be together. This is right where we want to be.”

Yep. The Blue Devils are right where they want to be – still in the NCAA tournament and gaining momentum. After losing in the national championship game last year to Penn State, Duke is the only team still standing from last year’s College Cup. Penn State, Florida State and Rutgers were all eliminated.

“We want to get back to the College Cup and we know each step is important,” said Robbie Church. “It’s all part of the process.”

That process includes taking care of each challenge as it comes up and not taking anything for granted. The most recent step was getting past a Northwestern team that had allowed six goals all season, had lost only three times and seemed to be on a mission.

Much like it showed on Friday in the 3-1 win over Illinois State, though, Duke showed the qualities that earned a 15-4-3 record. The Devils outshot the Wildcats 15-0 in the first half and 22-2 for the game.

“They are very technical all over the field,” said Northwestern coach Michael Moynihan. “And they have good athleticism that can really hurt you. They spread the field well and make the field big and that makes it hard to play against them.”

The Blue Devils rarely gave up possession in the first half, as the Wildcats seemed content to stay organized and look for counter-attack opportunities, a plan that helped them rack up 17 shutouts in 22 games this season.

But Ella Stevens, a freshman from Grayson, Ga., assured there would be no 18th shutout when she poked home her team-high 10th goal of the year, a rebound from six yards out with 12minutes left in the half.

“I’m so proud of Ella,” said Gibbons. “She really came into her own at the right time.

Injuries earlier in the season to some of Duke’s top offensive weapons, players like Taylor Racioppi and Kayla McCoy, left a void that Stevens quickly filled.

Ella’s had a phenomenal year. She is a great soccer player and great soccer players show up in these moments,” said Church. “We lost some All-ACC players to injuries. It hasn’t been easy to get back to this point. The players and our senior leadership have been tremendous.”

Duke learned some lessons last year, and the most important one was how to make it to the national championship game. With that on their resume, the have been better equipped to approach this year’s run.

“We just don’t want it to end,” said Gibbons, a senior out of Raleigh. “We are enjoying it too much. We are a family and we want to stay together.”

“We have stayed focused all year,” said Raben. “It’s really a credit to the coaching staff. They have helped us focus on what’s next. When we hear someone talking about something (too far in the future), we put a stop to it.”

So now there’s a week to get ready to play West Virginia, in Morgantown to get back to where they were a year ago. And a very important part of that week will be spent at Christina Gibbons house.