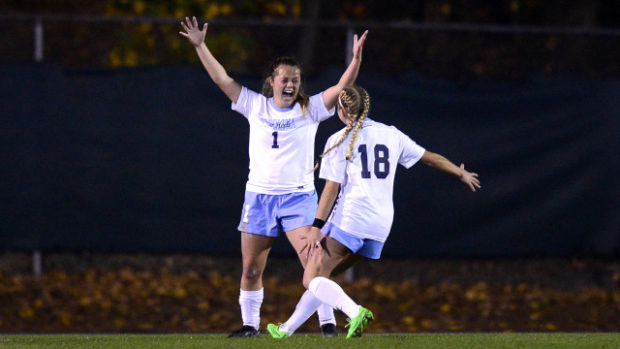 The second round of the 2016 NCAA tournament concluded Friday night with 16 teams advancing to the third round. South Carolina’s regional quadrant was full of exciting second-round matches but free of any upsets. Here’s a recap of all of the South Carolina quadrant second-round action:

For the second time in three NCAA tournaments, Arkansas was eliminated from tournament play via penalty kick shootout. This time, it was at the hands of Clemson, whose goalkeeper Kailen Sheridan saved two shots and converted one of her own to win the shootout 4-2 for the Tigers. The win marks the first time in 10 years that Clemson advances to the Round of 16 in the NCAA tournament.

Clemson was the stronger side for most of the match, outshooting the Razorbacks 19-13 overall, including five shots on goal. However, the Tigers two best opportunities on goal came late in the second half. The first of those two was a penalty kick awarded to Clemson after a Razorback player was called for a handball in the box. Katie Sprouse took the kick for the Tigers, but Razorback keeper Cameron Carter made a diving save to keep the Tigers from scoring. About five minutes later, Jenna Polonsky rifled off a shot, but it hit the crossbar and the Tigers were once again denied.

The game remained scoreless through two overtime periods and went to a penalty kick shootout. The Arkansas coaches made a goalkeeper change for the shootout, replacing Cameron Carter with Jordan Harris. Kailen Sheridan stayed in goal for the Tigers, letting two shots by her before stopping the third. She then took the third kick for Clemson and put her own shot past Harris, giving the Tigers a 3-2 advantage. She then stepped back between the posts and stopped the Razorbacks’ fourth shot attempt, and Claire Wagner buried her shot to end the shootout in a 4-2 win for Clemson.

The third-seeded Clemson advances to the Sweet 16, where they will take on the two seed and no. 6 UNC Tar Heels on Sunday, November 20 at 1 p.m. EST.

North Carolina, the no. 2 seed in their quadrant and the no. 6 ranked team overall, came back from a evenly matched first half to defeat the Kansas Jayhawks, 2-0.

Kansas came out strong, taking the first two shots on goals in the opening five minutes of the match. The first came from Lois Huechan, who scored the game-winning goal in Kansas’s first round win over Missouri last weekend, in the second minute, while Katie McClure followed it up with one of her own in the fifth. Tar Heel goalkeeper Lindsey Harris made the stop on both to prevent the Jayhawks from taking an early lead.

McClure took another shot in the 26th minute of the match, which would end up being the Jayhawks’ last shot of their NCAA tournament. Kansas’ attack weakened and it became a purely defensive effort for the Jayhawks as the Tar Heels’ attack took over. Despite the Tar Heels dominating possession in their offensive half for the final 20 minutes of the first half, the Jayhawks defense managed to send the match into halftime still scoreless.

The Tar Heels fired off 12 unanswered shots in the second half, and it did not take long for them to find the back of the net once they had retaken the field. In the 53rd minute, Madison Schultz scored the game winner when she fired off a shot from distance that hit the underside of the crossbar and deflected into the goal. Maya Worth would score an insurance goal with just over 10 minutes left in the match, putting the Tar Heels up 2-0.

Although the Jayhawks came out strong, the Tar Heels were too strong of an opponent for them, and ultimately UNC would prevail. The Tarheels advanced to the third round of the tournament, where they will take on ACC opponent Clemson on Sunday, November 20 at 1 p.m. EST. 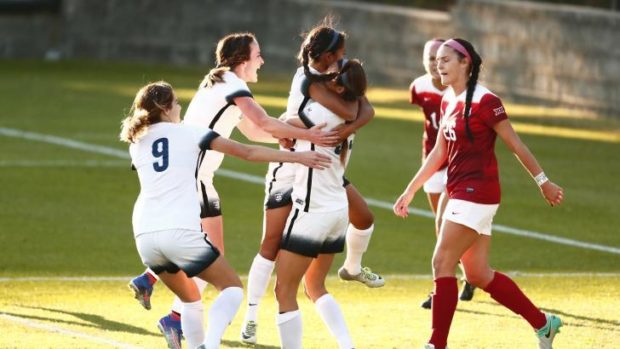 BYU celebrates after Ashley Hatch’s first half goal in their 2-1 win over Oklahoma in the NCAA tournament second round. (Photo courtesy of Jaren Wilkey and BYU Photo)

BYU defeated Oklahoma, 2-1, in the first match of the NCAA tournament second round. The match, which was played in Columbia, South Carolina, seemed to be dominated by the Cougars. Although both teams put four shots on goal, BYU outshot Oklahoma 14-6, and those extra opportunities ended up being the difference maker.

Ashley Hatch put BYU on the board early in the first half after BYU drove the ball down the left flank and Stephanie Ringwood Ney sent a perfect cross in right for Hatch, who headed it past Sooner goalkeeper Kassidie State. Michele Vasconcelos then put BYU on the board again when, in the second half, she received the ball near midfield, moved it down the left side of the field, shook off a defender and fired off a shot that hit the underside of the crossbar and bounced into the net.

However, BYU goalkeeper Hannah Clark could not get the shutout for BYU. In the closing 10 minutes of the match, Oklahoma finally found the back of the net. Clark’s goal kick went right to the feet of Sooner midfielder Shiloh Price, who chipped a ball over the field and to Lizzie Luallin. Luallin laid the ball off to Rachel Ressler in the box, where Ressler went 1v1 with Clark. Clark dove for the ball but missed as Price lobbed it over her and into the net. The goal would not be enough to overcome the deficit created by the Cougars, though, and Oklahoma were eliminated from the tournament.

BYU advances to the Sweet 16, the third round of the NCAA tournament, where they will take on the top-seeded South Carolina.

In the first ever meeting between the two teams, South Carolina defeated Colorado, 1-0. With the win, the Gamecocks advance to the NCAA tournament third round for the third time in program history.

The first half started off with an almost immediate shot on goal by Colorado, testing South Carolina goalkeeper Mikayla Krzeczowski right out of the gate. Colorado goalkeeper Jalen Tompkins was tested with two very close calls in the opening half, but one of those was cleared off the goal line by one of her defenders and the other was knocked out by a bad touch from a South Carolina player. Tompkins and Krzeczowski both had a number of saves in the first half, sending the match into halftime tied at zero.

Colorado’s biggest accomplishment of the night was slowing down the play of Savannah McCaskill, the biggest threat in the South Carolina attack. The Buffaloes applied heavy pressure to McCaskill all night, denying her clear looks on goals and knocking her crosses out of danger.

Not surprisingly then, it was not McCaskill who put the Gamecocks on the board in the second half, but senior Sophie Groff. In the 74th minute, Groff was fouled by Colorado goalkeeper Jalen Tompkins in the box, resulting in a penalty kick. Groff stepped up to the spot to take the penalty and easily put the ball past Tompkins, who guessed the wrong direction. That penalty kick would be the deciding factor in a match that was otherwise neck-and-neck.

South Carolina eliminates Colorado from the tournament and advances to the Sweet Sixteen round, where they will face the BYU Cougars. That match will be played on Saturday, November 19 at 7 p.m. EST.

Check back the Equalizer on Saturday as we begin coverage of the NCAA tournament third round matches!