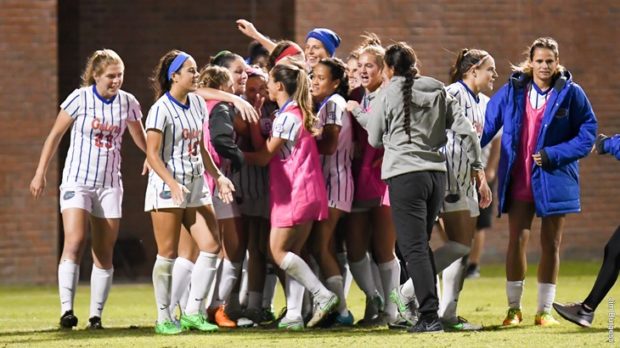 The second round of the 2016 NCAA D1 women’s soccer tournament kicked off on Thursday night, but all of the action in the Florida quadrant–a quadrant consisting of such top-ranking teams as Florida, USC, Florida State and Auburn–was played on Friday. There was a ton of excitement, a flurry of goals and even an upset in the Florida regional quadrant second-round play. Here’s a recap of what went down:

In a surprising turn of events, the #23 Utah Utes defeated the third-seeded #10 Florida State Seminoles, 2-1, to advance to the third round of the NCAA tournament.  Florida State had advanced to the College Cup, the name given to the tournament’s semifinal and final rounds, for the past five years. However, that streak was snapped with their loss today to Utah.

Utah struck first early in the first half on a play originating from a corner kick. Natalee Wells took the kick, and Natalie Vukic knocked the rebound in from the center of the box to give Utah an early lead. However, it would be a very short-lived lead as FSU would answer just four minutes later. Seminole Macayla Edwards finished a shot inside the far post from about 20 yards out to score the equalizer for Florida State. Another second piece was nearly as effective for the Utes when another corner kick was nearly put into the goal, but Natalia Kuikka headed the ball for a goal-line clearance to prevent Utah from once again taking the lead. Kuikka’s save would send the match into halftime still tied 1-1.

The second half was evenly contested between the two teams, as both teams had opportunities on goal that were stopped by Cassie Miller and July Mathias for FSU and Utah respectively. It wouldn’t be until the 87th minute that the game winning goal would be scored, when Utah’s Haylee Cacciacarne headed in a rebound and Utah regained the lead. Florida State almost tied things up in the very final seconds of the match, but the goal was called back after the player was ruled offside.

Utah advances to the Sweet Sixteen, where they will play the USC Trojans.

Despite an early goal for Connecticut, the Auburn Tigers defeated UConn 4-1 to advance to the third round of the NCAA tournament. It’s the second consecutive year and only the second time in program history that Auburn has advanced to the Sweet Sixteen.

It looked as though UConn would be a tough opponent for Auburn when UConn’s Maddie Damm came out and scored from distance just 55 seconds into the match. However, Auburn would answer less than four minutes later when Kiana Clark caused a turnover and sent the ball to Brooke Ramsier, who then sent the ball to Kristen Dodson. Dodson sent a bouncing shot in on target, and UConn’s goalkeeper, Emily Armstrong, was unable to make the stop.

It looked as though the game may be tied at one at the half, but the Ramsier sisters switched to fourth gear and worked to put a pair of goals on the board. B. Ramsier took a corner kick that Gianna Montini, who stood unmarked in the box, headed the ball over Armstrong to give Auburn its first lead of the match. Casie Ramsier would then send a pass to B. Ramsier just minutes later, and B. Ramsier would bury that one in the back of the net to extend the Tigers’ lead. The match went into the half 3-1 in favor of Auburn.

Freshman Bri Folds made it 4-1 for Auburn with just under 20 minutes left in the match after receiving a pass from C. Ramsier near the top right corner of the box. That goal would be the final goal of the match, and Auburn would walk away victorious.

With the win, Auburn advances to the third round of the NCAA tournament, where they will take on Florida.

In a battle of the No. 7 USC narrowly avoided being upset by Texas A&M by winning 4-3 in penalty kicks. The win not only advanced USC to the Round of 16 in the tournament, but it also ended Texas A&M’s shootout win streak at 10.

Despite outshooting Texas A&M 26-10 throughout 110 minutes of play, USC could not find the back of the net. That was largely because of goalkeeper Danielle Rice, who tallied nine saves on the contest. She also collected a number of crosses to prevent the Trojans from getting additional opportunities on goal. Finishing was also a factor for the Trojans, though, as the majority of their shots were off the mark. Although Texas A&M only put up four shots on goal all match, Brittany Crabtree thought she had scored one for the Aggies in the last 10 minutes of the first half, but it the referee ruled it a no goal, saying she kicked the ball out of goalkeeper Sammy Jo Prudhomme’s hands.

Texas A&M nearly got on the board in the second half in the 59th minute, but Prudhomme was there to make the save. The Trojans nearly scored the game winner in the final seconds on regulation, when Morgan Andrews tried to chip Rice, who had come off her line, from about 20 yards out. However, McKayla Paulson was there to make the defensive save, kicking the ball clear as the last seconds on the clock ran out. The game remained scoreless and was sent into overtime.

Once again, the Trojans outshot the Aggies in overtime, but neither time could finish. With the game going to a penalty kick shootout, it became a battle of the goalkeepers. Both Prudhomme and Rice made one save a piece, but the Aggies’ fourth shot missed when it hit the crossbar. At the end of five rounds, the Trojans had defeated the Aggies 4-3 in penalties.

In one of the arguably most exciting games of the entire tournament, Florida defeated Wisconsin, 3-2, with a second-overtime golden goal.

The scoring action did not start until the second half despite a number of very close calls in the first half for both teams. The first two goals were a pair of converted penalty kicks, one for each team. Florida was awarded their penalty kick first after Badger defender Morgan Taylor fouled Meggie Dougherty Howard in the box. Dougherty Howard easily made her shot from the spot, putting Florida on the board first. Minutes later, Wisconsin was awarded a penalty kick after Florida’s Julia Lester took down Sydney McGinnis near the endline. Micaela Powers stepped to the spot for the Badgers, and she converted her kick to level the score, 1-1.

Wisconsin got the go-ahead goal about 10 minutes later when Allie Wintefield sent a cross in front of the goal that prompted Gator goalkeeper Kaylan Marckese to come off her line to jump on the ball. Marckese failed to collect Winterfield’s cross though, and Dani Rhodes put the loose ball into the back of the net. The Badgers’ one-goal lead would be short-lived, as the Gators answered less than two minutes later. Dougherty Howard sent in a corner kick to just outside the six-yard line, where Savannah Jordan and two Badgers went up to battle for the ball. Jordan’s presence pressured Badger midfielder Alexis Tye to try to head the ball clear, but her header went into the back of the net for an own goal to once again tie the game.

The game would remain tied throughout the remainder of regulation time and all of the first overtime period. However, with just three minutes left before the game would be sent to penalty kicks, Mayra Pelayo sent a through ball to Dougherty Howard, who then found Brooke Sharp in the middle of the box. Sharp one-touched the ball past the keeper and into the back of the net for the golden goal.

That golden goal advanced Florida to the Round of 16, where they will take on the Auburn Tigers. In the teams’ last meeting during the regular season, Auburn defeated Florida 3-0 in Gainesville, so the Gators will certainly be looking for redemption when it matters most. The two teams will play in the third round on Sunday at 2 p.m. EST.

The NCAA tournament third round action kicks off Saturday night, but all of the Florida regional quadrant action takes place on Sunday. Check back with The Equalizer as we continue our NCAA tournament coverage this weekend!