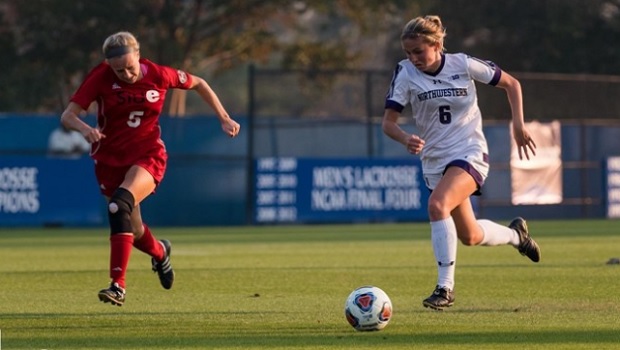 DURHAM, N.C. — After their season ended with a 1-0 loss to Northwestern in the second round of the NCAA tournament, the Southern Illinois Edwardsville Cougars met for 20 minutes on the track behind Duke’s Koskinen stadium.

There were, of course, tears and hugs and heads hanging, the types of things you see when teams get together and realize their season had just ended.

“This is a pretty close group,” said SIUE coach Derek Burton. “They enjoy playing together.”

It’s very unlikely they ever enjoyed playing together more than they did seven days ago. That’s when SIUE, with their 10-7-4 record, a team that upset No. 1 seed Murray State and second-seeded Eastern Kentucky in their conference tournament just to get to the NCAAs, defeated second-seeded Notre Dame.

The win in South Bend, which the Cougars claimed in penalties after no one could score in regulation and overtime, set up a second-round meeting with Northwestern on the campus of Duke University. And while he effort was there, SIUE’s magic was not.

“I told the team they have a lot of be proud of,” said Burton. “And they are all super proud. This was just another lesson on how small the margins between winning and losing are.”

Northwestern, 16-2-4, got the only goal of the game in the 10th minute when Cassidy Gorman took a long ball over the top from Kaitlin Moore and beat SIUE goalkeeper Juli Rossi from 15 yards for her team-high sixth goal of the year. SIUE argued unsuccessfully that Gorman was offside and the Cougars bench received a warning for their efforts.

“I was between the center backs and Kaitlin split them perfectly,” explained Gorman. “I reached as far as I could because the keeper was coming fast. I just got a toe on it and slid it under the keeper.”

The Cougars started off the second half trying desperately to equalize, pinning the Wildcats in their own end for most of the first 15 minutes. Northwestern, however, played some drama-free defense and handled the Cougars attack smoothly.

“We had some rough spots and we had opportunities to put the game out of reach,” said Northwestern coach Michael Moynihan. “The style they play makes it difficult. “But we won and are moving on. That’s the objective.”

The Cougars accomplished their objective for the season a long time ago. But Burton will make sure future goals are higher.

“This is the standard now,” said Burton, who returns 22 players next season. “And it’s a realistic expectation. I want them to understand that it’s not okay just to get to the second round of the NCAAs anymore.”