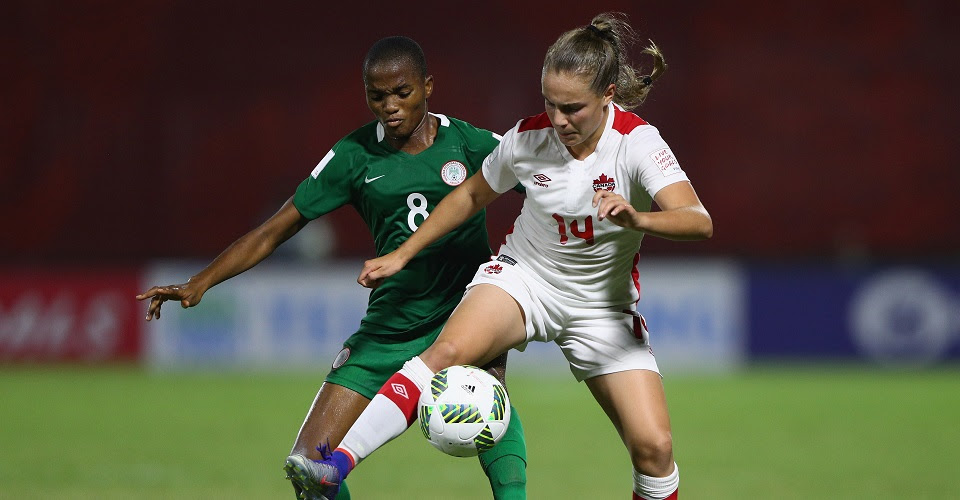 Canada’s U-20 Women’s World Cup is effectively over after a 3-1 loss to Nigeria on Wednesday, while Spain’s incredible rise continued with a 1-0 victory over Japan.

Canada conceded in first-half stoppage time and in the opening second of the second half to blow the lead that Gabrielle Carle granted with a goal in the 15th minute. Nigeria’s Chinwendu Ihezuo then sealed the victory with a tally in the 73rd minute.

[MORE: USWNT starts U-20 with scoreless draw vs. France]

The loss is Canada’s second in two games at the competition after being dominated in a 5-0 loss to Spain on opening day on Sunday. It’s back to the drawing board for coach Danny Worthington & Co., a disappointing stretch on the heels of Canada’s Olympic bronze medal at the 2016 Olympics on the senior level.

Second-half substitute Maria Caldentey stepped up to the spot in the 81st minute to score the lone goal of the match as Spain sunk Japan, 1-0. The game was a semi-rematch of the 2014 U-17 World Cup final, which Japan won, 2-0 over Spain. Several players on each team took part in that tournament.

Three different goal-scorers powered Korea DPR to two wins in two outings in Papua New Guinea. U Sol Gyong, Ri Hyang Sim and Jon So Yon all scored. Brazil goalkeeper Carla was marked for an own goal in the first half.

Stina Blackstenius, fresh off a silver medal at the Rio 2016 Olympics — where she scored twice — found the back of the net four times for Sweden in the rout of the hosts. She scored twice in each half.