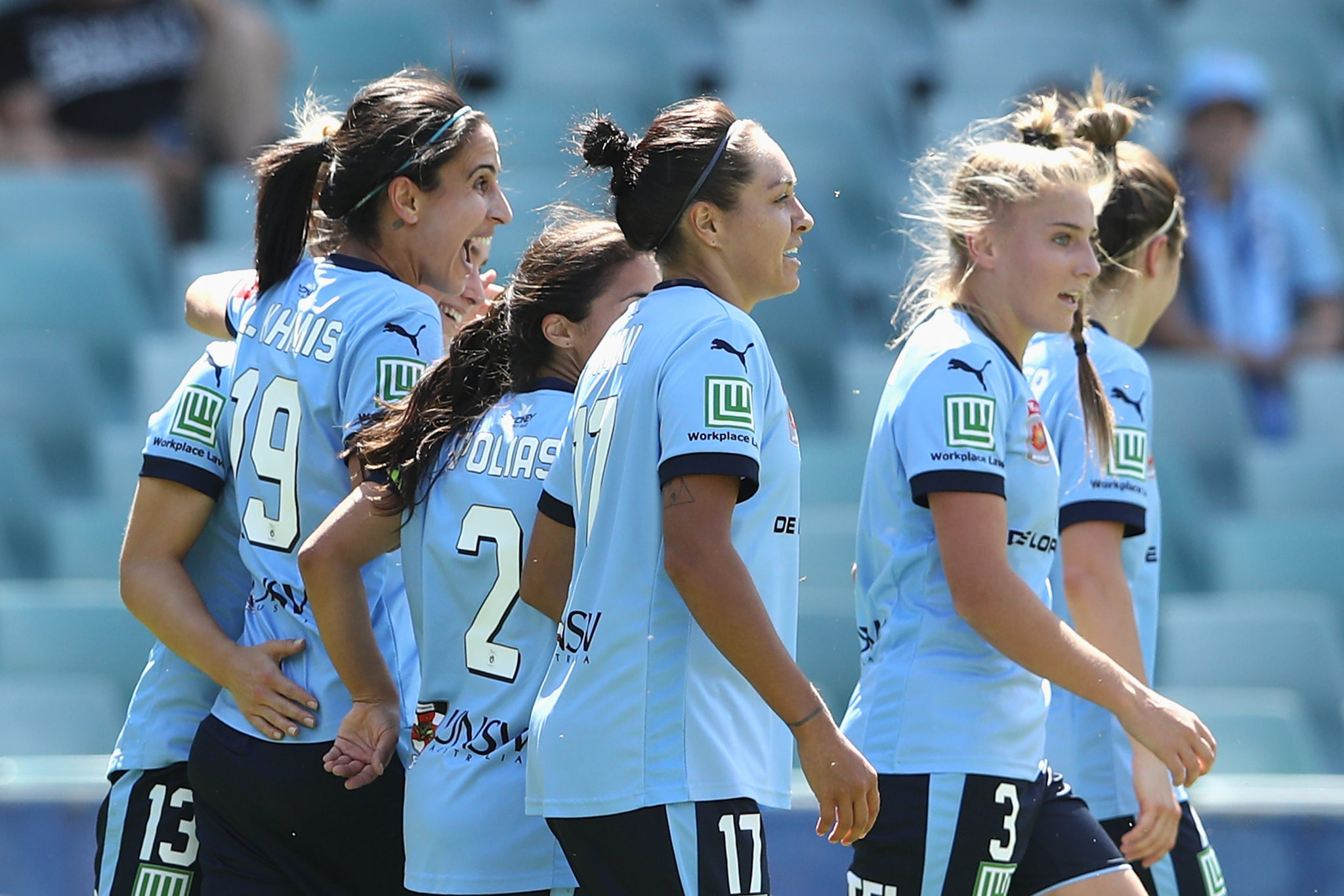 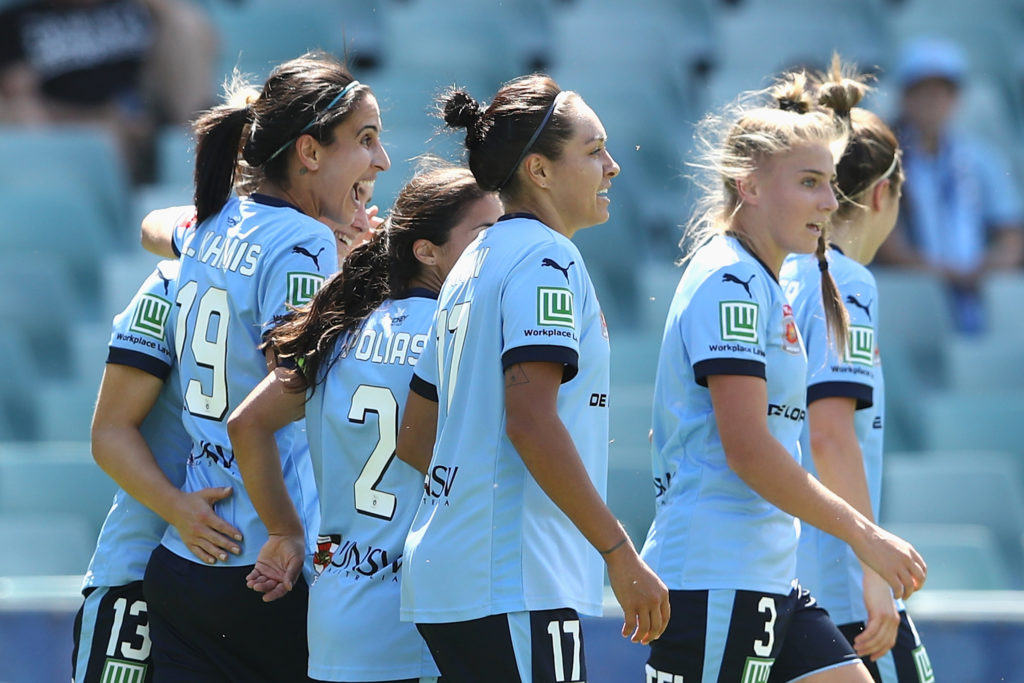 Melbourne City maintained its 100 percent record in the 2016/17 season with a 2-1 win over Canberra United in the capital city side’s home opener on Saturday, in front of a crowd of 2,595.

Laura Alleway (Orlando Pride) scored City’s first goal early in the match (18th minute), and then the 2015/16 champions doubled their lead in the 80th minute with a goal from Australian youth international Melina Ayres. Canberra pulled back a goal when Jasmyne Spencer (Orlando Pride) was fouled in the box late in the match and Ellie Brush (ex-Houston Dash) scored from the spot. Melbourne City stands alone at the top of the W-League standings with 6 points after two rounds of play.

There was no scoring in the Perth Glory and Brisbane Roar match in Perth on Saturday, but both teams remained undefeated with 4 points and tied for second in the league table. The crowd of 659 saw the visitors twice have goals (by Emily Gielnik and Sunny Franko) waived off for offside in the first half. At the end of the match, Brisbane substitute Allira Tobey almost took advantage of Mexican 2015 World Cup and ex-Houston Dash defender Arianna Romero’s turnover in the box, but fellow defender and veteran Matildas defender Kim Carroll cleared the ball and the danger away.

For Perth, NWSL loanees Alyssa Mautz, Vanessa DiBernardo (both Chicago Red Stars) and Nikki Stanton and Sam Kerr (both Sky Blue FC) all started, with DiBernardo subbing out for Australian U-17 international Jaymie Gibbons in the 53rd minute. For Brisbane, Maddy Evans—on loan from the Orlando Pride–played 90 minutes as did Australian internationals and former NWSL imports Clare Polkinghorne (ex-Portland Thorns) and Katrina Gorry (ex-FC Kansas City), while former Boston Breakers (WPSL Elite) forward Tameka Butt–who played this past season with Mallbackens of Sweden, after time in Germany with Frankfurt and Japan with Iga F.C. Kunoichi—entered the game midway through the second half as a substitute.

Australian international forward Leena Khamis scored two first half goals to power Sydney FC to a derby win over Western Sydney Wanderers; she now has 37 goals in 70 matches all time in the W-League, all with Sydney FC. A Sydney FC club record crowd of 4,178 watched the derby, which was the second highest attendance ever for a Westfield W-League regular season match, behind a 14,068 Melbourne Victory gate in 2014/15. For Sydney, NWSL loan players Kyah Simon (Boston Breakers) and Alanna Kennedy (Western New York Flash) played all 90 minutes. For the Wanderers, NWSL loan players Kendall Fletcher (Seattle Reign), Alex Arlitt (FC Kansas City), Paige Nielsen (Seattle Reign) and Katie Stengel (Washington Spirit) all played 90 minutes except for Arlitt, who was substituted out at halftime. Katie Stengel appeared in her first match in the W-League. Sydney FC now leads the series over their Western neighbors with a 7-1-1 mark all time.

Newcastle Jets earned an emphatic 4-0 road victory at Melbourne Victory, with Megan Oyster (8th minute), Arin Gilliand (14th) and Emma Stanbury (25th) scoring within the first half hour. Jenna Kingsley, who has one cap for Australia at the senior level along with time with the Matildas U-17 and U-20 sides, scored the Jets’ fourth goal late in the match. Jen Hoy and Gilliland (both Chicago Red Stars), Oyster and goalkeeper Kelsey Wys (both Washington Spirit) all started with the Jets, with Hoy subbing out at the hour mark. For the Victory, goalkeeper Bianca Henninger (Houston Dash), Samantha Johnson (Chicago Red Stars), Christine Nairn (this week traded from Washington Spirit to the Seattle Reign for the 2017 season) and English international Natasha Dowie (Boston Breakers) all started the match. Johnson subbed out at halftime for Gulcan Koca, the long-time Victory player who is an international midfielder for Turkey. This win represented only the Jets third all-time win against the Victory in 13 matches. The game attracted 270 fans in Melbourne, the lowest gate of the weekend.

Adelaide City had a bye this week.

Melbourne City leads the W-League with 6 points, Brisbane and Perth are tied for second with 4 points, Newcastle and Sydney FC are tied for fourth with 3 points, Adelaide and Melbourne Victory are tied for sixth with 1 point and Canberra United and Western Sydney Wanderers are at the bottom with no points.