US, France end scoreless to open U-20 World Cup 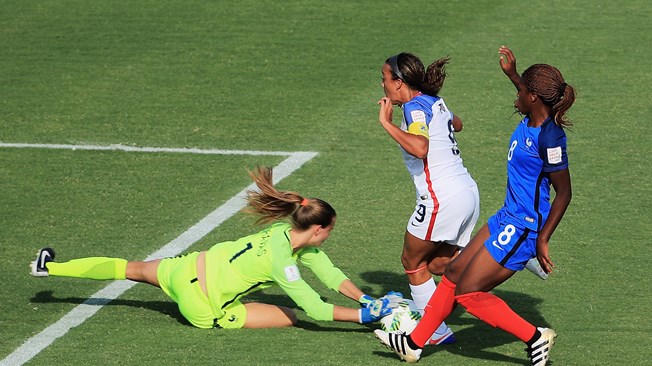 The United States opened its 2016 U-20 Women’s World Cup campaign with a scoreless draw against France on Monday in Papua New Guinea. The U.S. was out-shot 17-3 by France.

Olympian and U-20 captain Mallory Pugh had the best opportunity of the night for the U.S. in the 31st minute, but she was denied by France goalkeeper Mylene Chavas.

?? USA's best chance came from a solo run from Mal Pugh hit it right to the keeper. She was pretty much their lone option all game. #U20WWC pic.twitter.com/we3v6Xq2jk

“What an absolutely incredibly athletic team France is,” said U.S. head coach Michelle French. “They gave us all that we could handle and then some. They have personality players, they can take on and they can serve. With that being said, I could not be more impressed with the effort, grit, and the attitude of our team to compete. At the end of the day, we had a couple of opportunities to win so it was a great first game of our group.”

Elsewhere in Group C, New Zealand defeated Ghana, 1-0. The U.S. next plays at 4 a.m. ET on Thursday against New Zealand.

In Group D, Germany got off to a winning start with a 3-1 result over Venezuela, and Mexico won in style, beating Korea Republic, 2-0. Both of Mexico’s goals came from wonderful individual skill: