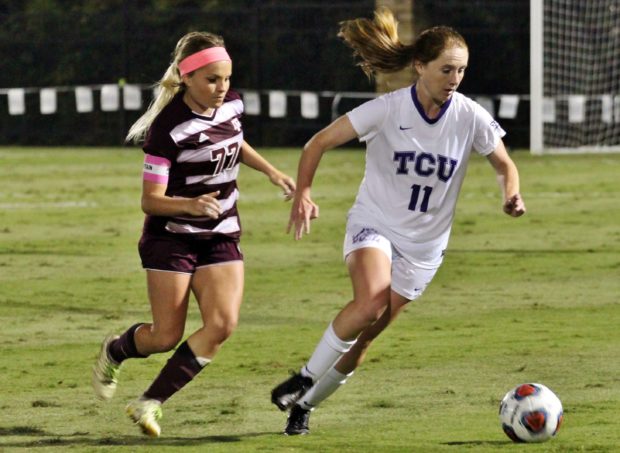 photo by Chelsey Bush for The Equalizer

Texas A&M advanced to the second round of the NCAA Championship for the 19th consecutive season as they defeated TCU, who made their first NCAA Tournament appearance, by an early goal. An announced crowd of 2294 filled Garvey-Rosenthal Soccer Stadium in Fort Worth, Texas, to grass seating and standing room only on a slightly chilly Saturday night.

The Aggies drew first blood in what ended up being the game winner in the 7th minute. Midfielder Haley Pounds took the ball up the left flank and sent in a cross that midfielder Mikaela Harvey tapped back to Stephanie Malherbe, who sent in a left-footed shot above TCU goalkeeper Katie Lund.

“The early goal by Steph that put us ahead allowed us to play from the lead and allowed us to not take ourselves out of shape too much,” said A&M coach G. Guerrieri, pointing out that this is only Malherbe’s second career goal, her first also an important game winner against top five-ranked Florida last year.

Malherbe, a junior midfielder who played in the Rio Olympics with the South African Women’s National Team, agreed. “I think it was a great way to start the game. I think it gave us a lot of momentum right off the bat.”

TCU responded immediately with a series of two corners, forcing Aggie goalkeeper Danielle Rice into a huge save as she tipped a shot by forward Emma Heckendorn just over the crossbar. Rice, a constant vocal presence out of the back, played a key role in the Aggies’ victory, maintaining her clean sheet with four saves. Guerrieri said that Rice had an outstanding game and mentioned that she has been “exceptionally special” all season.

TCU found space throughout the first half on their right flank with outside back Ryan Williams bombing forward, but sophomore defender Kendall Ritchie was up to the task, coming up with several big stops.

“She did a super job, she’s someone who has really grown into that position, not just as a defender but also being able to step forward and help us to keep the ball,” Guerrieri said on Ritchie, also singling out right back Grace Wright as a player who stepped up.

The Horned Frogs came out with strong offensive pressure in the second half, looking for an equalizer to force extra time. Midfielder Kayla Hill led the charge, consistently pushing herself into dangerous situations in the center of the field and sending a shot just over the crossbar with fifteen minutes to go. She and Heckendorn had three shots apiece as TCU outshot A&M 11-4, earning five corner kicks to A&M’s one. 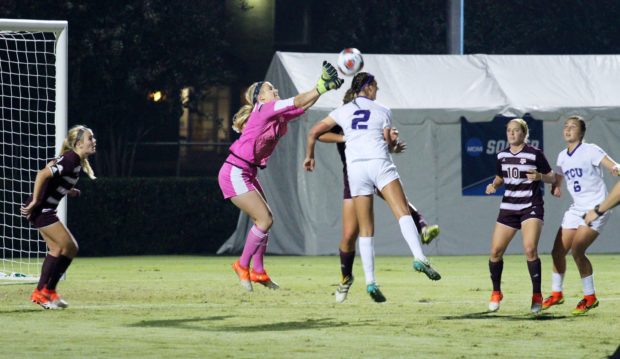 photo by Chelsey Bush for The Equalizer

TCU’s best chance to equalize came in the 66th minute, when Heckendorn received the ball from defender Courtney Forte and sent the ball across the face of the goal past a wrong-footed Rice, missing an open net by inches.

With the end of the season on the line, the game grew increasingly physical. The teams combined for a total of 19 fouls, although no cautions were given out.

“It was definitely high contact out there,” said Malherbe. “I think it just shows the intensity of this kind of game and I think it’s exactly what to expect with two teams in an NCAA match. This isn’t conference anymore.”

TCU defender Lauren Sajewich agreed. “In a game like this, emotions are high. It’s a high-stake game. If you don’t win, then you don’t go on. It’s just a testament to how badly [the] girls wanted it. They fought hard, we fought hard.”

Despite TCU’s late push, sending numbers forward and quickly restarting play on dead balls, Rice and her backline held together with some scrappy defense to preserve the win.

TCU coach Eric Bell said the team just couldn’t come back from the early goal. “Prior to that [goal] and after that, I thought we had the lion’s share of the ball. We had the ball up until the final third but we weren’t particularly dangerous in the final third, not as much as I thought we could be.”

“I thought we had the ball … the majority of the game, had some dangerous chances, maybe a few more we would have liked, to get that equalizing goal and have the motivation from there to go win the game,” said Sajewich.

Although it ended earlier than they hoped, TCU’s historic season wasn’t lost on Sajewich.

Texas A&M will face number two-seeded USC on Friday in the second round of the NCAA Championship.