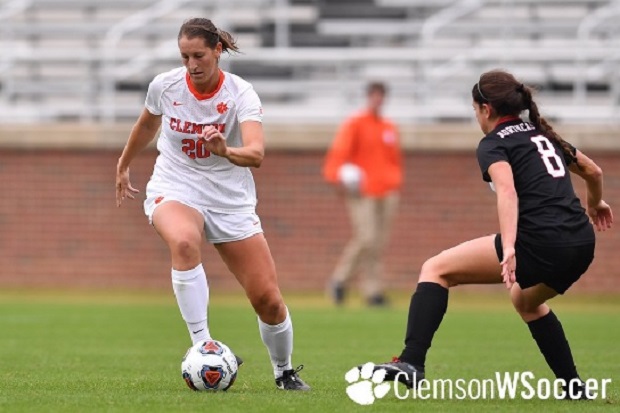 The first round of the 2016 NCAA D1 women’s soccer tournament concluded on Sunday afternoon after 32 games were played over three days . Here’s a quick recap of this weekend’s playoff action in the South Carolina quadrant of the tournament bracket:

What started out as a gray, dull day in South Carolina turned into a sunny celebration for the Clemson Tigers, as they eliminated Northeastern from NCAA play with a 1-0 win.

Shannon Horgan scored Clemson’s game-winning goal when she rocketed a shot past Northeastern keeper Nathalie Nidetch, who took to the air put could not get her fingers on the ball. The goal was assisted by Jenna Weston, who had a number of shots on goal only to be denied by Nidetch. Nidetch was by far the hardest working player on the field for Northeastern and the goalkeeper that was tested the most.

With the win, Clemson advances to the tournament’s second round, where they’ll face the Arkansas Razorbacks.

In the final first round match of the NCAA tournament, Kansas beat Missouri 1-0 in the second overtime period.

The match remained scoreless throughout the first 100 minutes of play time, despite both teams having a number of close calls on goal. Missouri’s Erin Webb had a blasting shot just skim over the crossbar well into the second half, and Kansas was making Mizzou goalkeeper Kelsey Dossey work hard to keep them off the board.

However, it would take less than a minute into the second overtime period for Kansas, who seemed to find their offensive spark in the second half of regulation, to find the back of the net. Kansas almost immediately moved the ball into their final third, where Grace Hagan connected with Lois Heuchan just outside of the goal box, and Heuchan rifled a shot past Dossey for the golden goal.

The win sends the Jayhawks to the second round of the tournament to take on the UNC Tarheels. 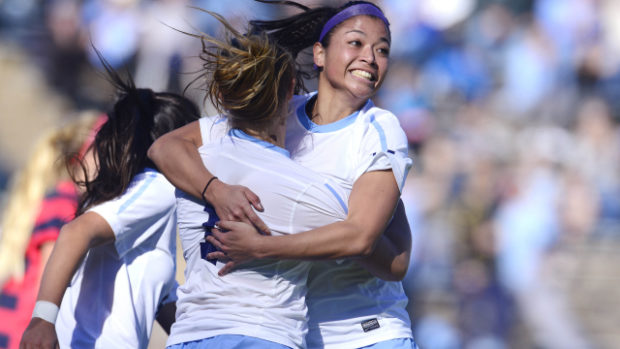 UNC celebrates their first round win over LIberty. (photo courtesy of Jeffrey A. Camarati and UNC)

Liberty University was no match for North Carolina as the Tar Heels easily defeated the Flames, 3-0, in the opening round of the NCAA tournament. UNC was the second seed in their quadrant after falling to FSU in penalty kicks in the ACC tournament final, whereas Liberty earned a tournament big after winning the Big South championship.

Although Liberty started out the match outshooting the Tar Heels, momentum soon swung in UNC’s favor, and they retook control of the match. Freshman Madison Schultz scored the game winner late in the first half after a series of quality passes led to Schultz’s look on goal. Dorian Bailey scored in the second half after her initial shot was deflected by a Flames defender, but she was able to bury the rebound in the back of the net. Abby Elinsky scored UNC’s third and final goal with about 20 minutes left in the match after Annie Kingman sent a ball to Elinsky, who headed the ball into the net.

The win sent Liberty home and UNC to the tournament’s second round, where they’ll face Kansas.

Oklahoma State was its own worst enemy as it scored two own goals to help Colorado win 3-1 and advance to the second round of the NCAA tournament.

The first goal for the Buffs happened when OSU’s Haley Woodard inadvertently headed in Danica Evan’s throw in past OSU goalkeeper Michela Ongaro and into her own goal. The second own goal happened when Natalie Calhoun headed the ball off of the far post and into the OSU goal as well.

The Cowgirls finally got a ball in the right goal in the second half when Courtney Dike moved the ball up the left flank and into the box, beat a defender and put a shot between Colorado goalkeeper Jalen Tompkins and the far post to put Oklahoma State on the board. However, Colorado would finally score one with just 12 seconds in the match when Evans beat Ongaro and easily put a shot into the net.

With the win, Colorado advances to the second round, where they face top seed South Carolina.

It was all South Carolina in the Gamecocks’ 7-0 defeat of Alabama State. The result is unsurprising as South Carolina remained undefeated throughout the regular seasons, suffering their first loss of the season to Florida in the semifinal round of the SEC tournament.

It was Alabama State’s first ever trip to the NCAA tournament, a huge accomplishment in and of itself, but they were no match for the speed and skill of the top-seed South Carolina.

In the first half alone, South Carolina had six goals scored by six different players. Savannah McCaskill played a huge role in many of them, scoring one goal and tallying multiple assists in the first half. Sophie Groff also came up big for the Gamecocks, scoring a goal in each half to walk away with a brace.

South Carolina now advances to the second round, where they will face Colorado. 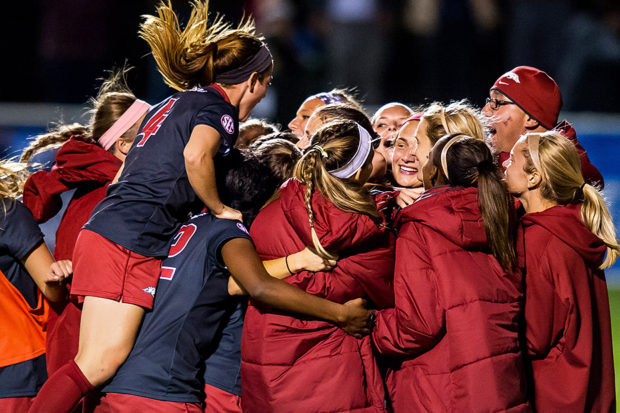 Arkansas just squeaked past Memphis to advance to the second round of the NCAA tournament. The Razorbacks defeated the Tigers 2-1 in overtime.

Chanel Hudson-Marks put the Tigers on the board just before the end of the first half after Necee Jennings sent a ball over the field and right to Hudson-Marks, who headed it past Razorback goalkeeper Cameron Carter.

Memphis maintained their lead into the final minutes of the match, but Lindsey Mayo scored the equalizer in the 88th minute to send the match into overtime. It would not take Mayo long to end the game, scoring the golden goal just three minutes into overtime.

With the win, Arkansas advances to the second round of the NCAA tournament, where they will taken on Clemson.

BYU shuts out UNLV, 2-0, to advance to second round

The fourth-seed BYU Cougars only needed one goal to defeat the UNLV Rebels, but they scored two to secure win and their spot in the NCAA tournament second round.

BYU controlled the match for most of the night, especially after Michele Vasconcelos’ goal in the 20th minute. Elena Medeiros scored the insurance goal in the opening minutes of the second half, burying a cross sent in by Paige Hunt Barker. Ashley Hatch, who received her first cap with the USWNT in October, was also a major contributing factor, possessing the ball well and creating multiple opportunities on goal for her teammates.

As the second half wore on, BYU began peppering the goal with shots, attempting to increase their lead even more, but UNLV goalkeeper Jordan Sallee came up big with multiple saves.

BYU will next face Oklahoma in South Carolina for their NCAA second-round match-up.

Oklahoma edges out SMU for first ever NCAA tournament win

The Oklahoma Sooners defeated SMU 1-0, their first ever win in NCAA tournament play.

The Sooners’ game-winning goal came in just the 12th minute off of a set piece play. Tori Bowman sent a free kick into the box from around midfield, and defender Paige Welch was able to head the ball in to put Oklahoma on the board. The goal was Welch’s first of the season, and with it Bowman recorded her third assist. Goalkeeper Kassidie Stade earned the clean sheet after making three saves to deny SMU from tying things up.

Oklahoma next faces a huge test in BYU, their opponent in the second round of the tournament.