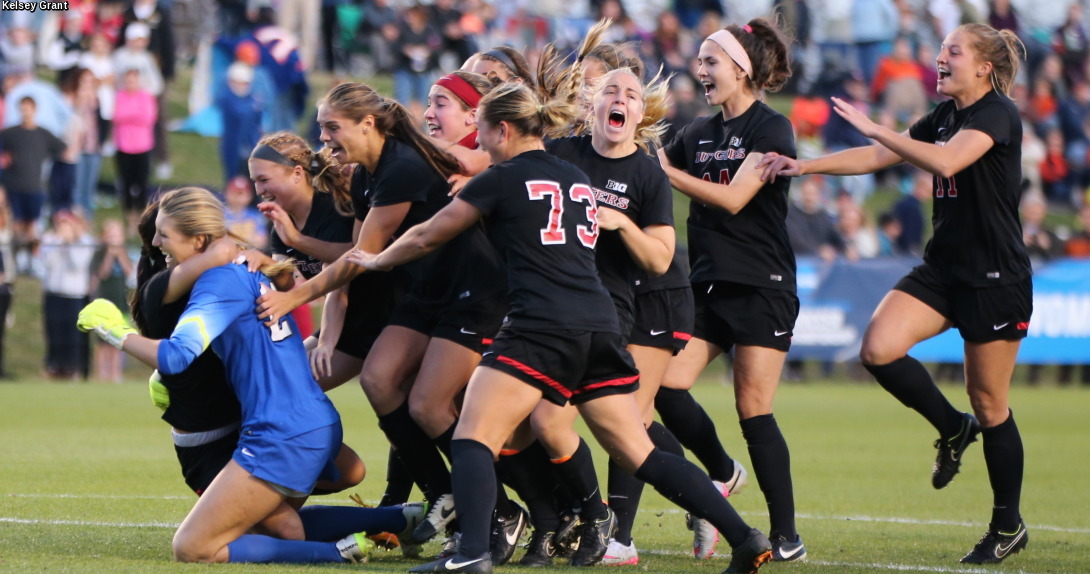 Here’s how the second day of action in Stanford’s quadrant shook out. Rutgers, a College Cup participant a year ago, along with Pepperdine, NC State and Santa Clara advanced. Santa Clara and Pepperdine won handily while Pepperdine and the Wolfpack needed penalty kicks to punch their tickets. Sunday, Georgetown earned the final spot in the second round for this quadrant.

For the first time in over two decades the Wolfpack will be playing in the second of the NCAA tournament. Minnesota, meanwhile, becomes the second-seeded team to fall in the tournament joining Notre Dame. The Gophers took a huge blow in the second half when Big Ten Forward of the Year Simone Kolander took a knock and had to exit the game. She was unable to return. Despite losing of one of its most potent offensive weapons, Minnesota did generate opportunities. The Wolfpack had their chances too but the game ended in a 0-0 stalemate after 110 minutes.

In the shootout, the Gophers struggled, converting just two of their four spot kicks. NC State meanwhile were perfect and won the shootout 4-2. The Wolfpack will play Pepperdine next Friday.

For the second straight year, the Broncos beat the 49ers 3-0 in the first round of the NCAA tournament. Santa Clara’s leading scorer Jordan Jesolva notched the game winner in the 12th minute of play when she collected a loose ball and fire a shot to the left corner past the keeper. Long Beach State kept it tight throughout the rest of the first half and had a good opportunity to equalize in just before the half, but Jessica Vincent’s look barely went over the crossbar.

The Broncos would extend their lead in the second half as Maddie Gonzalez recorded a brace. Her first goal was a long-range rocket in the 64th minute and the second was a well-executed chip over the keeper in the 83rd. Santa Clara will face Bay Area rivals Stanford in the second round next week.

Pepperdine Advances Over California In Penalties

The Waves got off to a hot start with a third minute goal from Danielle Thomas. Thomas headed in a free kick from Rylee Baisden for the tally. The score would remain 1-0 in Pepperdine’s favor until the 68th minute when Arielle Ship directed a cross from fellow senior  Ifeoma Onumonu into the net. The score would remain knotted a 1-1 through 110 minutes. The Waves ended the game with an 18 to 12 advantage in shots.

In a shootout between two elite goalkeepers, Pepperdine emerged victorious 3-2. Both sides converted their first spot kick. In the second stanza, however, Ship missed the net to give Pepperdine the advantage. Pepperdine failed to convert the next two, while the Bears went one for two. Mia Corbin missed on the fifth kick for California, setting the table for Pepperdine senior Rylee Baisden to score the game winner for her side. Pepperdine will meet NC State in the next round.

A first half brace from Madison Tiernan lifted the Scarlett Knights over Harvard Saturday evening. Tiernan scored her first in the 26th minute when she made a well-timed run, received Nicole Whitley’s pass and finished near post. Tiernan struck again in the 40th minute when she evaded Crimson defenders and finished from close range.  The score would remain 2-0 until the 83rd minute of play when Taylor Alymer scored on a pass from Colby Ciarrocca.

The Scarlett Knight defense did well to stifle Harvard’s attack. Harvard star Margaret Purce was limited to two shots on the night, both off target. Alana Jimenez recorded her 11th shutout between the pipes. Rutgers will play Georgetown in the next round of the tournament.

Rachel Corboz assisted both of the Hoyas goals Sunday in a 2-0 victory over St. Francis. Corboz set Grace Damaska up with a through ball in the 29th minute for the first goal. Damaska calmly finished bringing her total for the season to 14. Georgetown dominated play throughout and despite ample opportunity, the Hoyas failed to extend their lead further until the 52nd minute. Marina Paul headed in a corner kick taken by Corboz for the insurance goal. St. Francis