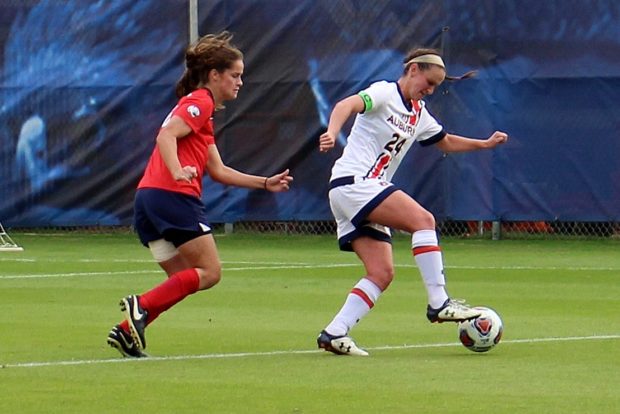 Casie Ramsier controls the ball against South Alabama in Auburn’s 4-0 win in the NCAA tournament first round. (photo by Allison Lee for The Equalizer)

Brooke and Casie Ramsier combined forces to lead Auburn in its 4-0 NCAA tournament first-round win over South Alabama on Saturday.

It took almost the entire first half for Auburn to get on the board, despite controlling the ball in their own offensive half for the majority of the half and putting a number of shots on and near target. South Alabama came heavy with pressure, and the repeatedly outmuscled Auburn on the ball. However, Casie Ramsier put the Tigers on the board with what would turn out to be the game winner with less than two minutes left in the half.

The second half was dominated by Auburn, who only allowed a few trips into the Jaguars’ offensive half in the final 45. The pressure that South Alabama brought in the first half weakened noticeably as the four-time reigning Sun Belt Champions tried to keep up pace with one of the top teams in the SEC. That allowed Auburn to control possession and add three goals to their total, including a brace by Brooke Ramsier and another goal by senior Haley Gerken.

Auburn advances to face UConn next Friday in the second round.

The Florida State Seminoles defeated the Samford Bulldogs, 4-0, to advance to the second round of the NCAA tournament for the 16th time in program history. The shutout was FSU’s 15th this season and the 40th career shutout for goalkeeper Cassie Miller.

It only took FSU three minutes to score when defender Natalia Kuikka, who had three assists on the day, sent a ball in from the right, and freshman Malia Berkely sent a shot in from near the penalty marker to put FSU on the board. Berkely’s game-winning goal was the first of her collegiate career. Megan Connolly increased FSU’s lead to 2-0 when she headed a free kick sent in by Kuikka past Samford goalkeeper Anna Maddox.

Deyna Castellanos had a shot saved early in the second half, but Katie Peters, who subbed in at keeper for Maddox, was not able to save Castellanos’ shot in the 55th minute, and the Seminoles went up 3-0. The final goal of the match was scored with approximately five minutes left in the match when Kuikka headed the ball towards goal and, as Peters came at to collect the ball, Heidi Kollanen raced onto it and headed it into the goal.

With the 4-0 result, FSU advances to the second round of the NCAA tournament where they will take on Utah.

After a grueling 97 minutes of scoreless play, Utah finally found the back of the net to defeat Texas Tech, 1-0.

Both teams had a number of opportunities during regulation, but no one could capitalize on any of them. July Mathias and Lauren Watson had multiple saves for Utah and Texas Tech respectively, and their strong play between the posts kept the game scoreless and sent it into overtime.

The golden goal came late in the first overtime period for the Utes, thanks to a Natalee Wells corner kick that found Katie Rogers in the box. Rogers was able to stab the ball into the goal and send Utah to the second round of the NCAA tournament.

Utah’s next opponent is the reigning ACC champion Florida State, who won the NCAA tournament back in 2014.

With a 3-1 win over Eastern Washington, USC advances to the second round of the NCAA tournament.

USC managed to score three unanswered goals in a 15-minute window in the first half, creating too large of a deficit for EWU to recover. Morgan Andrews put USC on the board first, although it initially looked as though EWU goalkeeper Mallory Taylor had made the save. However, the linesman ruled the ball went completely over the goal line and gave the goal to Andrews and USC.  Andrews then doubled USC’s lead after Savannah Levin was taken down in the box to give USC a penalty kick, which Andrews converted despite Taylor getting a hand on the shot. With just seconds left in the first half, Nicole Molen scored off a header to give USC a 3-0 lead at the half.

EWU would get one back, though, when Devan Talley headed the ball in for an EWU goal in the 59th minute. However, EWU would give up yet another penalty kick when Levin was once again fouled inside the box. Andrews lined back up to take the penalty kick, but this time Taylor made the save to deny Andrews from converting and scoring a hat trick for the day. USC was unable to add to their lead, and the game ended with a 3-1 win for the Trojans.

USC will next take Texas A&M in the second round of the tournament.

UConn knocks Albany out of tournament with 4-1 win

Alexa Casimiro put UConn on the board early in the first half when she managed to toe poke the ball past Albany goalkeeper Chloe Borasky. Stephanie Ribeiro would then increase UConn’s lead when she scored just minutes later. The goal was Ribeiro’s 21st for the season, and with it she retook the lead in NCAA points.

With under three minutes left in the first half, Albany answered with a goal of their own when Mariah Williams nutmegged UConn defender Toriana Patterson to score. The game went into the half with a 2-1 advantage for the Huskies.

UConn’s first half momentum continued into the second half when Rachel Hill came out and scored just six minutes into the half. Maddie Damm made it 4-1 when she scored a goal with 10 minutes left in the match. Mariah Williams scored a brace in the final minutes of the match when her “shross” went in for Albany’s second goal and the last goal of the match.

UConn advances to take on the no. 4 seed Auburn next Friday night in the second round of the NCAA tournament.

Florida finds its momentum in second half, defeats FGCU 3-0

What started out looking like a potential upset for the top-seeded Florida Gators turned into a comfortable 3-0 win over Florida Gulf Coast University.

The game remained scoreless all through the first half, with both teams struggling to generate much offensively. The second half started out much the same way, but momentum swung in Florida’s favor in the 66th minute when Meggie Dougherty Howard, MVP of the SEC tournament, opened up scoring for the Gators. Julia Lester followed with the Gators’ second goal of the night, and Savannah Jordan capped the game off with a goal of her own.

Florida advances to the second round of the NCAA tournament where they will face Wisconsin. 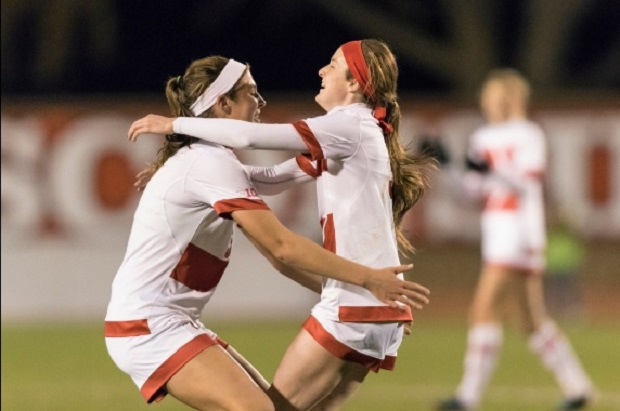 In the second first-round match of the bottom left mini-bracket, the University of Wisconsin defeated Marquette University 1-0.

Rose Lavelle scored her sixth goal of the season to put Wisconsin on the board in the first half. The Badgers dominated the match, outshooting the Golden Eagles 11-6. Goalkeeper Caitlyn Clem had three big saves to secure the win and earn the clean sheet.

With the win, Wisconsin advances to the second round of the tournament, where they will take on Florida.