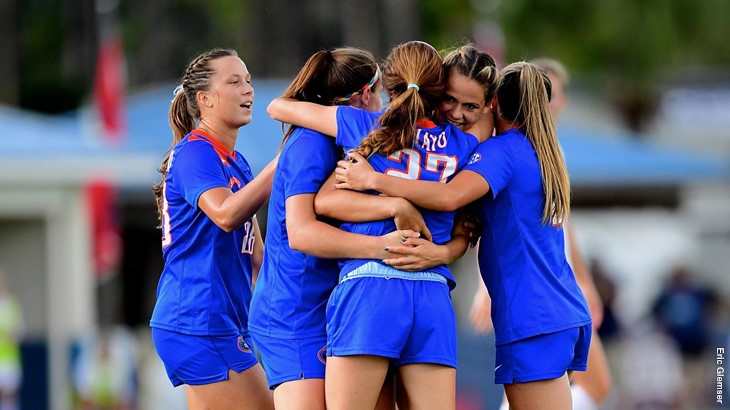 As the NCAA tournament kicks off today, here’s a look at some of the teams and first round matchups to keep your eyes on. In truth, the first round is generally not the best in terms of tantalizing, competitive play. Nonetheless, viewers can still expect upsets, stunning goals and the overtime time drama that comes with win-or-go-home tournaments.

No surprises here. If you’re a top seed, you’ve got a good chance of making it. Last year, two one seeds, a two seed and a three seed made it to the final weekend. History shows that we can expect a similar distribution this year.

The Cardinal has always been on women soccer fans radar but recent call-ups to the U.S. national team for goalkeeper Jane Campbell and midfielder Andi Sullivan have put Stanford even more in the forefront. In truth, aside from Campbell and Sullivan, who will miss the team’s first game against Houston Baptist because of USWNT duty, Stanford is full of talent all over the field.

Even though Sullivan will miss a game, she is the player to watch in this tournament. Given her responsibilities on both sides of the ball, it’s easy to see the parallel between her and last year’s Mac Hermann winner and College Cup Final hero Raquel Rodriguez.

Aside from Sullivan, who has 11 goals the team has four other players with at least 5 goals. That means that their title hopes are somewhat insulated for a mercurial player having an off night.

The Mountaineers are one of the most accomplished schools that have yet to make a College Cup. However, that drought could end this season. Chock full of talented Canadian internationals this is an experienced side, not only in Canadian bronze medalists Ashley Lawrence and Kadeisha Buchanan but players that experienced the team’s run to the Elite Eight a year ago.

Last week, the Mountaineers nearly saw their 12 game winning streak end when the team went down 0-2 to TCU in the first half. The Mountaineers fought back to tie it up in the closing minutes and won it in overtime.  Buchanan, a center back poised to become one of the world’s best, moved to the forward line and scored that second goal. This illustrates what all of college soccer already knows; Buchanan, is a game-changer no matter where she is on the field, and that’s a huge asset to have in the tournament.

The question surrounding West Virginia is how the team will manage with several internationals gone for U-20 World Cup duty, including Canadian Rylee Foster, the team’s regular starting goalkeeper. The team does have experienced players to fill in the holes however like keeper Michelle Newhouse.

The Gamecocks saw their impressive undefeated streak end in the SEC tournament by fellow number one seed Florida last Sunday. Now, we’ll see what South Carolina has learned from its first loss this season.

While everyone is surely aware of the Gamecocks dynamic forward Savannah McCaskill, who has an impressive 16 goals and eight assists on the season, South Carolina’s defense has also been key in the team’s spectacular season thus far. In twenty games, the Gamecocks have allowed only 9 goals. While defense tends to be overlooked, it’s hugely important in tournament play, where one bad decision can end a season.

The Gators earning a top seed was one of the biggest surprises to come Monday’s selection show.  It’s not that the Gators aren’t a good team, it’s that they weren’t even in the discussion for one heading into last weekend. As late as a couple of weeks ago, Florida was only ranked no. 20 in the national polls. Oft repeated in sports is in the concept of peaking at the right time. Is Florida doing just that?

Savannah Jordan, the most prolific scorer the SEC has seen since Abby Wambach, will take center stage as Florida tries to become one of just a handful of schools with multiple national titles. While Jordan, who is incredibly deadly inside the 18-yard box is one to watch, fans wanting to get a glimpse of players likely to transition to professional game would do well to also take note of  senior Meggie Dougherty-Howard, a do-it-all midfielder, who quietly has been a huge key to the Gators’ success during her career there.

Ashley Hatch is an exceptional talent. That’s true. It’s also true that the Cougars are way more than just Hatch. For soccer fans who’s interest in the team was piqued by Hatch’s recent inclusion in a USWNT camp may find it interesting to know that Hatch did not win Player of the Year in the conference, that honor went to teammate Michelle Vasconcelos. Vasconcelos has 14 goals to Hatch’s 18, but she plays a bigger role in setting up the attack and involving other teammates. In all honesty, Hatch’s absence from the team impacted her stats which influenced the decision, but it still impressive that someone else what able to enough to beat her out.

Perhaps the most impressive thing about BYU is their ability to preserve despite challenges. Aside from losing their star player for a string of games while she was with the national team, they also had to deal with the loss of experienced netminder Rachel Boaz, who’s season ended prematurely after injury. Will having to deal with adversity help galvanize the team in tournament time?

Naysayers will say that the WCC isn’t a Power 5 conference and they’re right, but BYU has some quality results against some considerable competition. Only time will tell if the Cougars are can punch their ticket to San Jose.

Games To Watch This Weekend

This contest on Saturday will feature two elite goalkeepers in Hannah Seabert, a great shot stopper, who recently set the school record for all-time saves, and Emily Boyd, who’s incredible play in goal kept California in contests against UCLA and USC.

Offensively, California has the advantage with seniors Arielle Ship and Ifeoma Onumonu chipping in 10 each. Shipp, a composed finisher and the speedy Onumonu compliment each other well and are difficult for any backline to contend with. For the Waves, they will look to Rylee Baisden, who’s scored 6 goals this season. That total matches her offensive production for the previous three seasons combined.

For the second year in a row, these two west coast schools will face off in the first round of the NCAA tournament. The Broncos won last year and there’s not much like the “revenge factor” to turn the intensity up a notch.

Santa Clara doesn’t have the most impressive record but they did play one of the toughest schedules in the country. Now it’s time to see if that preparation pays off for the most important part of the season. Offensively, the Broncos are led by senior Jordan Jesolva who’s eight goals and four assists are team highs in each category. At the back,  they will rely on Icelandic international Gurun Arnardottir to shore up the defense.

The 49ers, who earned an automatic bid by winning the Big West tournament, have offensive firepower in Ashley Gonzales and Mimi Rangel, who earned offensive player of the year  midfielder of the year respectively for the conference. Rangel, a senior  who has the potential to play professionally, makes up for what she lacks in height with her intelligent play. On the other side of the field, a switch at the back has Long Beach State starting two freshmen in the center of defense. This switch paid dividends for Long Beach State during the season. A big question Saturday will be how will these two players hold up.

Last year the Big Ten sent two teams to the College Cup, Ohio State wasn’t one of them, but they did make a solid run to the Sweet Sixteen. Two Canadians internationals, Lindsay Agnew and Nichelle Prince,  the latter of which won a Bronze medal last August, are looking to end their careers as Buckeyes with a deep NCAA run. This team certainly has talent and should be battle-tested coming out of the conference with the most representation in the tournament.

This is an in-state game which also rackets up the intensity but the real intriguing part of this match is Ohio State’s opponent, Dayton. Dayton, a 7th seed in the A-10 tournament went into the postseason under .500. They then made an improbable run and won the conference tournament to gain a spot in the NCAA tournament.

The Flyers had extra motivation to make the big dance as their highly decorated head coach Mike Tucker announced at the beginning of the season that this would be his last after 22 years. If they win this weekend, expect  junior Alexis Kiehl to play a role. She won NSCAA player of the week honors this week after scoring 5 times in the A-10 tournament. She also is currently tied for most goals scored on season nationwide.